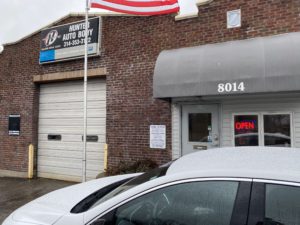 Safeco’s recent rejection of an appraisal agreement its contact indicates was binding isn’t the only report of questionable behavior by the insurer during the saga of a 2017 Volkswagen Jetta SE.

Both the Safeco policyholder, Suzanne Corbett, and her Missouri collision repairer, Hunter Auto Body, both recounted incidents at the start of the claim that has dragged on for half a year.

Hunter Auto Body general manager Kyle Motzkus said Corbett brought the Jetta to Hunter Auto Body on June 26, 2019, for what she thought was a minor repair of a scratch and dent on the door. The shop pointed out three dents on the quarter panel, and Corbett called that damage new and sought repairs there too, according to Motzkus. He said the quarter panel dents lent themselves to a glue-pull repair.

Motzkus said he explained then that refinishing to Volkswagen standards could push the repair from what might seem like a $3,000-$4,000 repair into one past $9,000. (Refinishing to the panel edge of a uniside, and then to the seamless roof, and then “carry over” because of the absence of seam on the other side, according to Motzkus.)

Hunter Auto Body had thought the Safeco adjuster would “be logical” and negotiate, for he’d been easy to deal with on other claims, Motzkus said. However, the insurer “didn’t want to hear it,” he said.

Motzkus acknowledged he could have been nicer during the interaction, but the adjuster wouldn’t even take the shop’s documentation.

Hunter Auto Body co-owner Jack Hunter said the Safeco representative barely spent any time in the shop and didn’t even try and facilitate the matter on behalf of the claimant. When Hunter tried to give the adjuster the information again, the adjuster said, “‘I’m not taking it.'”

Hunter said he asked what the adjuster meant — this was documentation explaining why the shop had to perform certain procedures.

The adjuster refused to take it again, and when Hunter asked for the rationale, the adjuster said “‘I’m done. And my supervisor told me to leave.'”

Hunter said he was leaning on the edge of the adjuster’s vehicle trying to hand him the paperwork, when the adjuster “throws it in reverse,” striking him with the vehicle mirror.

Hunter said he felt like: “‘Are you kidding me?'”

Corbett also recalled being told at the start of the process by Safeco that it would cover any additional damage beyond its estimate — except if it was found at Hunter Auto Body. “I would have to cover it myself,” Corbett recalled.

She recalled being told something to the effect of “‘Hunter Auto Body has a reputation'” and the insurer alleging it inflated claims.

“I’ve done business with these people (Hunter Auto Body) for thirty years,” Corbett said. She’s never had any problem, they perform “top-notch work,” and have even saved her money. The shop is I-CAR Gold and has stellar reviews.

She recalls thinking, “‘How could you say that?'”