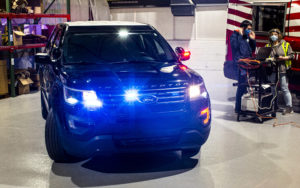 “Vehicles from the 2013 to 2019 model years make up the majority of Police Interceptor Utility vehicles currently in use by first responders,” Ford police brand marketing manager Stephen Tyler said in a statement. “Delivering this new capability to these vehicles first allows us to help as many officers as possible, as quickly as possible.”

The program cranks the engine to an elevated level and puts the interior heat and fan settings on high. This hits the passenger cabin with temperatures reaching what Ford called “hotter than Death Valley on its hottest day.”

“The software automatically monitors interior temperatures until the entire passenger compartment hits the optimal level, then that temperature is maintained for 15 minutes,” Ford wrote in a news release Wednesday.

The Ohio State University helped Ford figure out what temperature and duration to employ.

“Law enforcement officers are being dispatched as emergency responders in some cases where ambulances may not be available,” Ford police brand marketing manager Stephen Tyler said in a statement. “During one trip, officers may be transporting a coronavirus patient to a hospital, while another trip may involve an occupant who may be asymptomatic.” 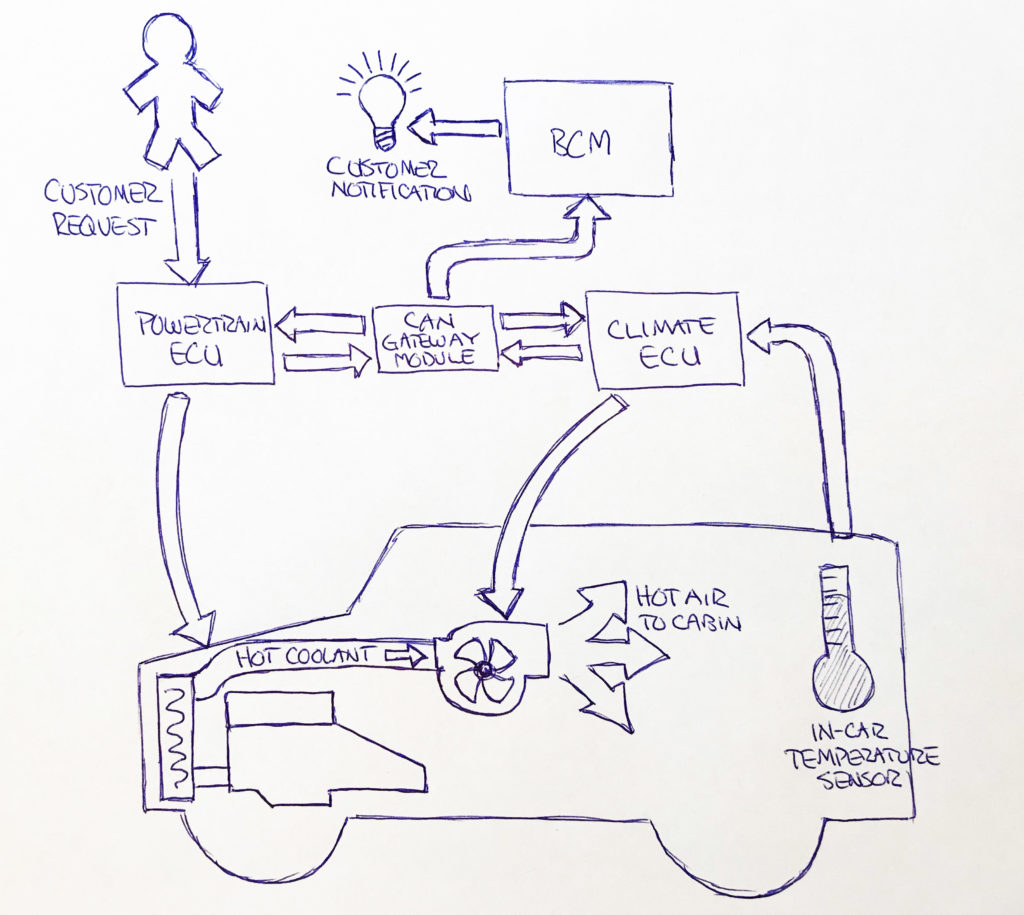 A police agency’s service center could introduce the update “using their own diagnostic service tools” or outsource the task to a dealership, Ford wrote.

Officers trigger the heating feature in 2016-19 Police Interceptor Utilities with “a smart sequence of commands that involves pressing cruise control buttons in a predefined order.” They initiate the mode in 2013-15 models with a tool plugged into the OBD-II port.

Collision repairers and other automotive aftermarket professionals have a similar need to protect staff and customers from the possibility of COVID-19 within a vehicle. Unfortunately, for now, Ford says it’s just focusing on law enforcement.

“No, the software solution pilot is currently only available on 2013 to 2019 model year PIUs,” Ford commercial vehicle communications manager Elizabeth Kraft told us in an email Wednesday. “We will monitor results from the pilot to determine if we will bring this software solution to other Ford police vehicles. We are only offering this solution on Ford Police vehicles at this time.”

Heating up the car, virus

The Centers for Disease Control hasn’t issued definitive guidance on what temperature kills COVID-19. In a FAQ last updated May 24, it wrote:

Ford itself described the heating as only a step to “supplement recommended cleaning methods,” 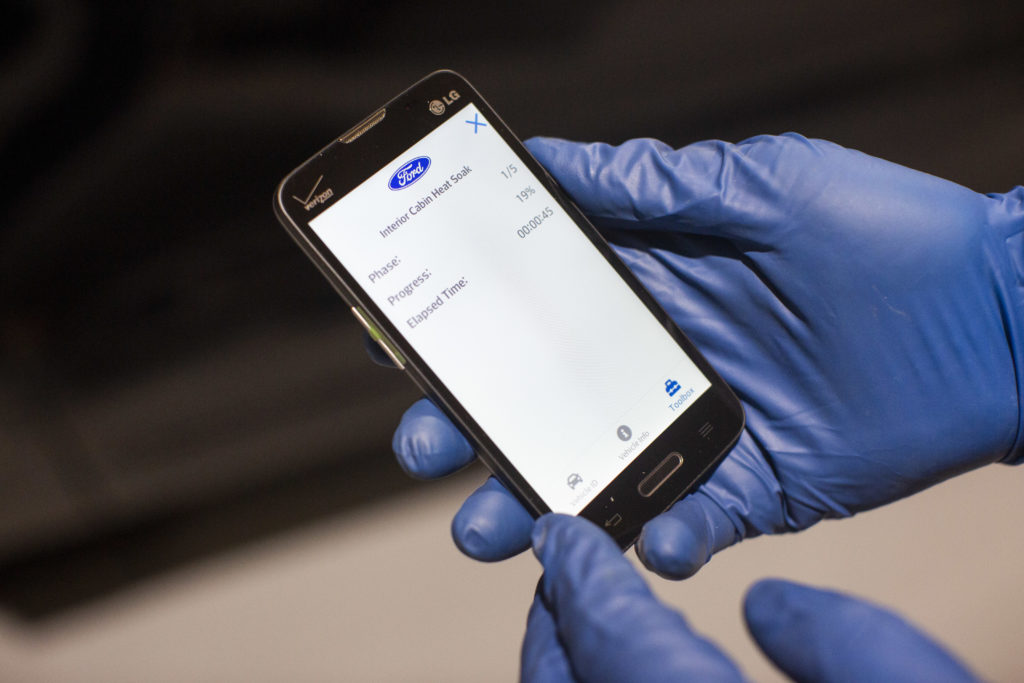 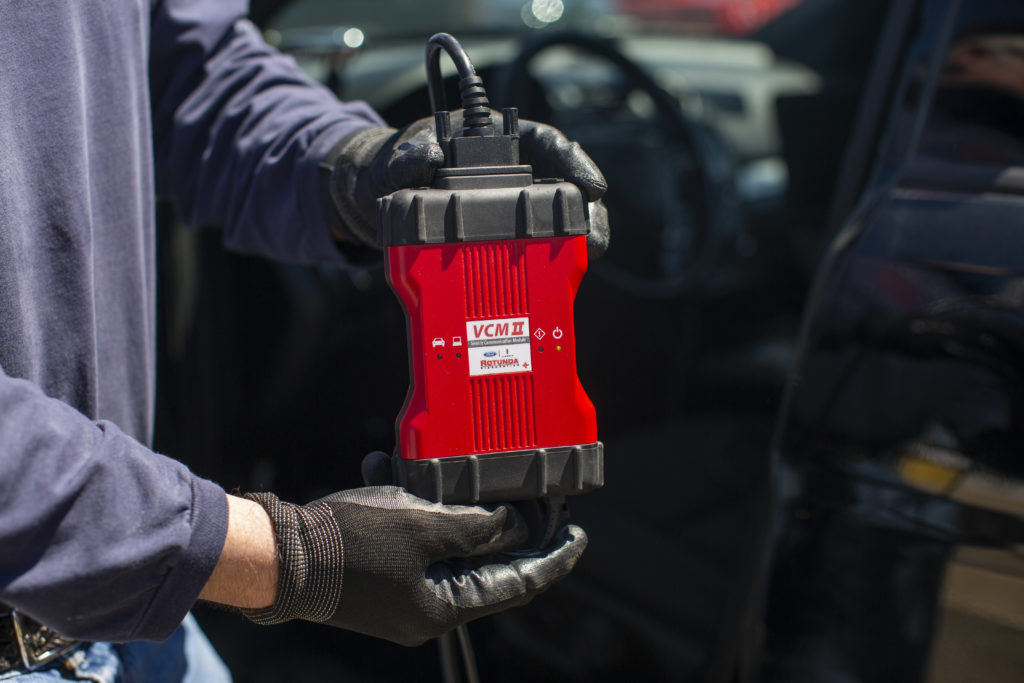 An April 2 Lancet study found “With the incubation temperature increased to 70°C (158 Fahrenheit), the time for virus inactivation was reduced to 5 mins.” At 56 Celsius (132.8 Fahrenheit), the virus was undetectable after a half-hour. But to the CDC’s point, the heat portion of the Lancet study didn’t factor in other variables like surfaces.

An April 28 Society of Collision Repair Specialists webinar featuring professional restorers and a body shop owner examined the idea of heating up a vehicle in a paint booth to kill COVID-19.

European Motor Car Works owner Kye Yeung noted that a downdraft paint booth might raise a roof temperature to 160 degrees, but the vehicle sides might only be 135 degrees, and the interior might be “substantially less.”

Encircle business development Vice President Kris Rzesnoski said the challenge with attempting to bake away the virus was keeping the surface temperature consistent. Any area not at that sustained temperature delivers a “false sense of security,” he said.

Heat might also lead to offgassing and affect vehicle materials, Rzenoski said, and Yeung said some electronics can only take a certain amount of heat before the ECU dies.

It’s not as easy as “butterflying” the doors open and leaving the vehicle at 160 degrees in the booth, Yeung said.

We asked Ford about the effect of such heat on vehicle electronics.

“While the temperature of the air coming out of the air registers in significantly hotter than regular use of the climate system, the peak temperatures are still below Ford’s design standards for thermal testing of the interior of a vehicle,” Kraft wrote.

We also asked about the idea of getting sufficient heat into all the nooks and crannies. “Yes, the heat blankets the surfaces and air of the vehicle to help hit those tough spots that might be difficult to reach or easily missed by manual cleaning alone,” Kraft wrote.

“When used in conjunction with sanitization guidelines approved by Centers for Disease Control and Prevention, flooding the passenger compartment with elevated air temperature can help reach areas that may be missed by manual disinfecting procedures,” Ford wrote in a news release. “Heat has the ability to seep into crevices and hard-to-reach areas, helping reduce the impact of human error in applying chemical disinfectants.” 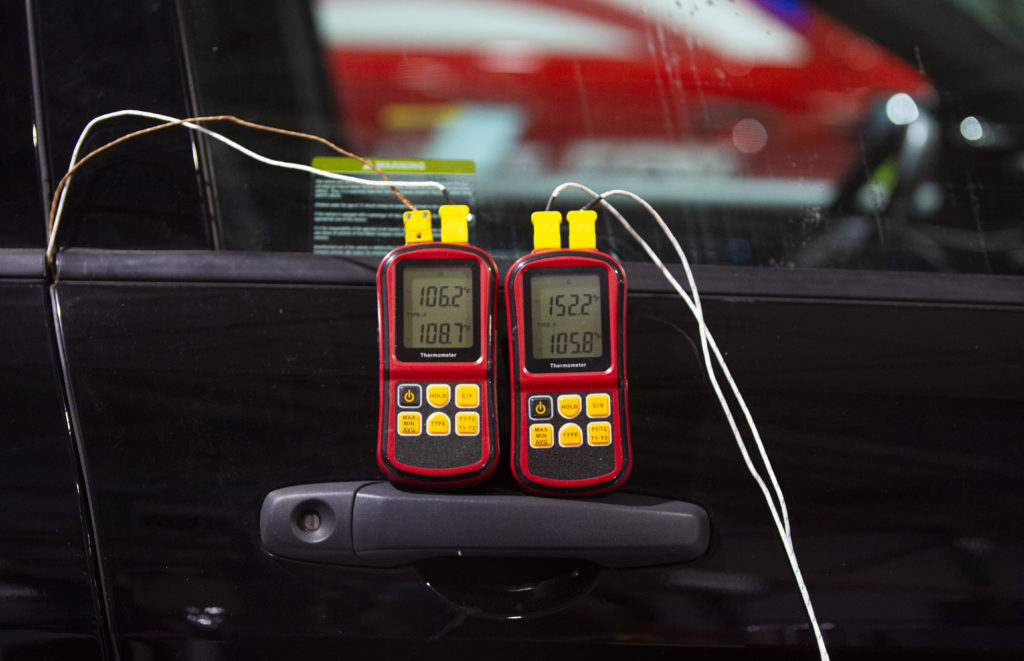 All that said, Ford also cautioned in the news release that it only could guarantee a factory Police Interceptor Utility would exceed 133 degrees.

“Ambient temperature, installation of partitions or other upfit equipment may impede temperatures from reaching the recommended threshold,” Ford wrote in the news release.

Cops can keep tabs on their SUVs’ progress through cues like an instrument panel indication and hazard lights and taillights flashing in a specific pattern.