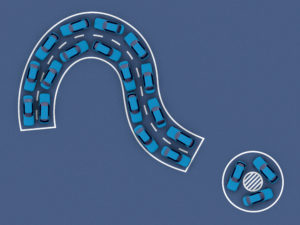 Auto insurers who fail to adjust pricing for the impact of advanced driver assistance systems can leave more than two-thirds of a book under- or over-paying for a policy, Swiss Re casualty underwriting Vice President Kim Nielsen said last week.

Nielsen’s presentation to Reuters Events’ free virtual Auto Insurance USA 2020 summit on July 29 suggests actuaries can’t ignore the technology on the vehicle itself. It also would suggest that claims personnel who refuse to reimburse the proper restoration of that technology could sabotaging their companies’ own underwriting.

Nielsen called ADAS pricing the next step in insurance pricing evolution after models calculating premiums based upon the driver (age, claims history) and then their actual on-road behavior (telematics, miles driven). The model wasn’t meant to supplant those traditional methods, according to Nielsen. Instead, an insurer would stack an ADAS risk model’s findings “on top” of the data from the traditional underwriting methods to develop the ultimate price, he said.

Automakers on their way to self-driving were outfitting vehicles with ADAS, and “it makes sense to shift the focus” in insurance from the human driver to the “car capability,” according to Nielsen. In a scenario where a human rode in the backseat of a self-driving car, “nobody” would care about the human’s driving ability, he pointed out.

According to Nielsen, three issues kept insurers from factoring ADAS into their premiums. Carriers needed to know broadly what technology existed on the vehicle, what generation of that technology had been installed and what was “done to it” when it was installed.

“Knowing this is paramount,” he said.

Only the OEMs knew these answers, and thus Swiss Re worked with automakers, according to Nielsen, specifically mentioning building a risk score model with BMW.

The second and “most important” variable involved the performance of the ADAS in traffic — not a track, where “everything is safe,” he said.

“That’s the risk they’re taking,” Nielsen said: Insurers are covering the car on real-world roads. It was important to understand what the ADAS meant for both frequency and severity, he said.

He presented an example of how two manufacturers could deliver different quality on the same ADAS concept. Videos showed what Nielsen called two “premium”-brand vehicles driving 20 mph at a dummy representing an adult pedestrian. One autobraking system stopped as intended — while the other let the vehicle plow into the pedestrian.

It was “paramount” to understand the difference, Nielsen said. Otherwise, “how do you actually price it accurately?”

The third factor involved how the driver used ADAS, though Nielsen argued this was becoming “less important” as the technology became a standard feature and drivers were unable to disable them.

Swiss Re has conducted research and built an ADAS risk score that an insurer can plug into their current pricing to refine it. Nielsen said it assessess both vehicle safety features and real-world performance.

Its sales pitch to insurers can include assessing how well both their model scoring ADAS and the customer carrier’s own underwriting predicted the claims which ultimately occurred, according to Nielsen. 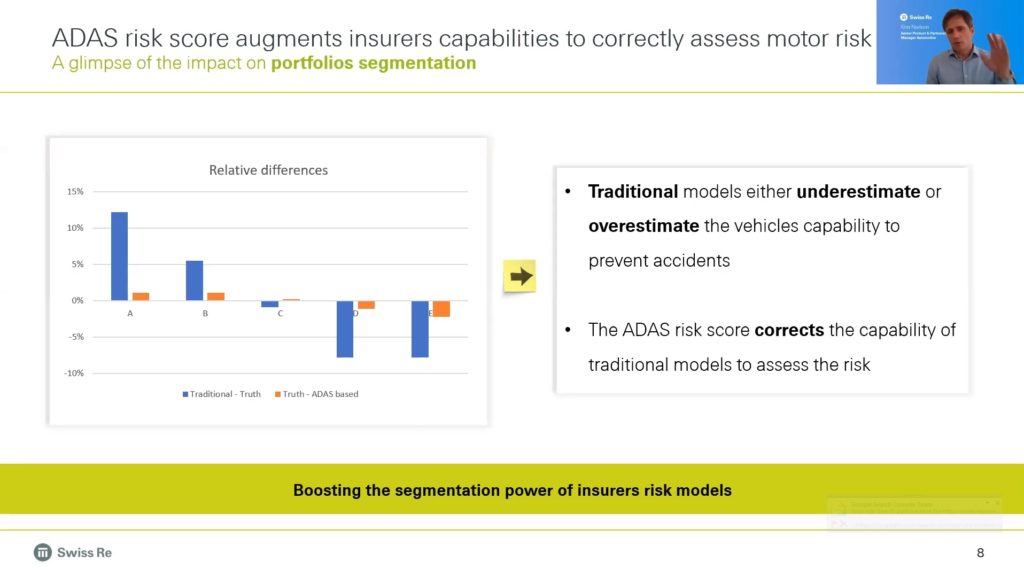 The insurers’ existing model, built “way before” ADAS existed, was “not actually that close” in every case, he said. It missed the real-world outcomes by more than 10 percent sometimes, he said.

Contrast those results, seen above in blue, with the orange bar graphs reflecting the Swiss Re ADAS risk predictions.

“It’s fairly close to the truth,” Nielsen said of the ADAS forecast.

He presented another graph showing what this meant for a book for policyholders. (It was unclear if this chart reflected the same European insurer or some other data set.

Another 10 percent would be off by a factor of “above 20 percent,” he said.

70 percent of the customer base were paying too much or too little for their insurance without actuaries compensating for the ADAS on their vehicle.

“THE SWISS RE ADAS RISK SCORE”

According to Swiss Re, insurer pricing which fails to account for ADAS can be off by double-digit percentages. (FrankRamspott/iStock)

Swiss Re showed the Auto Insurance USA 2020 event on July 29, 2020, how well a “major” European insurer’s pricing model that failed to account for ADAS predicted real-world claims (blue). Use of the Swiss Re ADAS risk model led to a more accurate prediction of what actually happened. (Swiss Re slide; screenshot from Reuters Events Auto Insurance USA 2020 virtual event)