The classifications provided by APU, Car-Part.com and PartsTrader also reveal the variability repairers might encounter when ordering ostensibly the same family of part using different platforms — in some cases, perhaps because a supplier is unsure which “bucket” best suites their wares.

Eric Marrello, APU director of sales, said Surplus OEM meant new, “in the box,” and sold by a dealer or affiliate with “that warranty.”

Recovered OEM (New Take Off): Been on the vehicle but taken off, new in quality. Wheels, doors, beds, etc. (Designators: ARA accepted damage and location codes)

About 5-10 years ago, customers had asked about differences in what was then a surplus OEM parts category, Marrello said. The parts procurement system decided to break the category into Surplus OEM and Recovered OEM, which drew a distinction between new parts still in the original packaging and parts pulled off of a new vehicle.

If a part wasn’t new in an OEM box, “that’s not a surplus part,” Marello said.

Marello said APU felt it was very important that Recovered OEM parts weren’t classified as surplus, for they weren’t the same type of part, he said. “They need to have a different segmentation,” he said.

David Willett of ProSight Specialty Insurance underwriting value creation offered another perspective on takeoff parts. He pointed out that some motorists will buy a new car and immediately replace “practically brand-new” tires with a competing tire manufacturer’s products out of brand loyalty. He said this is known as “dealer trade.”

Willett said he won’t insure automotive companies that sell used tires, but he would be comfortable insuring a business in dealer trade situations. 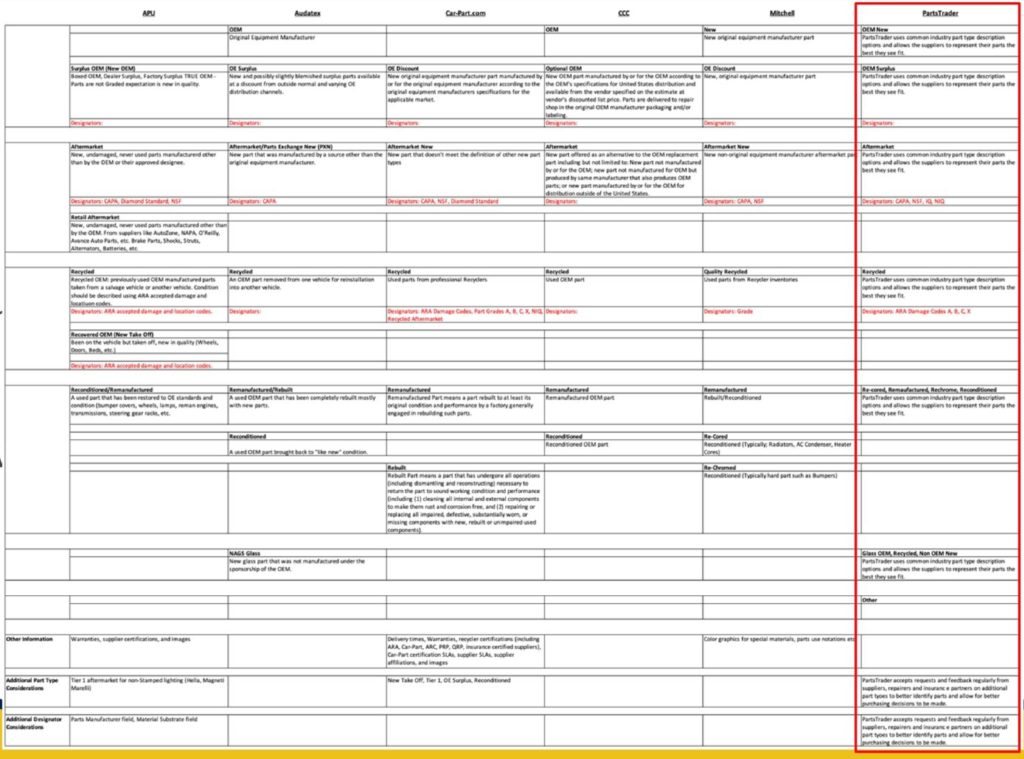 The definitions shared and Marello’s commentary also revealed differences between how APU and its sister Solera company Audatex classified parts.

According to a committee slide, Audatex defines both an OEM part and OE Surplus. But unlike APU’s mint-in-box Surplus OEM definition, definition Audatex will consider “New and possibly slightly blemished surplus parts available at a discount from outside normal and varying OE distribution channels” as OE Surplus.

Audatex also lacks a Recovered OE class of parts, but it segments refurbished parts more than APU does. Rather than a single definition for Reconditioned/Remanufactured parts like APU, Audatex defines Remanufactured/Rebuilt as “A used OEM part that has been completely rebuilt mostly with new parts,” but also recognizes Reconditioned parts: “A used OEM part brought back to ‘like new’ condition.” according to the slide.

Car-Part.com CEO Jeff Schroder said Recycled Aftermarket parts will be visible to the recycler network, as some people desire such parts. However, Car-Part.com doesn’t include them in its marketplace for professional repairers.

He also observed that a supplier using Car-Part.com could designate a part using the new takeoff concept described by APU, but Car-Part.com would output it as a recycled part.

Remanufactured: Remanufactured Part means a part rebuilt to at least its original condition and performance by a factory generally engaged in rebuilding such parts.

Rebuilt: Rebuilt Part means a part that has undergone all operations (including dismantling and reconstructing) necessary to return the part to sound working condition and performance (including (1) cleaning all internal and external components to make them rust and corrosion free, and (2) repairing or replacing all impaired, defective, substantially worn, or missing components with new, rebuilt or unimpared used components).

Car-Part.com follows the federal registry guidelines for remanufactured and rebuilt parts, according to Schroder. It draws the distinction that a remanufactured part is one handled by a “professional facility” designed for such a purpose.

Schroder said the company is integrated with Mitchell, and it uses the CIECA standard part codes to do so, he said.

Schroder noted that the old CIECA EMS format was mostly unidirectional, but the new CIECA BMS standard allows a two-way parts connection. Car-Part.com supports the latter, which means that for other estimating systems, the end user must copy and paste information back into the estimating system and designate individual part types, he said.

Parts and Materials Committee Co-Chairman Ken Weiss said he thought the company’s sentiment was that the marketplace would correct itself through feedback.

Though PartsTrader provided information on its part categories, it elected not to participate in the CIC panel.