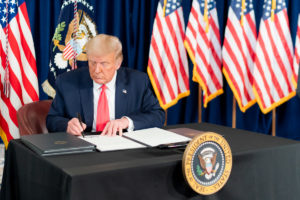 The memorandum issued Saturday would apply to the Social Security and Medicare taxes assessed on workers making less than $4,000 pre-tax bi-weekly. (Which works out to $104,000 annually.)

Trump wrote that “American workers have been particularly hard hit” by the COVID-19 coronavirus pandemic.

“While the Department of the Treasury has already undertaken historic efforts to alleviate the hardships of our citizens, it is clear that further temporary relief is necessary to support working Americans during these challenging times,” he wrote. “To that end, today I am directing the Secretary of the Treasury to use his authority to defer certain payroll tax obligations with respect to the American workers most in need.  This modest, targeted action will put money directly in the pockets of American workers and generate additional incentives for work and employment, right when the money is needed most.”

Or perhaps the employee won’t ever have to pay the tax at all. “The Secretary of the Treasury shall explore avenues, including legislation, to eliminate the obligation to pay the taxes deferred pursuant to the implementation of this memorandum,” Trump wrote.

That’s what’s on paper. How the new memo will work in practice is unclear.

American Institute of Certified Public Accountants taxation Vice President Edward Karl said Monday his team has begun compiling a list of potential questions — a list that had “grown exponentially today.” (Obviously, nothing in this article is intended as financial advice; consult your own qualified experts before taking any action.)

The executive memorandum commands Mnuchin to “issue guidance to implement this memorandum.” Based on our conversation with Karl, employers and employees might not get their answers until then.

“You could not implement this without guidance,” Karl said.

Karl said for now, employers should “pause,” focus instead on “the sustainability of the business” and let others focus on obtaining answers. Then, everyone can “regroup,” he said. 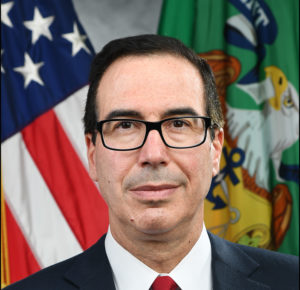 CPAs and payroll providers could be good resources for small business owners to lean on as the process evolves, according to Karl. (In fact, he said he had a call scheduled later Monday with some of the largest payroll companies.)

Senate Minority Leader Chuck Schumer, D-N.Y., on Aug. 10 also raised the possibility of businesses not wanting to defer the taxes.

“The president did not ‘cancel’ payroll taxes and this will actually hurt businesses, workers … because most employers will continue to withhold the payroll tax so they and their employees won’t be hit with a huge tax bill in December when it expires,” Schumer said in a statement.

Asked about the turnaround time for providing guidance when such tax changes arise, Karl said both the IRS and Treasury Department are “very good at assessing what guidance is needed,” though “it’s not always easy” to disseminate it all.

Karl described some potential formats for the guidance. Sometimes, Treasury and the IRS will release it in “very informal ways,” he said. It could take the form of FAQs. Sometimes, “they get out the clear stuff first” and continue to hash out more difficult elements.

Karl noted that “not a lot of time” existed to deliver the guidance before the Sept. 1 deferral start date mentioned in the memorandum. However, he also pointed out that an executive request offers more latitude than a statutory date.

Mnuchin expressed support for the payroll tax memo Saturday but didn’t discuss how he would implement it.

“I am pleased that President Trump has taken action to ensure that economic relief continues to be provided for America’s workers, families and businesses,” Mnuchin said regarding that document and other Saturday decrees. “These Executive Orders build upon our ongoing implementation of the CARES Act, which is delivering meaningful results for the American people.

“President Trump is fully committed to making sure that hardworking Americans and businesses continue to have the resources they need as our country safely reopens.”