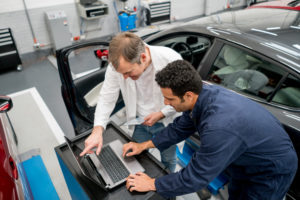 Insurers are requesting shops prepare photo estimates — but refusing to pay for it in many cases, a new “Who Pays for What?” poll question found.

Nevertheless, the study found 27 percent of shops charging for such work seeing eight of the nation’s largest insurers covering the bill “always” or “most of the time.”

The Collision Advice-CRASH Network poll, which ran from July 1 through early August, defined the operation as “Preparing a photo-based estimate at the insurer’s request.” It was the first time the quarterly study had asked about that work.

Collision Advice CEO Mike Anderson elaborated in an email Thursday: “That question is in regards to if a shop receives an assignment and they are asked by the insurer to write the original estimate and take photos.”

About half of the more than 300 shops responding for each of the insurers never asked to be reimbursed. 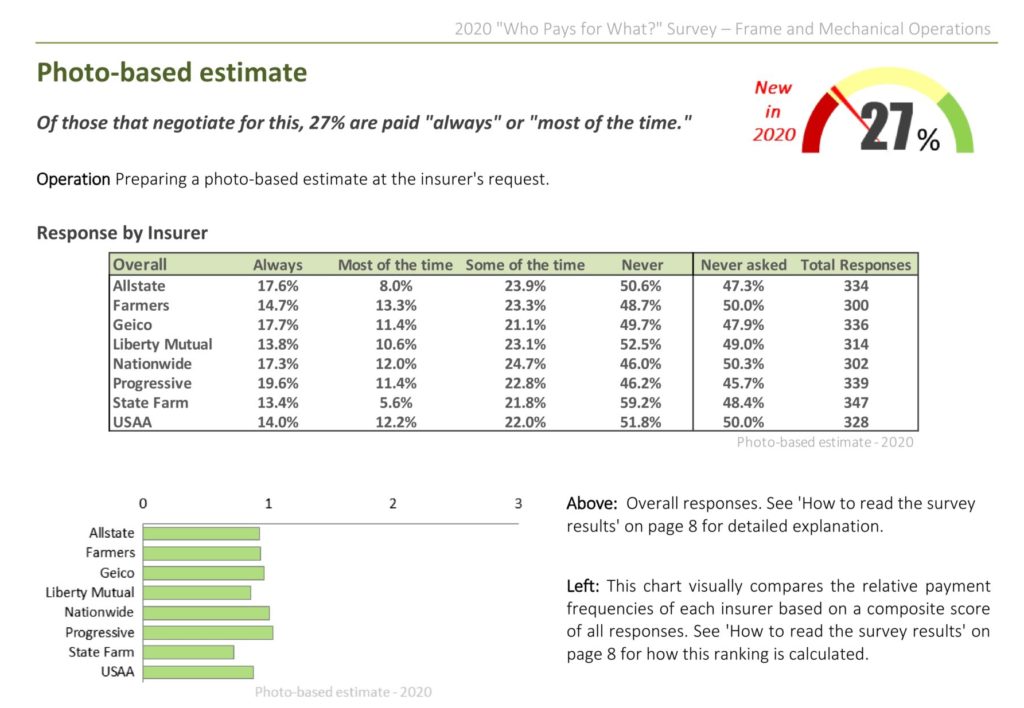 Out of the 150 or more shops who did attempt to charge the individual insurers for the work, around half reported the labor  “never” being reimbursed. Which is ironic, because the insurer’s the one who asked for it in the first place.

“As we see more insurance companies request that shops submit photo-based estimates because of COVID-19, it will be interesting to watch the statistics for this procedure in future surveys,” Anderson wrote in the study.

It’s interesting to note that some shops in each of the eight insurer direct repair program networks were paid “always” when they billed for such estimates. Non-DRP shops were even more consistently reimbursed when they pursued the same charges. 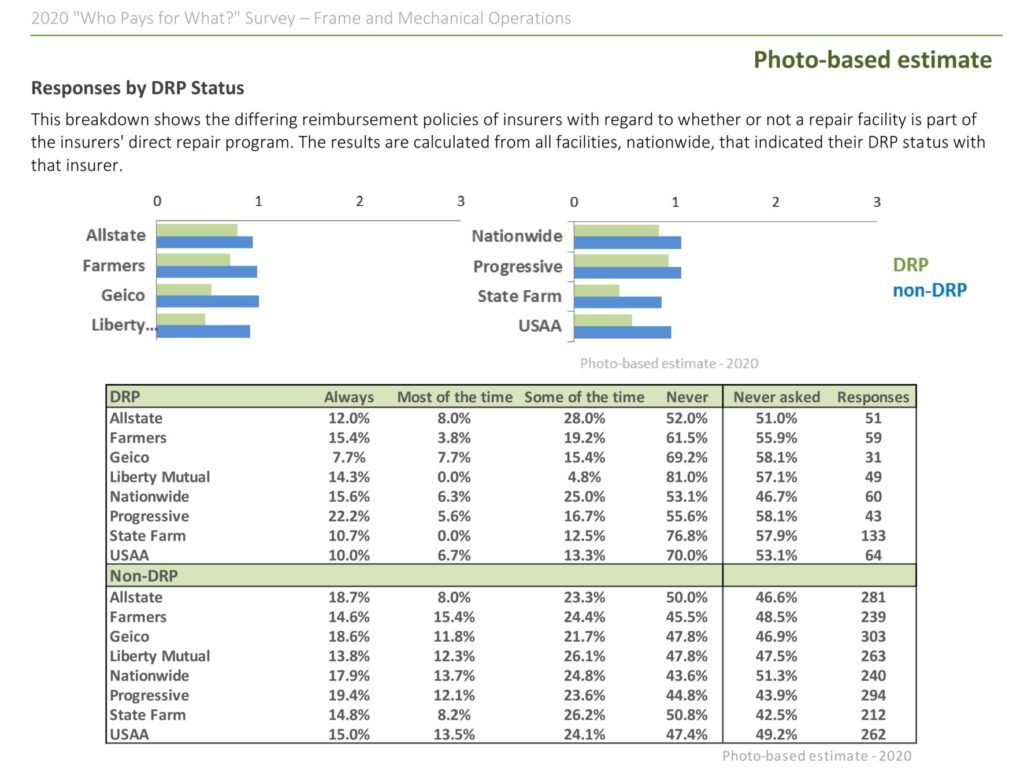 The latest CCC “Crash Course” found around 40 percent of estimates written on behalf of carriers by direct repair program shops between 2013 and 2019. The share of estimates done for insurers by non-DRP shops through the CCC “Open Shop” program grew throughout those years, though it appears to have dropped slightly between 2018 and 2019. 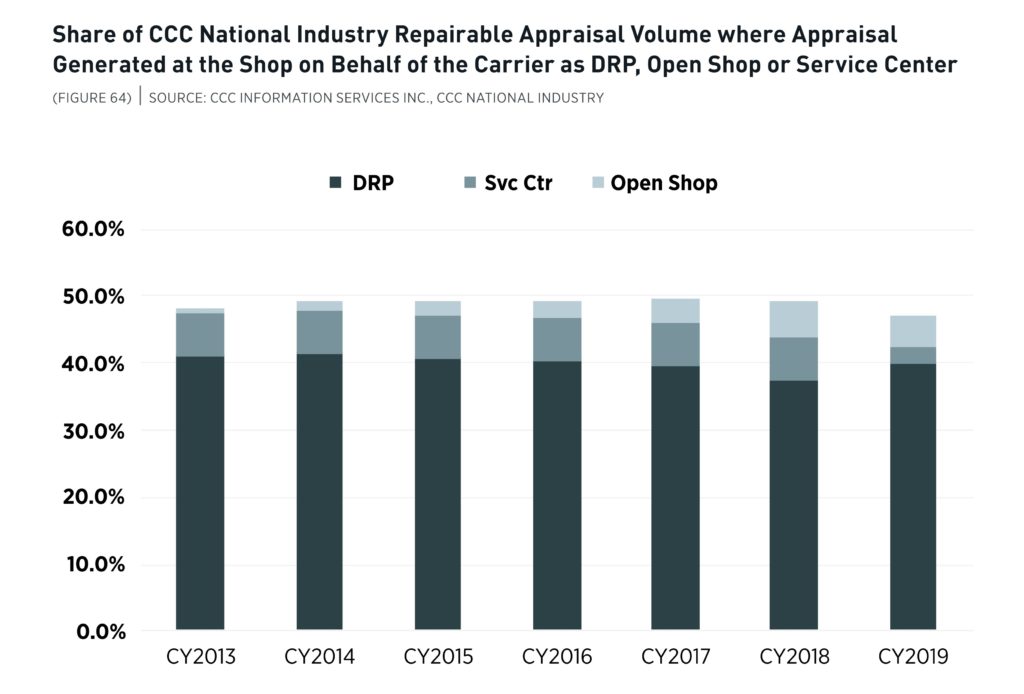 The Alliance of Automotive Service Providers of New Jersey addressed other work done on behalf of an insurer during a virtual town hall this summer.

New Jersey requires insurers who want to inspect a vehicle to do so in seven working days.

AASP-NJ Executive Director Charles Bryant in August said he’d been told a lot of insurers were telling body shops to take photos of aspects of the vehicle, such as the VIN, the damage, or the four corners. Or perhaps carriers were asking shops to download an app and take a video.

He said he knew many shops were encountering such requests, and many were wondering why they should do so without payment.

AASP-NJ has created a form for the shops who did wish to charge for the work. It explains that the shop would perform such services on behalf of the insurer, but it would bill for them, according to Bryant. Otherwise, the insurer could either “waive the inspection” or follow the regulation and come out to inspect within seven working days, he said.

Help the collision industry by taking the current “Who Pays for What?” survey by the end of the month and answering questions on topics like shop supplies and advanced driver assistance system calibration. All answers are kept confidential; data is published only in the aggregate.

Some auto body shops write estimates at the request of an insurer. (andresr/iStock)

A summer 2020 “Who Pays for What?” poll found insurers consistently agreeing to reimburse some shops who charged for preparing certain estimates at the carrier’s request. (Provided by CRASH Network and Collision Advice)

The 2020 CCC “Crash Course” found around 40 percent of estimates written on behalf of carriers by direct repair program shops between 2013 and 2019. The share of estimates done for insurers by non-DRP shops through the CCC “Open Shop” program grew throughout those years, though it appears to have dropped slightly between 2018 and 2019. (Provided by CCC)