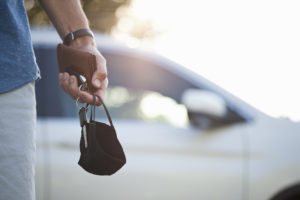 The various statistics offer auto body shops mechanisms for evaluating their businesses and gauging the impact of future pandemic initiatives upon claims.

For example, states like Washington and Michigan this week tightened restrictions in response to significant COVID-19 resurgences — potentially curtailing road traffic and collisions even further. CCC reported that Washington’s repairable claims were already down 23 percent in October, and Michigan’s stood down 16 percent.

“With the U.S. reporting more than 100,000 new COVID-19 cases in a single day, predictions of a winter wave of the virus appear to be coming true; plans to bring more students back to school full-time or employees back to office will likely be stalled further,” CCC wrote Wednesday. “Additionally, U.S. unemployment claims have not improved significantly in the last several weeks. With many fewer drivers on the road each day driving to work, driving kids to school, or because they are unemployed, the likelihood of significant increases in accident and claims counts in Q4 are looking even more unlikely.”

Without catastrophic claims, body shops would have experienced even lower volume this year, according to CCC. (Weather-battered Louisiana might have provided a symbol of this, with repairable appraisals up 8 percent in an October which saw Hurricanes Delta and Zeta.) Nationally, repairable non-comprehensive claims in the first 10 months of the year are down more than 25 percent, CCC wrote. 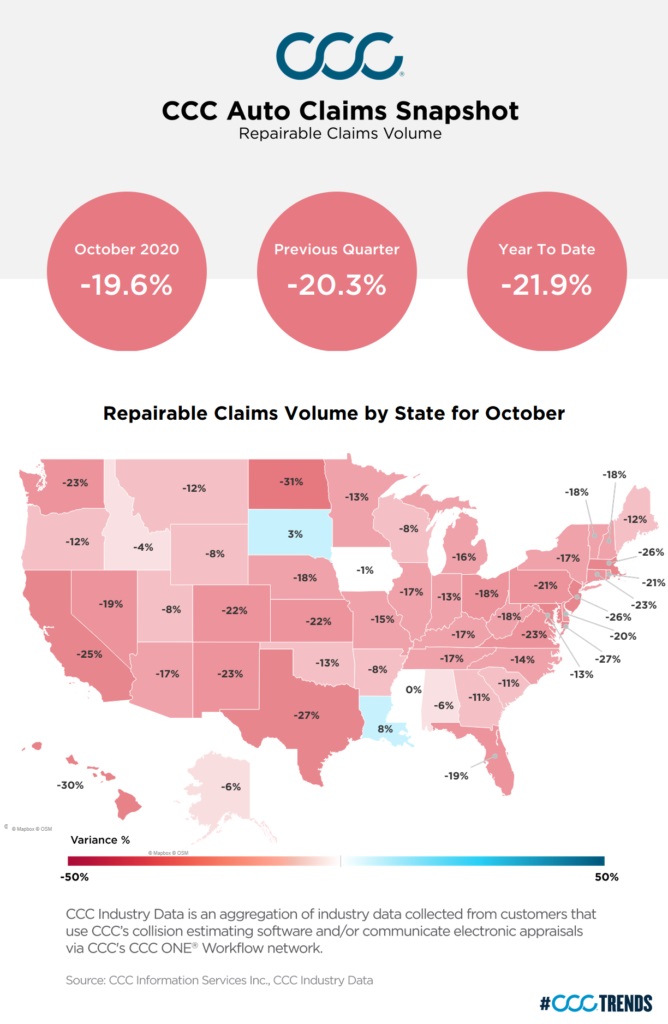 Total losses also remain elevated compared to 2019 — another contributor to the decline in repairable vehicles. CCC said totals reached 21 percent of losses in the third quarter compared to 18.7 percent in 2019.

“Higher total loss frequency with a higher share of claims that are non-driveable continue to underscore how COVID-19 has changed accident types,” CCC wrote.

Kohl and State Farm property and casualty claim consultant Chris Evans told the MSO Symposium audience that auto frequency remained down but nowhere near as much as the heart of the pandemic in the spring.

Evans said his company’s losses at in late March and early April were “literally cut in half.”

He estimated that when considering a rolling 12-month period, State Farm was today experiencing a percentage decline in the “kind of negative teens, if you will.”

Kohl estimated that his insurer’s claims “certainly took a hit” at the end of the first quarter and beginning of 2Q but had rebounded — but not to 2019 levels. He said Liberty Mutual was likely in the “low teens” in terms of a claims decline.

Progressive on Nov. 3 said its personal auto incurred frequency fell 19 percent in the third quarter and was down 25 percent for the first nine months of the year.

“Auto property damage decreased about 24% for the third quarter and 28% for the first nine months of 2020, respectively,” Progressive wrote.

“… Collision decreased about 15% for the quarter and 25% for the first nine months.”

GEICO parent Berkshire Hathaway didn’t report third-quarter frequencies and severity in its Nov. 7 10-Q, instead examining the first nine months of the year.

Insurers estimated auto claim frequency was down in the third quarter of 2020, and CCC wrote that repairable vehicle appraisals were down 19.6 percent in October. (Liliboas/iStock)