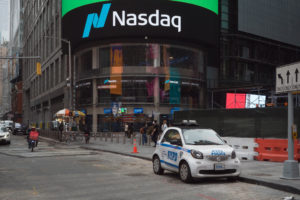 Driven Brands, the private equity-funded conglomerate behind CARSTAR, Maaco, Fix Auto USA and ABRA, last week filed for an initial public offering it indicated would bring in hundreds of millions of dollars.

The company plans to sell an undisclosed amount of stock to the public on the NASDAQ exchange using the symbol “DRVN.” The Dec. 22 prospectus filed with the SEC did not specify a share price or how many shares it planned to issue.

However, it’s possible to get at least a partial sense of what the company expects to make off the deal.

Other stock proceeds were earmarked to pay off the costs of the IPO (fees, etc.). Anything left after that would go to “general corporate purposes,” Driven Brands told investors.

The IPO could bring in even more money if underwriters execute an option to buy some of Driven Brands’ stock too. The company said it would use any revenue from that sale to buy stock from certain current shareholders and use anything left for “general corporate purposes.”

These plans exemplify what Veritas Advisors President John Walcher, a collision industry financial consultant, called some of the advantages for any company choosing to go public:

1. The main reason companies choose to go public is to access cash, which can be used to pay down debt, improve their balance sheets/creditworthiness, acquire other companies, fund growth initiatives, etc.

2. After the applicable lockup period(s), there can be liquidity for all shareholders.  Shareholders of private companies, particularly the minority shareholders, have little to no way to monetize their ownership at fair value.  Similarly, employees of public companies may find it much easier to sell their vested stock options, which results in being able to attract better talent. (Minor formatting edits.)

Existing shareholders will retain a majority stake in the company following the sale.

This majority position might help avoid what Walcher said Tuesday can be a disadvantage for any business that goes public: “In many respects, private companies have more flexibility because they don’t have to disclose material events and they get to choose who their investors are; thus, there are no concerns regarding activist shareholders, poison pills, etc.”

Driven Brands does not plan to pay a dividend at first, though it will consider doing so in the future.

“The incredible success of AIRBNB, DoorDash, Palantir and a host of other IPOs in the past year are demonstrating that investors have an enormous appetite for new public companies,” David Roberts, managing director of collision industry financial consulting firm Focus Advisors, wrote in an email Monday. “Private equity firms are deriving huge paydays from bringing their successful portfolio companies back to the public markets after bulking up with acquisitions, adding debt and increasing penetration of their vertical markets. …

“Selling out to another PE firm is what Carousel did when they sold Driven Brands to Harvest Partners who then sold Driven to Roark 5 years ago.  Now the whole entity has sufficient size and profitability that it can raise new capital at lower costs by going public.  And it allows Roark to gain liquidity on a very successful investment.”

Walcher said an IPO “tends to bolster a company’s reputation and credibility, which can result in opportunities that might not otherwise come their way.”

Driven Brands said it did about $3 billion worth of sales companywide in 2019, leading to about $600 million in revenue for the franchisor. Franchisee royalties and fees constituted 19 percent of the company’s revenue, and another another 56 percent of revenue stemmed from company-operated stores, according to the prospectus.

The Paint, Collision and Glass segment containing CARSTAR, Maaco and ABRA represented about 24 percent of the company’s 2019 revenue, despite contributing what Kroll Bond Ratings this month estimated was 63 percent of sales.

The conglomerate estimated that had it bought the 900-location, 14-country International Car Wash Group in 2019 instead of 2020, it would have washed, fixed, maintained, painted and otherwise handled 50 million vehicles in 2019. About 50 percent of its sales would have been retail, and “approximately 50% coming from commercial customers such as fleet operators and insurance carriers.”

Though Driven Brands will theoretically clear its books of $725 million in debt, it will continue to owe more than a billion, according to the prospectus.

“We have a significant amount of indebtedness. Following this offering and the use of proceeds described here, we will have six series of term notes, $1,442 million of which were outstanding as of September 26, 2020, and one series of variable funding notes, which had no outstanding balance as of September 26, 2020, pursuant to the Securitization Senior Notes Indenture,” it told investors in the prospectus.

Driven Brands most recently borrowed $450 million at 3.237 percent and is expected to pay it back in January 2028, based on the Dec. 14 Kroll securitization analysis. (Technically, the debt matures in January 2051, Kroll said.)

Walcher said an IPO can make it easier for any company to borrow money in the future.

“… At some point, a privately-held company may have limited options for raising additional capital or providing its shareholders liquidity; an IPO can be the pinnacle of achievement for some CEOs and the only viable path for others.”

“While we have no inside information about Driven Brands, they have demonstrated their capabilities to continue growing both by recent acquisitions of FIXUSA, ABRA and International Car Wash operations as well as by increasing the number of franchisees and the revenue by location across most of their platform companies,” he wrote in an email.

“They have plenty of growth cash now thanks to their recent debt financing and they are increasingly cross selling among their platforms.  The opportunities to combine data about vehicles and owners that patronize their aftermarket providers adds another dimension to their growth as well.

“So we expect investors will see growth in three dimensions – acquisitions, same store increases in absolute locations and income as well as additional revenue leverage from cross selling and data.”

“Driven Brands has a long track record of delivering strong growth through consistent same store sales performance, store count growth, and acquisitions,” the company wrote in its prospectus. “All of our brands produce highly-compelling unit-level economics and cash-on-cash returns, which results in recurring and growing income for Driven Brands and for our healthy and growing network of franchisees, and we have agreements to open more than 500 new franchised units as of September 26, 2020. Our organic growth is complemented by a consistent and repeatable M&A strategy, having completed more than 40 acquisitions since 2015. Notably, in August 2020 we acquired ICWG, the world’s largest car wash company by location count with more than 900 locations across 14 countries, demonstrating our continued ability to pursue and execute upon scalable and highly strategic M&A. Within our existing service categories, we believe we have enormous whitespace, with over 12,000 potential locations across North America alone. We are only in first gear.”

The IPO could help Driven Brands cut deals in any of its verticals.  Walcher wrote in an email Tuesday that public businesses “have an easier time using their stock as currency for M&A deals because the sellers who accept their stock typically can monetize the shares earlier/more easily than if the buyer is privately held.”

The company also has rebounded significantly from the effects of COVID-19, according to Kroll.

“However, over the past several months nearly all of the system’s locations have reportedly remained open and are considered essential businesses in most states as well as in Canada,” Kroll wrote Dec. 14. “Furthermore, while the Driven Brands system experienced sales declines in the first several months related to COVID-19, sales trends have improved significantly since and same-store sales (SSS) performance was -2% as of Q3 2020 compared to same period in 2019.”

And as Roberts noted, the company has a big data business advantage. Driven Brands’ prospectus observed how the company is already collecting “more than 40 million data elements collected each month” and has a “repository with approximately 18 billion unique elements.”

“As we grow organically and through acquisition, we believe the power of our shared services and data analytics will grow and will continue to be a key differentiator for our business through strengthening economies of scale, enhanced and accelerated data collection, and continued roll-out of best practices, ultimately driving attractive growth and profitability in our overall business,” Driven Brands wrote in the prospectus.