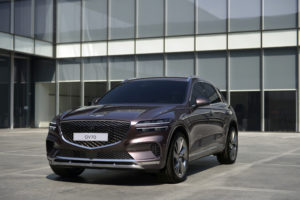 Genesis last month said its brand-new GV70 SUV coming to the U.S. this year would employ both steel and aluminum in the vehicle body.

According to Genesis, the “enhanced body frame structure” on the SUV saw the OEM “increasing the ultrahigh tensile steel plates and expanding hot stamping steel plates.” This improves the driving experience, Genesis said.

“GV70’s performance is enhanced by reducing weight with lightweight technologies such as application of aluminum materials to the hood and tailgate,” Genesis wrote in a Dec. 1, 2020, news release.

The GV70 is the second SUV for the Hyundai luxury brand. Genesis recently began selling the completely new GV80, which it described as its “flagship SUV.”

“Genesis continues to build on our solid foundation with the addition of new and exciting products to our lineup,” Genesis North America CEO Mark Del Rosso said in a statement Oct. 28, 2020. “We recently launched our first-ever SUV, the flagship GV80, with U.S. deliveries beginning in the next thirty days. Now, with the upcoming release of the dynamic GV70 and a further diversified product portfolio, Genesis will be able to reach an even broader audience of American consumers.”

The GV80 contains aluminum doors as well as an aluminum hood and tailgate; it’s unclear from Genesis’ latest news release if the GV70 would extend its closure lightweighting to that degree.

Genesis shared a few other details about the GV70 body last month and/or in a separate news release Oct. 28, 2020. 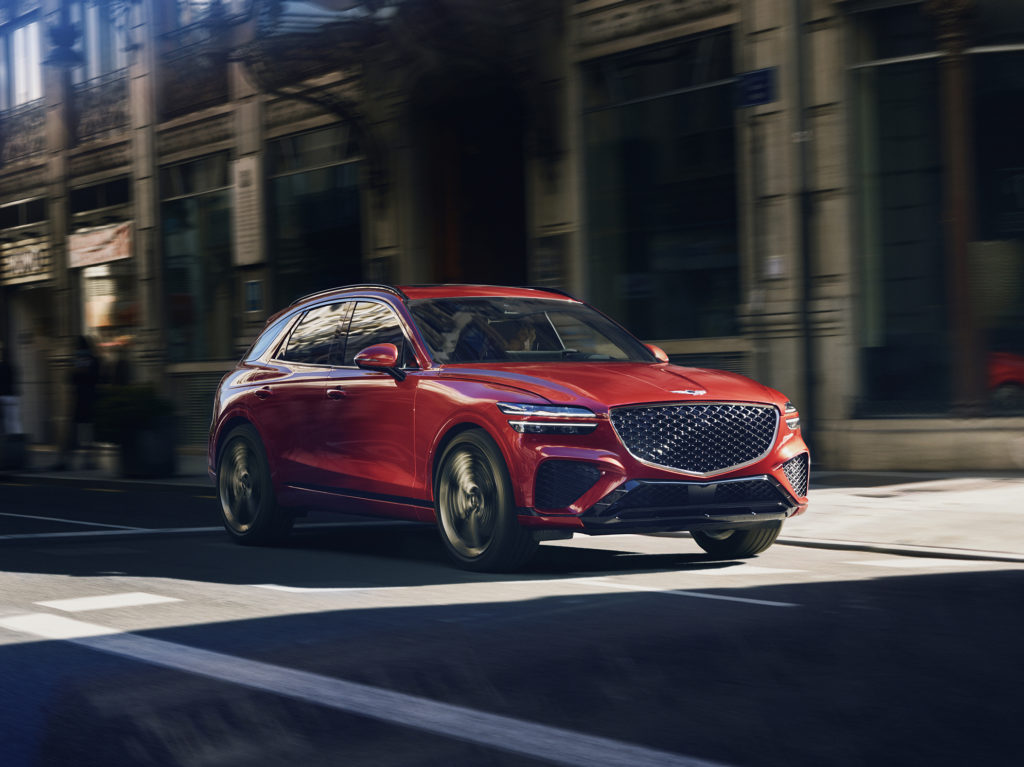 The skid plate under the front bumper “has been extended to the flank, reinforcing the image of a sporty SUV,” and the OEM noted that “all functional elements” in the back of the SUV can be found within the rear bumper.

“The rear also features a number of subtle design details – including a G-Matrix pattern-applied bumper, a unique vertical shaped muffler, and a body-colored diffuser – that accentuate the GV70’s dynamic look,” Genesis wrote. It said the GV70 Sport package option will provide “an exclusively designed front bumper,” among other changes. 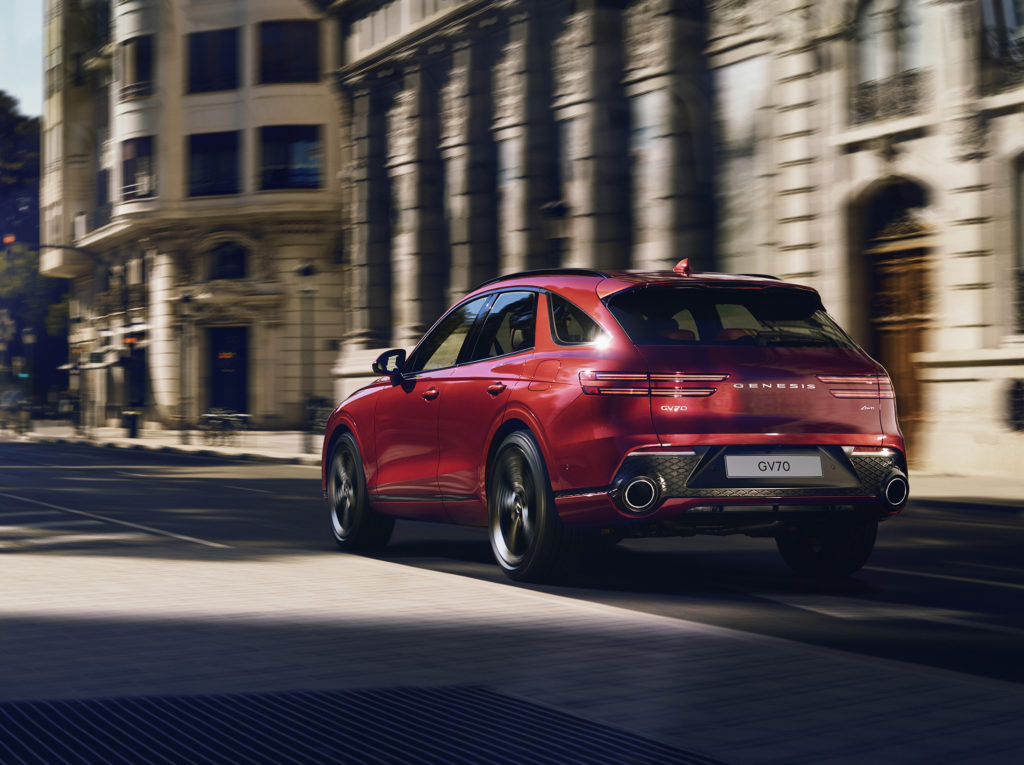 Shops will also notice the Genesis “Quad Lamps” flourish: The headlights and taillights on each side of the vehicle are bisected horizontally.

The side of the SUV contains what Genesis calls the “Parabolic Line.” The body line runs from the top of the Quad Lamps between the fender and hood all the way back to the quarter panel near the taillightand cuts across the fuel door. 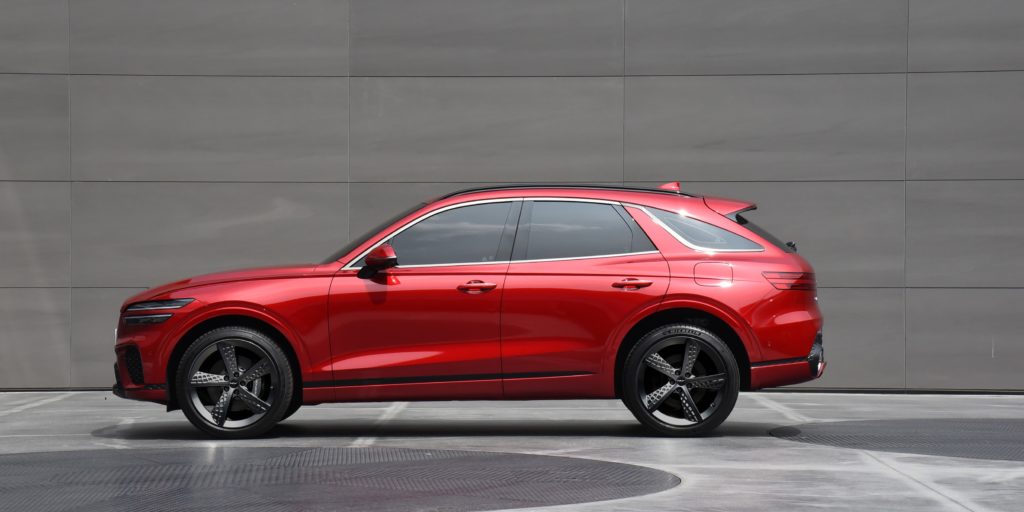 From a technology standpoint, Genesis said in December the GV70 would represent the OEM’s debut of fingerprint authentication security and an Advanced Rear Occupant Alert system “much more sophisticated than traditional ultrasonic sensors.”

These sensors might be a factor when repairers work in the vehicle interior, depending on their properties and locations.

“The system uses sensors mounted inside the vehicle to detect passengers in the rear seat and alerts the driver of their presence in multiple phases,” Genesis continued. “Not only are GV70’s radar sensors capable of sensing when passengers in the rear move their limbs, but they can also detect small respiratory movements near the passenger’s chest, enabling GV70 to alert drivers in cases when a child or sleeping infant has been left in their seat.”

These new sensors could join a forward-looking camera shops might see in the vehicle interior. The camera is part of the driver attention monitoring safety feature, an existing tech system Genesis will offer again on the GV70.

Not surprisingly for a luxury brand in the year 2021, the GV70 will have multiple ADAS systems available.

These include “Highway Driving Assist II,” which can permit the SUV to change lanes itself if you hit a turn signal. The technology is also “actively responding to close-range low-speed cut-ins,” Genesis wrote.

Featured images: The Genesis G70, a completely new SUV from the Hyundai luxury brand, will reach the U.S. in 2021. (Provided by Genesis)