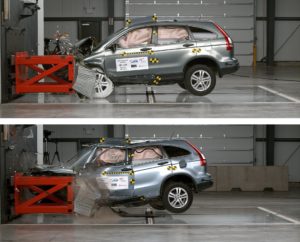 In a reminder to OEMs and body shops of the potential stakes of a crash, the Insurance Institute for Highway Safety on Thursday demonstrated what increases of just 10 mph and 16 mph of speed could mean during a collision.

The organization used the results from its joint research with the AAA Foundation for Traffic Safety and Humanetics to discuss speed limit policy.

“Speed limits should not be raised or lowered only to manipulate traffic volume on a particular roadway,” the IIHS wrote. “States are urged to use engineering and traffic surveys when setting maximum speed limits.”

The study picked the 2010 model year because of the average age of a vehicle. (The IIHS cited the 2019 age of 11.8 years; IHS Markit said the average 2020 vehicle is even older, 11.9 years.) The choice of a CR-V specfically stemmed from the vehicle’s top marks on the 40 mph moderate-overlap crash test.

“They found the slightly higher speeds were enough to increase the driver’s risk of severe injury or death,” the IIHS wrote Thursday.

“… As the crash speed increased in the tests, researchers found more structural damage and greater forces on the dummy’s entire body.”

Crashing into the barrier at the normal 40 mph left “minimal intrusion” into the driver’s area of the test vehicle, the IIHS wrote. Which makes sense — the crossover has been proven to ace that test. 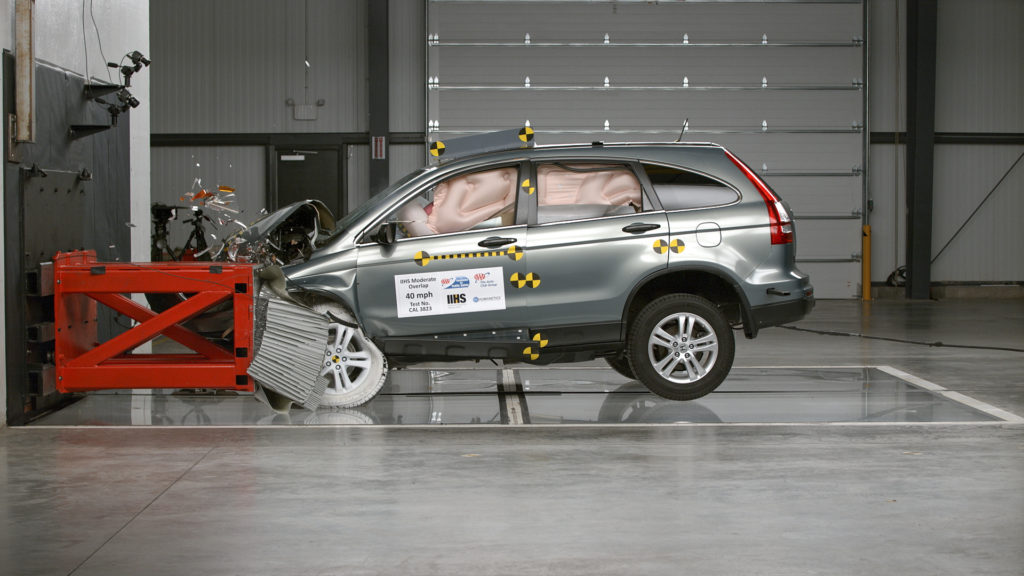 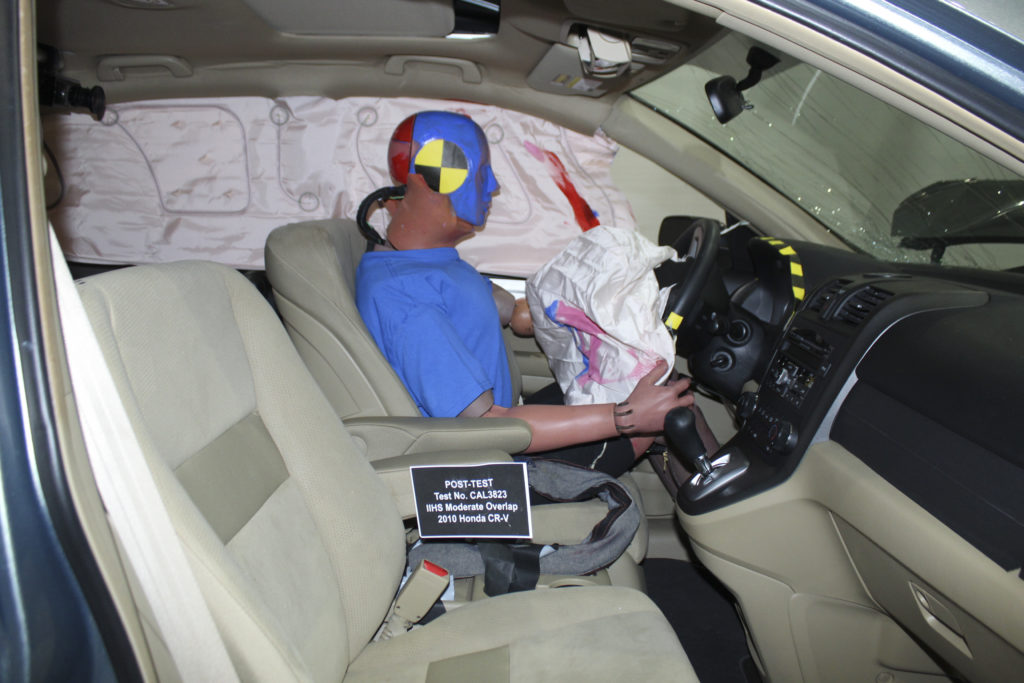 But when the speed was increased to 50 mph, “there was noticeable deformation of the driver side door opening, dashboard and foot area,” the IIHS wrote.

The IIHS said the dummy indicated that a real human would have “a high risk of facial fractures and severe brain injury.” 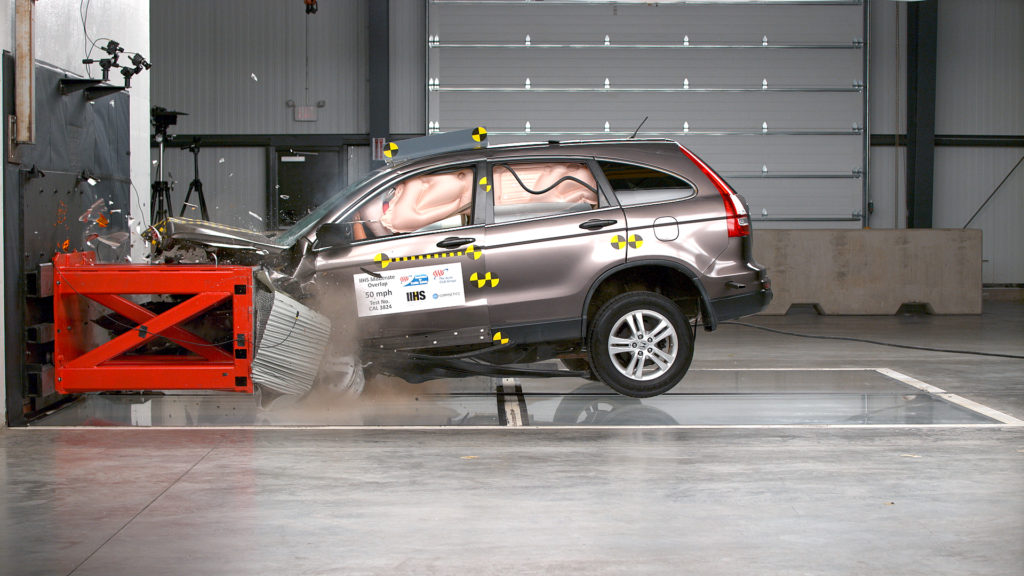 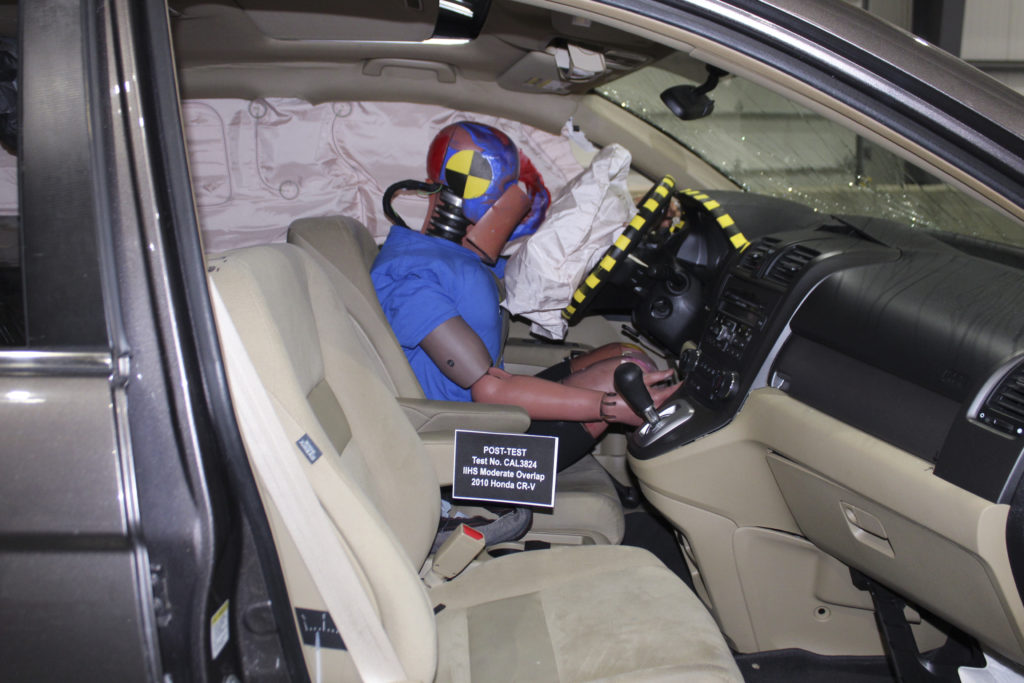 At 56 mph, a human driver would have suffered “severe neck injuries” and possibly broken at least one long bone in the lower leg, for “the vehicle interior was significantly compromised.” That person also would have experienced a similar impact to the steering wheel and risk of facial and brain injuries as were observed in the 50 mph crash. 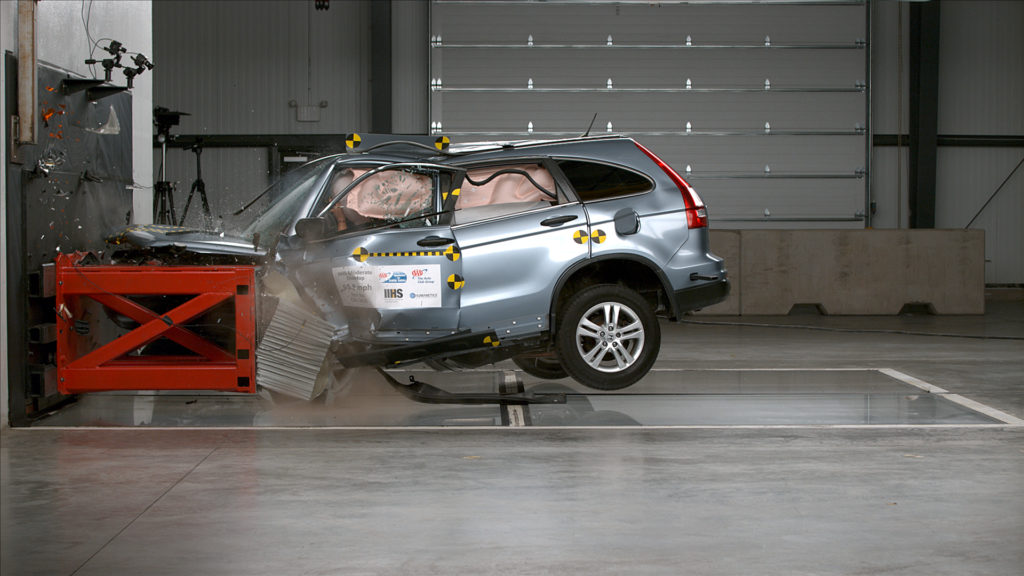 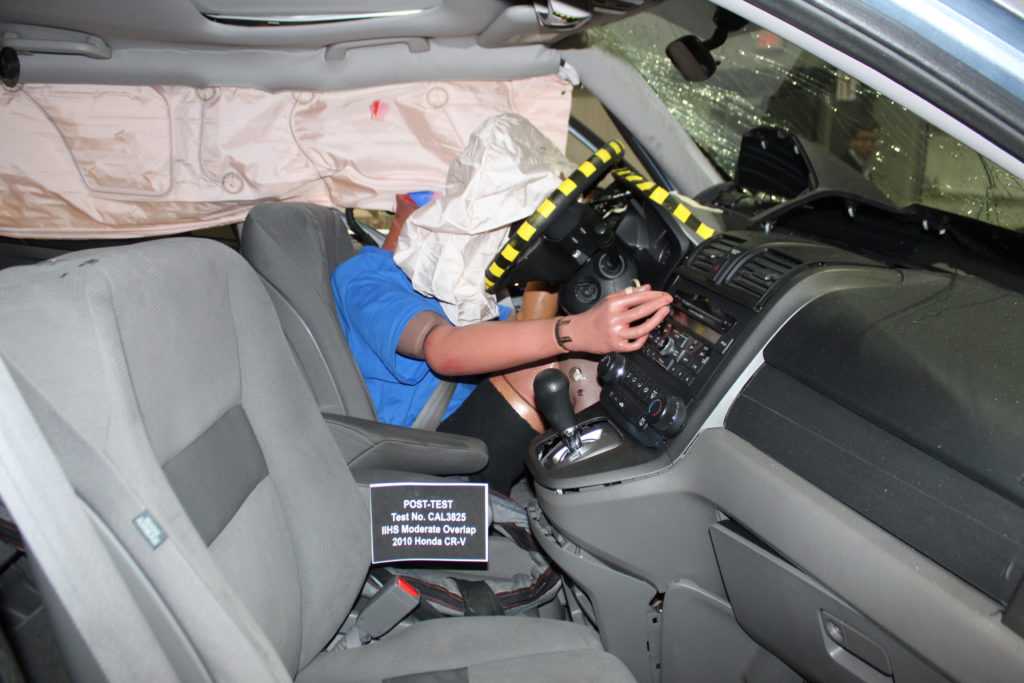 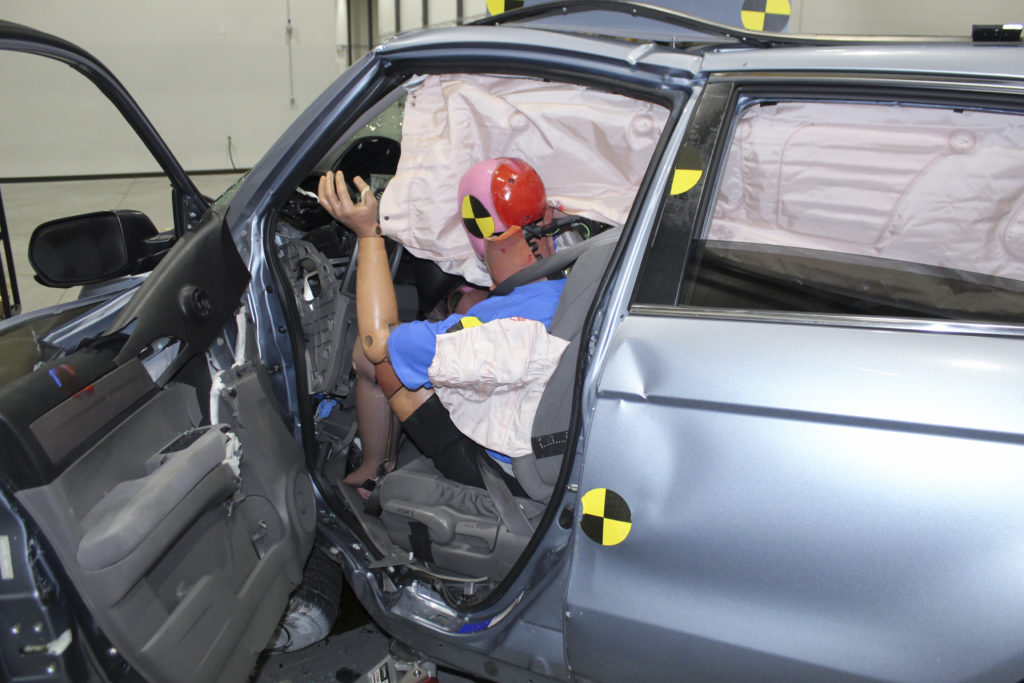 Higher speed limits cancel out the benefits of vehicle safety improvements like airbags and improved structural designs, IIHS President David Harkey said in a statement. The faster a driver is going before a crash, the less likely it is that they’ll be able to get down to a survivable speed even if they have a chance to brake before impact.

That said, Honda has changed the CR-V over the past 11 years. The crossover’s structure alone has experienced two full design generations and at least one major refresh since the 2010 model year. (Which is also a lesson to shops and insurers on how much vehicle structures might change over a relatively short amount of time.)

The OEM said the 2012 CR-V had a “Lighter (-20 lbs approximately) and stronger body with a dynamic rigidity balance that matches the previous generation model, as well as increased static rigidity (bending rigidity +7 percent and torsional rigidity +9 percent).” The 2015 body underwent a mid-cycle refresh Honda said made “over 60 changes to improve stiffness and collision performance.”

We mentioned the potential for such upgrades and asked what the IIHS thought would happen with current-year CR-Vs put through such testing.

“That’s a good question, and unfortunately one I can only speculate on,” IIHS media relations director Joe Young wrote in an email. “You are correct that the 2010 CR-V isn’t in quite the same league as a 2021 CR-V, which earns good ratings in more crash tests and comes standard with a front crash prevention system that might help scrub off speed before an imminent collision. But it’s worth pointing out that going from a 40-mph crash to a 56-mph, which may not feel like a huge jump, involves nearly twice as much (~96% more) crash energy, which would certainly degrade the performance of a newer vehicle, even if it’s not as bad as the 2010.

“I think the main takeaway for drivers is simply to remember that any crash is going to be worse at a higher speed, and depending on the vehicle they drive, the difference between walking away and serious injuries may not be as big a speed difference as people think.”

Cars are safer than they’ve ever been, but nobody’s figured out how to make them defy the laws of physics, Harkey said in a statement. Rather than raising speed limits, states should vigorously enforce the limits they have. This includes using proven countermeasures like high-visibility enforcement and carefully implemented speed-camera programs to consistently and equitably enforce speed limits 24/7.

The research makes one wonder how errors in repair procedures could compound the severity of a crash as speed increases. For example, would a part that gives way and injures a passenger at 56 mph do so at 50 mph if a shop failed to follow structural OEM repair procedures?

Honda’s own crash testing experiment involving a 2014 Acura MDX demonstrated how an incorrect repair could hinder a vehicle’s performance in a different 40 mph crash.

The automaker reproduced improper real-world repairs to the passenger-side 1,500-megapascal door ring of the crossover and ran that MDX and a factory model through the IIHS’ driver’s side small-overlap crash test. (For the purposes of testing on an apples-to-apples basis, Honda applied the bad repairs to the driver’s half of the test MDX.)

The shop had used MAG plug welding on the 1,500 MPa ring instead of the squeeze-type-resistant spot welding demanded by Honda on the factory seams. The repairer also butt-welded the A-pillar of the ring, which was incorrect.

Following the 40 mph crash testing, the differences between the two MDXs was obvious. The driver’s door doesn’t open on the botched MDX, there’s more damage to its body, and the welds on the sill area split at the point where the door ring was sectioned.

Harkey and Young’s comments about reducing speed also raise another good reminder for shops: Make sure your customer’s ADAS works properly. Its ability to react and cut velocity if a human doesn’t hit the brakes could be a critical factor in getting the speed down to a level where the vehicle can better protect the occupant. Even if the ADAS can’t bring the vehicle to a complete stop, the IIHS testing seems to show that every little bit of speed that can be cut helps.

Results of a 40 mph (top) and 56 mph moderate-overlap crash of a 2010 Honda CR-V EX. (Provided by Insurance Institute for Highway Safety)

Results of a 40 mph moderate-overlap crash of a 2010 Honda CR-V EX. (Provided by Insurance Institute for Highway Safety)

Results of a 50 mph moderate-overlap crash of a 2010 Honda CR-V EX. (Provided by Insurance Institute for Highway Safety)

Results of a 56 mph moderate-overlap crash of a 2010 Honda CR-V EX. (Provided by Insurance Institute for Highway Safety)