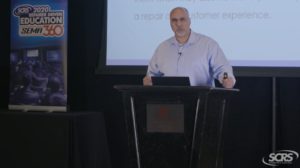 A quality control checklist at the end of an auto body repair is like a team waiting to examine their gameplay after they’ve lost, a consultant recently warned the industry.

It “does nothing to improve the performance in the game,” Sherwin-Williams manager of business consulting services Lee Rush said. “It’s done. It’s over. It is what it is.”

A shop can catch errors and fix them before handing the vehicle to a customer, but their overall process won’t improve that way, he said.

Rush’s comments came during “Why Ignoring QUALITY CONTROL Will Cost You Profits and Sales” one of more than a dozen video courses in the Society of Collision Repair Specialists’ virtual Repairer Driven Education series. Released in November 2020, these virtual classes will remain online and replayable though Aug. 31, 2021.

“QC” occurred at the end of the repair cycle, Rush said. “We inspect quality to control it from reaching the consumer,” he said.

In-process quality control and assurance was a separate process, according to Rush. It was like a team that adjusted their play during the game — before they lose.

Rush demonstrated in the class how a failure to track and eliminate quality issues which arise typically during repairs could cost a business thousands of dollars in “sales per labor hour sold.” Any time spent redoing repairs reduces the amount of time available for revenue-generating work, according to Rush.

He said many OEM certification programs would move in this direction, arguing that automakers would cease to tolerate pencil-and-paper checklist systems. 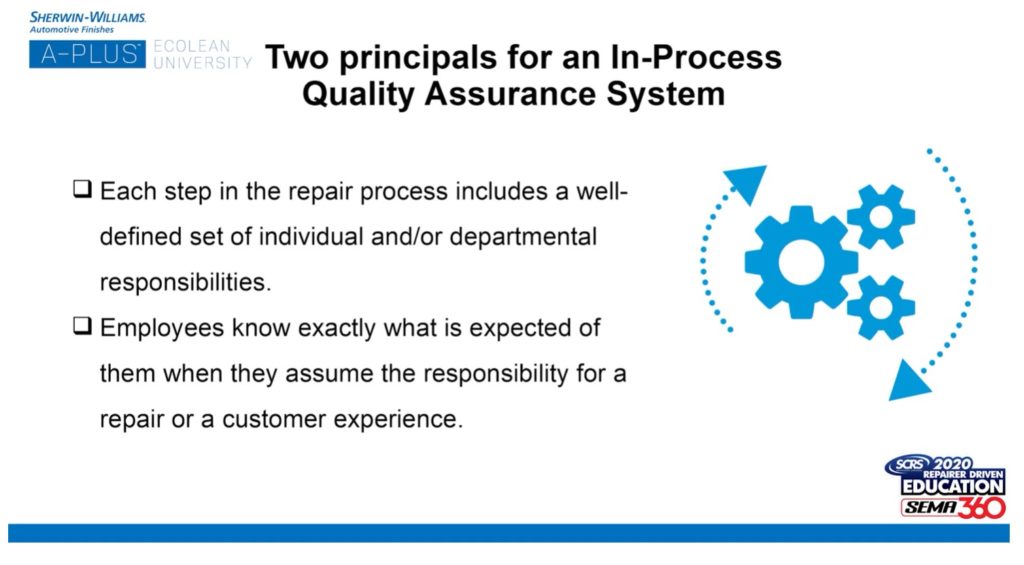 First, each step of the repair has defined personal or departmental responsibilities.

“That’s true whether you have an in-process quality system or not,” Rush said. He used a paint department as an example, declaring its responsibility is to produce a defect-free return to the OEM state in quality, color and warranty.

“Whether they know that or not,” an in-process quality technology solution would deliver that message on every repair order, he said.

Second, employees know what is expected of them, the slide said.

He suggested shops adopt an electronic and simple-to-use quality control system that allowed every employee to report any errors and receive inspection checks at every stage of the process, “each handoff in the repair cycle.” Keeping such a digital log could help shops catch the issues that lead it to miss out on more revenue.

It should permit an in-process inspection and allow real-time communication “live at the defect,” Rush said. 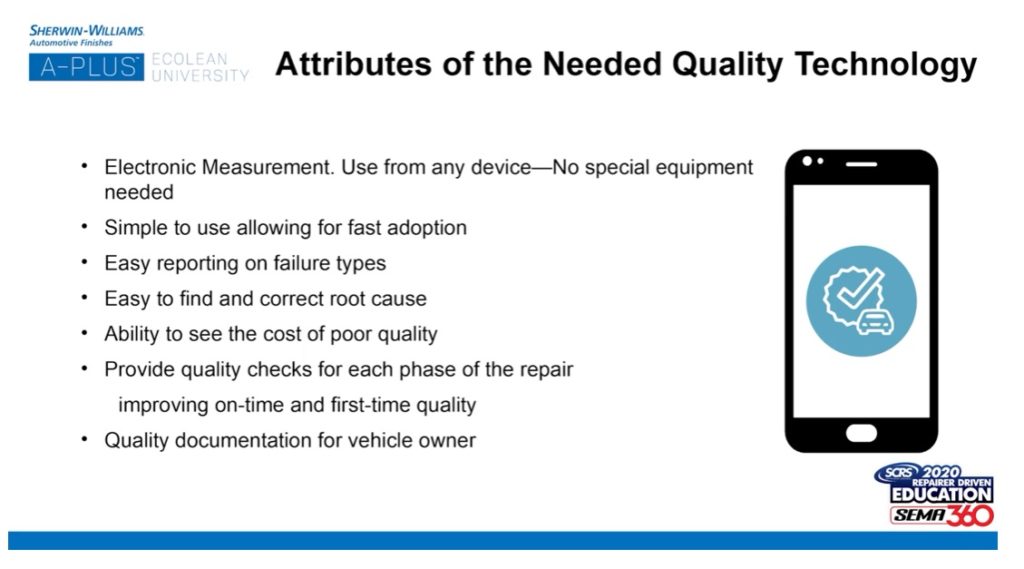 Rush described how a collision status quo without such a solution can require significant management oversight. Someone calls the boss over to look at a quality issue. A conversation with a technician who doesn’t believe there’s an issue ensues to “possibly negotiate some outcome.”

The boss needs to validate the correction, and the process continues until the vehicle is back in refinish “an hour later. That’s way too much oversight from management,” he said.

With technology, “everyone in your business becomes a quality inspector” instead of merely one or two front-office staff, according to Rush.

Rush said staff should be able to share a “failure type” and an image of the failure in real-time with the necessary parties (the tech responsible, and perhaps a manager or a front-end staffer.) The latter reduces the time the manager needs to oversee everyone.

A staffer should also be able to real-time request an inspection of their work before handing off a vehicle to the next stage of its repair, according to Rush. If the shop has an SOP, everyone’s work should be audited to that, he said.

An employee should also be able to obtain assistance in general without having to wander around looking for the appropriate colleague — and thereby having to cease work on the actual vehicle, Rush said.

In addition to whatever collision industry-specific tools are available, numerous general business collaboration platforms exist as well. These too contain features like what Rush described, such as group direct messaging, project tracking and photo or other file sharing. (For example, here’s PCMag reviews examining what the publication called the overlapping worlds of business messaging, online collaboration and project management software.)

“Why Ignoring QUALITY CONTROL Will Cost You Profits and Sales” (Replayable through Aug. 31, 2021)