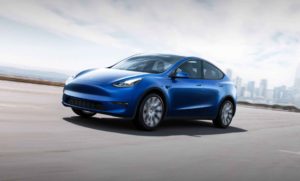 Tesla CEO Elon Musk last week announced his company had reached volume production of a Model Y rear underbody made out of a single cast part.

“For the first time in history, the entire rear third skeleton of a car is being cast as a single piece in the largest and most advanced casting machine ever made,” Musk told investors on a Wednesday earnings call. (Special thanks to Seeking Alpha, whose transcript helped us quickly identify relevant quotes and speakers.)

Tesla in April 2020 had described plans to consolidate what had been 70 Model 3 parts into two Model Y castings — with plans to eventually made the whole assembly out of a single cast part.

“We have replaced the Y rear frame rails and they do not seem to be any better or worse then the 3,” a certified Tesla repairer wrote when asked about the repair experience of the cast part. “It appears what they are doing on the rear section when its complete is similar to the Model S where the replacement rail would simply slide into place.”

Musk told an April 2019 “Ride the Lightning” podcast that the Model 3 underbody involved steel and aluminum, while the Model Y’s castings would be aluminum.

“With our giant casting machines, we are literally trying to make full-size cars in the same way that toy cars are made,” Musk tweeted Jan. 18.

Will be amazing to see it in operation! Biggest casting machine ever made. Will make rear body in a single piece, including crash rails.

With our giant casting machines, we are literally trying to make full-size cars in the same way that toy cars are made

Musk told investors Wednesday the record-setting 6,000-ton Model Y casting press would be followed by a “quite a bit bigger” 8,000-ton version for the Cybertruck and its “long truck bed.”

He said customers might see a few Cybertruck deliveries this year “if we get lucky,” but he anticipate volume production in 2022.

The earnings call also mentioned another part for repairers to keep on their radar. Tesla Chief Financial Officer Zach Kirkhorn said Wednesday the company has introduced heat pumps to the Model 3, and Musk in 2020 described the component as already existing in the sister Model Y.

Tesla delivered 454,792 Model 3s and Ys worldwide in 2020. The company doesn’t break things down more precisely between the two models.

A Tesla Model Y is shown. (Provided by Tesla)

Tesla in April 2020 described a strategy of simplifying a 70-part Model 3 rear underbody into a two-part — and eventually one-part cast component on the Model Y. (Provided by Tesla)