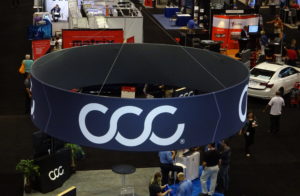 CCC announced Wednesday its existing owners and a Dragoneer Investment Group spinoff have agreed to a merger and subsequent listing of shares on the New York Stock Exchange.

The plan to go public estimates CCC has an enterprise value of $7 billion and retains all of CCC’s current investors, who will own about 83.2 percent of the company.

The enterprise value works out to 10.4 times CCC’s estimated 2021 revenue and 29.1 times its estimated adjusted EBITDA. Factoring in debt, CCC would have an equity value of about $6.54 billion. CCC expected it had produced about $600 million in 2020.

Private equity firm Advent, which owns the majority of CCC now, will continue to hold the most shares once CCC goes public. Dragoneer would own more than 10 percent of the new CCC.

“Under Advent’s ownership, CCC has cemented itself as a leading SaaS platform for the P&C insurance ecosystem,” Advent managing director Eric Wei said in a statement Wednesday. “Since 2017, we’ve partnered with Githesh and the CCC management team to accelerate organic growth through a focus on innovation, and we believe this sustained investment in R&D will deliver significant ROI for customers for decades to come. Advent is excited to partner with Dragoneer, with its preeminent technology investing franchise, to support CCC’s continued focus on digitally transforming the insurance economy. We have strong conviction in CCC’s growth potential and are not selling a single share as part of the transaction.”

Wei said during an investor presentation Wednesday that Advent had been planning the “traditional IPO path” for CCC. He said they only would have done a deal like Wednesday’s with Dragoneer, citing the “high alignment” between the two companies and Dragoneer’s sense of CCC’s quality.

CCC expects to clear $968 million under the deal and apply all of it back to its balance sheet.

“Proceeds of the business combination and PIPE will be used for general corporate purposes and to fuel additional innovation and growth,” CCC wrote in a news release Wednesday.

Dragoneer Growth Opportunities Corp. went public in August 2020 by selling 60 million shares combined with one-fifth warrants for a total of $10. The warrants allowed the owner to buy a share at $11.50.

Another 17.5 million shares were to be sold in private placement forward purchase agreements involving Dragoneer funds and the Michael Bloomberg-affiliated Willett Advisors. Underwriters had a chance to buy up to 9 million more shares at $10.

Dragoneer Growth at the time described itself as a “a newly organized blank check company formed for the purpose of effecting a merger, share exchange, asset acquisition, share purchase, reorganization or similar transaction with one or more businesses or entities.”

Dragoneer shareholders will convert their shares and warrants into shares of the post-merger CCC in a one-to-one transaction. CCC said Dragoneer’s trust account would contribute about $690 million (assuming no redemptions), and Dragoneer and Willett would contribute $175 million under the forward purchase agreements.

“CCC is one of those rare software companies that serves as the backbone of a critical industry – the P&C insurance economy,” Dragoneer porfolio manager Marc Stad said in a statement. “As the products we use and the cars we drive become more and more sophisticated, insurers, consumers, manufacturers and service providers require increasing amounts of support and coordination whenever issues occur. CCC’s advanced technology platform enables the right groups to connect quickly and efficiently, and its twenty-plus years of profitable growth are a testament to the value the company provides to its customers. The CCC team’s impressive track record of execution and financial performance speaks for itself, and we are thrilled to partner with them and Advent as they work to realize their ambitious vision for the business.”

“Proceeds of the business combination and PIPE will be used for general corporate purposes and to fuel additional innovation and growth,” CCC wrote in a news release.

CCC leadership including Chairman and CEO Githesh Ramamurthy will remain in place.

“Today is an exciting day for CCC as our return to the public markets provides us with additional sources of capital to accelerate innovation and increase the value we provide customers,” Ramamurthy said in a statement. “Throughout our history, CCC has developed pioneering technology solutions focused on enabling growth, increasing efficiency, and empowering new possibilities for all participants in the P&C insurance economy. We serve a large and interconnected market that is still in the early stages of digitizing its operations and is growing in complexity. We believe CCC is well positioned to support customer digitization in this dynamic market.”