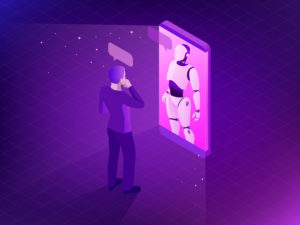 Solera said it polled 1,500 “tech-savvy” consumers, a combined 500 bodyshops and dealerships and 500 insurers across the Asia-Pacific, Europe and North America in November-December 2020.

The research revealed Feb. 2 found the customers were extremely bullish on the tech.

Solera said 76 percent of the customers “trust automotive claims driven entirely by Artificial Intelligence,” and the polling found “72% of respondents citing confidence in an automated claims and repair journey.”

Seventy-three percent of customers “would choose an insurer using AI to process claims quicker,” Solera wrote. Sixty-seven percent would switch to a rival insurer if it provided “a faster digital experience.”

And an even larger percentage — 78 percent — said they’d favor a body shop “that provides more digital channels to quote, book, and track repairs.”

More than half of the customers had already handled at least one element of an auto claim digitally, Solera said. Fifty-six percent had filed a claim online, and 51 percent tracked its status digitally.

“We’ve reached a point where leading companies are placing top priority on adapting and integrating cutting edge technology to differentiate and optimize customer experience. Those that don’t, will face competitive challenges,” Solera Chief Technology Officer Evan Davies said in a statement. “This survey simply underscores what Solera has known to be true for some time; automated processes have the power to increase customer satisfaction and even customer retention.”

Solera strategy Vice President Driaan Du Toit said in a Feb. 22 interview that “there’s always been a focus on digitalization” of claims and repair processes at Solera.

The company had felt a shift towards AI and trust in the technology would develop over time, Du Toit said. But COVID-19 produced a “significant impact” on people’s views and trust, he said. Trends expected to occur within years shortened to months, he said. 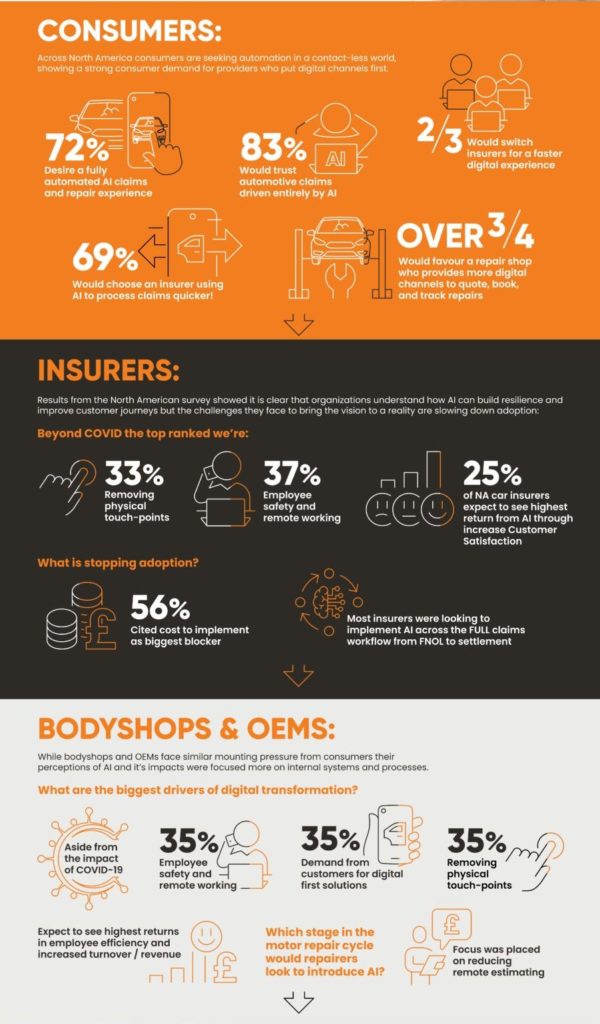 Solera’s market research proved “quite conclusive,” according to Du Toit. Automation, digitalization and artificial intelligence were “required,” not a mere “‘nice-to-have.'”

The study also “overwhelmingly” proved that “consumers would seem to want it, and trust it,” Du Toit said.

People want safety and for their assessments and claims to be handled remotely, Du Toit said. He said he thought this mindset would continue, for COVID-19 led people to realize the possibility of a risk they might not previously have considered.

Insurers, shops and dealerships have provided similar feedback as consumers, according to Du Toit. There’s an “overwhelming” desire for change fueling reliance and acceptance of claims AI and technology, he said.

He pointed out that self-service had already been increasing. “It’s not a new concept,” he said. Consumers were already familiar with the idea of submitting photos for claims.

Solera described the pandemic as the primary reason for body shop, dealership and insurer interest in going digital.

“The impact of Covid-19 was the highest ranked driver of digital transformation (in the last 6-12 months) for surveyed bodyshops and OEM dealers (55%) and car insurers (47%),” Solera wrote in additional polling information it provided.

Outside of that obvious answer, 36 percent of insurers cited growth as a motivator, 34 percent mentioned employee safety and remote work and 33 percent pointed to customer demand, Solera said in its Feb. 2 news release.

Shops and dealerships had a similar perspective on why they wished to go digital. Outside of the pandemic, 37 percent of shops and dealers were interested in the option for employee safety and remote work, and 37 percent pointed to customer demand. Nearly that proportion — 36 percent — expressed “the desire to modernize the workflow,” according to Solera.

“Bodyshops and OEM dealers would expect to see the highest return on AI in the next 12 months through increased employee efficiency (13%) and improved profitability (12%),” Solera wrote in the additional polling information.

Twenty percent of insurers worldwide felt improved customer satisfaction and retention would prove the largest ROI — and this was “ranked top” for North American insurers with a 25 percent response. Overall, insurers also saw “reduction in technology debt (15%) and improved supplier relationships (15%)” as opportunities for ROI.

Correction: An earlier version of this report contained a misspelling of Solera strategy Vice President Driaan Du Toit’s name. The article has since been corrected.

“SOLERA ROLLS OUT ITS STATE-OF-THE-ART INTELLIGENT ESTIMATING SOLUTION TO 25,000 BODYSHOPS”

Qapter surveyed 1,500 “tech-savvy” customers, 500 insurers and a combined 500 dealerships and body shops in November and December 2020. Some results are shown here. (Provided by Solera)