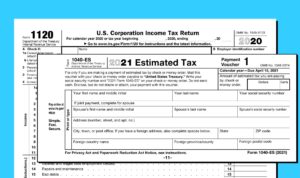 The Internal Revenue Service last week extended the 2021 federal individual income tax deadline to May 17, but small businesses and other self-employed collision repairers might still have obligations due April 15.

The IRS on March 17 announced that Tax Year 2020 income tax returns and income tax payments would be due May 17 instead of April 15. It said the extension would be automatic; Americans “do not need to file any forms or call the IRS to qualify,” according to the agency. However, it advised taxpayers due a refund to file as soon as they could, for the Treasury Department would cut those checks within 21 days for many e-filed returns.

“This continues to be a tough time for many people, and the IRS wants to continue to do everything possible to help taxpayers navigate the unusual circumstances related to the pandemic, while also working on important tax administration responsibilities,” IRS Commissioner Chuck Rettig said in a statement. “Even with the new deadline, we urge taxpayers to consider filing as soon as possible, especially those who are owed refunds. Filing electronically with direct deposit is the quickest way to get refunds, and it can help some taxpayers more quickly receive any remaining stimulus payments they may be entitled to.”

This meant any corporation, “period,” remained bound to the April 15 date, according to Lauritsen. This applied to “whatever type of corporation you’re trying to come up with,” she said Tuesday.

The AICPA also pointed out that estimated tax payments — a potential consideration for self-employed individuals, sole proprietorships and partnerships — remain due April 15.

“This relief does not apply to estimated tax payments that are due on April 15, 2021,” the IRS wrote in a March 17 news release announcing the changes. “These payments are still due on April 15. Taxes must be paid as taxpayers earn or receive income during the year, either through withholding or estimated tax payments. In general, estimated tax payments are made quarterly to the IRS by people whose income isn’t subject to income tax withholding, including self-employment income, interest, dividends, alimony or rental income. Most taxpayers automatically have their taxes withheld from their paychecks and submitted to the IRS by their employer.”

“As you earn it, the government wants their slice of the pie,” Lauritsen said.

Lauritsen said that during a normal year, taxpayers who don’t automatically have their taxes withheld often use their previous year’s income tax return to estimate their first quarter payments.

“I would then make a quarterly payment,” she said.

If the 2020 income tax wasn’t due until May 17 but the government still required estimated payments April 15, “there’s no way to reconcile the two,” Lauritsen said.

Determining the amount of estimated payments to comply with the April 15 deadline involved an effort similar to preparing one’s taxes. “That’s just double work,” she said.

A similar issue could apply with business structures like partnerships. The Form 1065 deadline for partnership tax returns was March 15, but partnership returns are an example of what’s known as “flow-through returns,” according to Lauritsen.

The partnership doesn’t pay tax; instead, the income and tax burden flows to the individual partners — who would then have to produce a quarterly estimate and run into the same issue as described above, according to Lauritsen.

The AICPA has argued that the IRS’ tax extension is too limited in scope and has called for a more sweeping Tax Day shift for 2021.

Lauritsen said this occurred last year. The IRS offered a July 15, 2020, extension on some — but not all — taxes as a COVID-19 relief measure. This engendered a “huge pushback,” and the IRS wound up extending all deadlines between April 1 and July 15, 2020, to the latter date. “They literally captured everything,” Lauritsen said.

“While we appreciate the IRS’ recognition that a filing deadline postponement is indeed necessary, the announcement is far too selective in who is receiving relief,” AICPA CEO Barry Melancon said of the 2021 deadline in a statement March 16. “In fact, the taxpayers who are most likely to benefit from this additional time are taxpayers who are able to meet the original filing deadline.”

The organization has advocated a June 15 deadline for payments and filing. The IRS had already given residents in Texas, Oklahoma and Louisiana that deadline for individual and business tax returns because of their February winter storms. (This date isn’t changed by the May 17 deadline given to the rest of the U.S.)

“Small businesses hold the key to rebuilding our nation’s economic infrastructure as cities and states slowly begin to re-open,” Melancon said in a statement March 17. “The IRS’ decision to intentionally omit estimated payments – a method used by millions of small business owners – in the deadline extension announced yesterday is deeply concerning. …

“The AICPA emphatically calls on the IRS to include estimated payments and all other filings due April 15th as part of the deadline extension. Absent IRS action, the AICPA encourages Congress to take action to extend the deadline to June 15th.”

It’s also worth noting that your state income tax’s deadline might not be extended.

“State filing and payment deadlines vary and are not always the same as the federal filing deadline,” the IRS said March 17. “The IRS urges taxpayers to check with their state tax agencies for those details.”

“AICPA: Many Taxpayers Will Not Benefit from IRS Tax Deadline Extension”