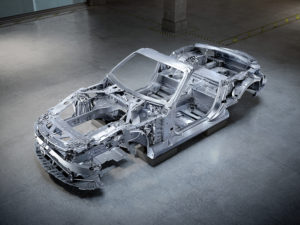 “The development team in our bodyshell design area was faced with an extremely appealing, but also challenging task: when we were commissioned to undertake the overall development of the new SL, we started from scratch, so to speak, without building on any existing structure,” Mercedes Chief Technical Officer Jochen Hermann said in a statement May 19. “We can be justifiably proud of the result, which proves, once again, the high level of development competence in Affalterbach. On the one hand we have managed to reconcile the high package demands, while on the other we have been able to achieve excellent rigidity values in all areas in conjunction with a favorable weight, so providing the basis for agile driving dynamics and exceptional comfort.”

The body-in-white weighs just 595 pounds with closures and attachable parts removed. Its torsional stiffness increased by 18 percent, and its transverse rigidity and longitudinal rigidity are 50 percent and 40 percent higher than the Mercedes AMG GT Roadster, respectively.

“The improved introduction rigidity for the chassis connection ensures sporty driving performance with precise handling and high agility,” Mercedes wrote in a news release May 19.

The OEM said it tailored the structure to manage rigidity, mass and crash forces. This kind of precision would seem to make it imperative repairers follow OEM procedures to make sure Mercedes’ hard work isn’t thrown off by improper alterations to the structure. 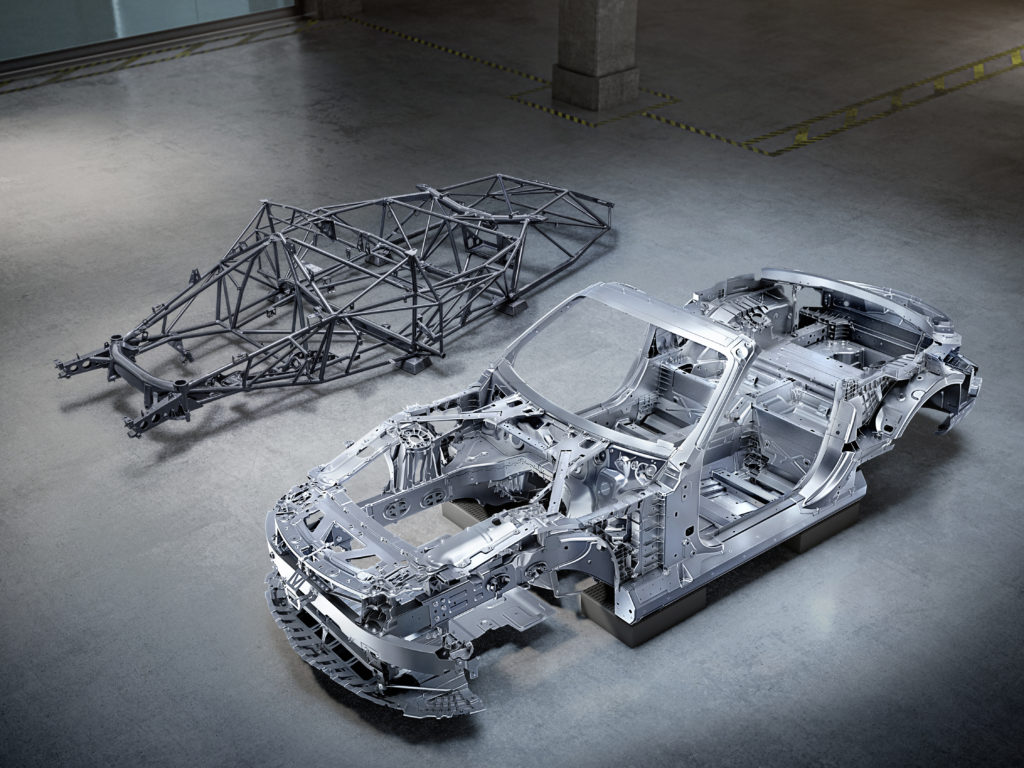 “The frame construction, designed specifically to cope with tensile and compressive stress, allows for small tube diameters,” Mercedes wrote. “Stability is ensured by numerous closed triangles, which transfer the occurring forces to a tubular pyramid at the end of the engine compartment. …

“Cast aluminum components are used at the nodal points where forces come together or where functions are highly integrated, i.e. where large forces have to be transferred. Cast components have the advantage of enabling the specific discharge of forces, and make it possible to vary wall thicknesses locally according to the loads encountered. Areas of greater rigidity can therefore be realized where required, for example at the chassis connections. Moreover, only the necessary wall thickness is provided at any point of the component, which saves weight in the areas subject to low forces. …

“The entire vehicle concept is designed towards the lowest possible center of gravity. This applies both to the low connection points for the powertrain and axles and to the lowest possible arrangement of the rigidity- relevant bodyshell structure. Examples of this are the connections between the front and rear sections and the passenger safety cell, with their high flexural strength and torque rigidity, systematically realized via force paths that are as low as possible.” 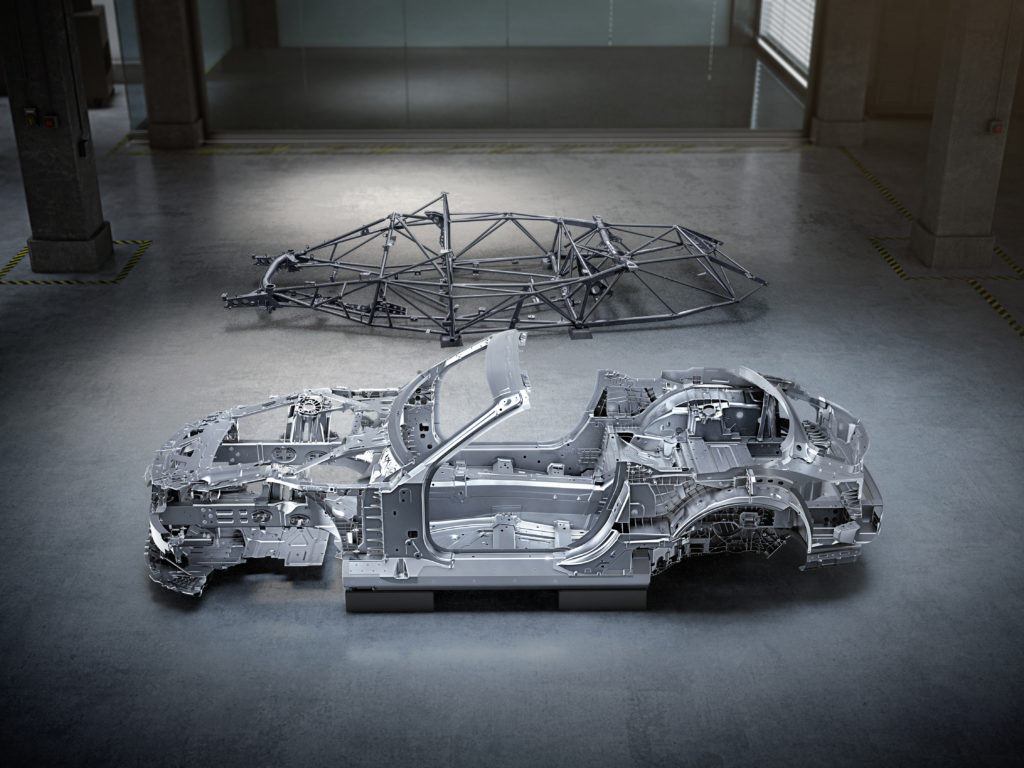 Mercedes said its targets for the new SL also “demanded a much more comprehensive scope than for the predecessor model series. In particular, the basic layout with 2+2 seats and the potential to accommodate a wide range of drive systems were realized here for the first time in an SL, a task that presented the developers with completely new challenges in terms of complexity.”

In terms of materials, Mercedes singled out aluminum underbody thrust panels and front and rear “function-integrated struts” in addition to the cast aluminum parts described above. The OEM said the instrument panel beam is magnesium, the front module cover bridge is a fiber composite, and the windshield frame is “high-strength, hot-formed tubular steel.” It said the steel windshield frame and “a system behind the rear seats that extends at lightning speed if necessary” would protect convertible occupants from rollovers.

Mercedes joined these various mixed materials to each other or dissimilar substrates using “MIG welding, laser welding, punch riveting, blind riveting, MIG soldering, glued seams or flow hole bolts.” Clearly, laser welding won’t be an option to body shops, but we’ll have to see how many of these other joining techniques would appear in Mercedes’ instructions for the automotive aftermarket. 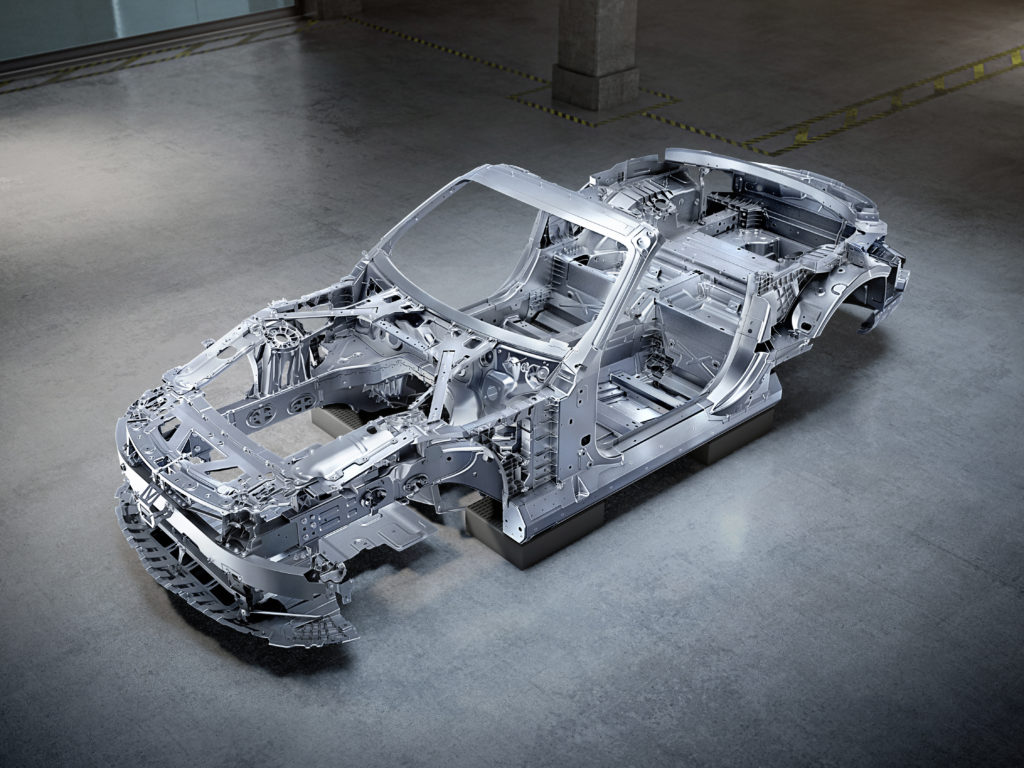 Repairers might wish to note not just the SL’s complexity but how quickly and abstractly the design was produced. One wonders if this means repairers will see a trend of OEMs changing structures quickly, either with reduced time between new design generations or with increased iterations within a generation, such as a body tweaked mid-run to obtain a better IIHS score.

“Despite the extremely high quality requirements, the development was implemented at a record-breaking pace: The pre-development was done in only three months,” Mercedes wrote of the upcoming SL. The OEM said it was able to move from giving an SL development mandate to six people all the way to production in just three years.  It also said the engineering software was so good the automaker could just order the tools for production “without a physical prototype of the chassis.”

Featured images: The next-generation Mercedes SL body is shown in this photo released by Mercedes in 2021. (Provided by Mercedes)