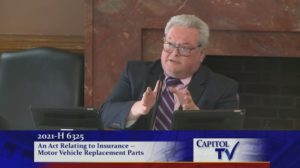 A Rhode Island bill would require insurers to select recycled parts with equal “fit, quality, performance and warranty” as new ones and carry “the same year or newer” and “the same or less mileage” as the customer’s vehicle.

“You have to have the same specs,” sponsor and House Corporations Committee Vice Chairman William O’Brien, D-North Providence, said while discussing part age during a committee hearing May 20.

The bill would also give insurers five other paragraphs of standards related to sourcing used parts.

“To the extent practical, an insurance company shall not require the use of multiple parts distributors to provide parts for a single repair and shall limit the distance of the sourced parts to fifty (50) miles, and provide delivery unless agreed to by the vehicle owner,” House Bill 6235 states. Rhode Island is only 48 miles long from north to south and 37 miles wide from east to west, according to the state.

Insurers must pay for the cost of modifying suitable used parts and for the costs associated with dealing with “used parts which do not result in the vehicle being repaired to its condition prior to the loss,” according to HB 6235.

If the part chosen by an insurer failed to restore the vehicle to the “condition prior to the loss,” the insurer must use an OEM part, according to the fourth of six standards established by the bill.

The bill describes a process for a shop and insurer to manage an unsuitable part in the next two standards:

(5) The automobile body shop shall promptly notify the appraiser if the used part specified by the insurer does not result in the vehicle being repaired to its condition prior to the the loss and permit the appraiser to reinspect the vehicle and make appropriate supplemental authorizations, if necessary; and

(6) The automobile body shop shall provide documentation of used parts, which do not meet the requirements of this section, as reasonably requested by the insurer. The insurer shall be permitted to exercise any available rights of recovery against the used parts distributor.

Casale’s Auto Body President Thomas Casale told the committee that bill and HB 6234, which was also heard by the panel May 20, “will help clarify constant problems in our industry.”

The Corporations Committee voted to hold HB 6235 and all the other bills on the agenda for further study.

National Association of Mutual Insurance Companies Northeast regional Vice President Rory Whelan said “our main concerns” were Standards No. 4 and 5 in the bill: The mandate that an OEM part be used if a part was inadequate and the language regarding the body shop notifying the appraiser of this deficiency.

Whelan said the language didn’t require the body shop to provide evidence a part was insufficient. “The auto body shop simply says so,” he said.

However, Standard No. 5 does describe an adjuster having the right to “reinspect the vehicle,” and Standard No. 6 calls for a shop “provide documentation of used parts, which do not meet the requirements of this section, as reasonably requested by the insurer.”

But Whelan said the bill offered no chance for an adjuster to challenge this determination. The repairer has the “exclusive power to say no,” he said. 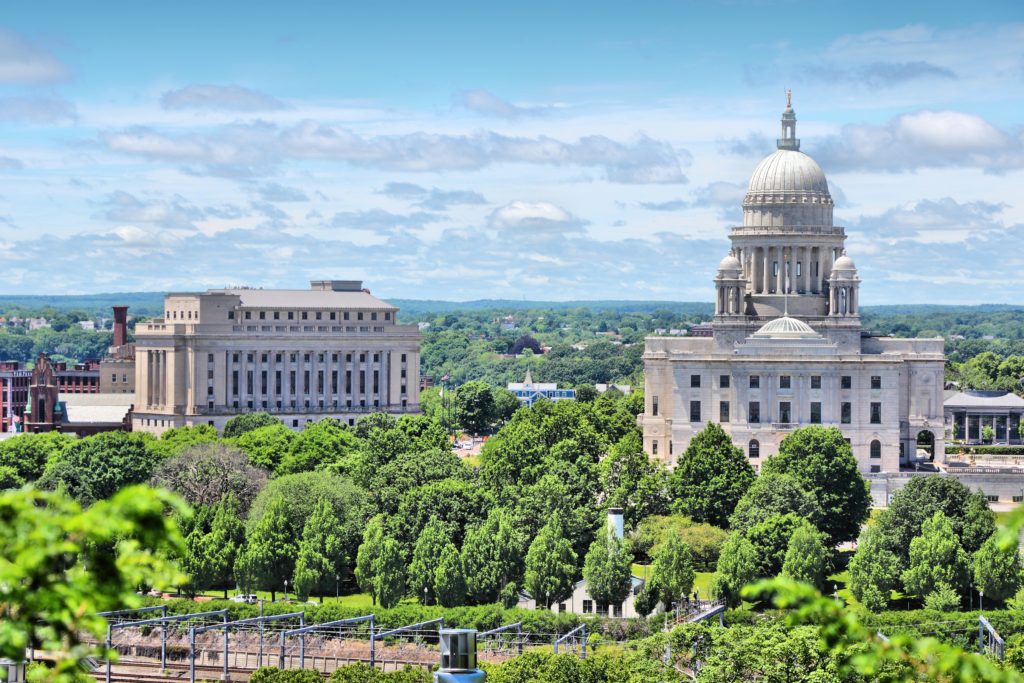 However, appraiser Robert Godfrey argued that the status quo of sourcing parts from farther away extended cycle times.

“That tends to delay the repair process,” he said. This posed an issue if the claimant was running out of rental car coverage, he said.

Godfrey argued that while “shops have no problem” with used parts, it shouldn’t be a situation for “multiple finds” of parts sourced from a variety of suppliers.

Repairers wish to deal with people they knew and local businesses, and they could refuse an unsuitable part if one were delivered, according to Godfrey. But if a part was to be shipped from a few hundred miles away, the supplier would wish to be paid in advance, he said. If there’s a problem with the part, “the chase is on” for the repairer, he said.

“Let them deal with the local market,” Godfrey said.

Randy Bottella, owner and operator of Reliable Collision, said a common insurer practice today involved finding parts in faraway states which could be had for $50-$75 cheaper than a local part. If there’s a problem with one of these parts, it’s a “logistical nightmare” to address, he said.

Local suppliers with which the shop had an existing relationship won’t sell inadequate parts, Bottella said. “It does much better,” he said.

He also pointed out that in a situation where a major savings could be realized from a distant part, the geographical restriction could be lifted with the vehicle owner’s consent.

“No problem,” Bottella said. “That can happen.”

The point was to prevent an insurer from first picking a part halfway across the country based on price, he said.

She also argued that no such distance restriction existed on sourcing OEM parts. However, she also argued that OEMs aren’t making parts older than 10 years available, and few dealers hold onto parts that old. Those that do might not be located within 50 miles, she said.

Advanced Remarketing Service CEO Joseph Hearn said the bill “narrows the commercially available” options to cut costs and said he opposed “localism” and a “locally sourced” parts mandate. He said while he could understand the preference to work locally, consumers lived in an e-commerce age, and shops could develop relationships outside of their area. A part with the same cost and expense in the “same time window” should be fine, he said.

Despite the geographic limitation seeming to favor them, LKQ Northeast government affairs manager Andreas Heiss said the bill would put LKQ’s two Rhode Island facilities at risk. He said it hurts the recycled parts industry in Rhode Island. He called the 50-mile radius “irrational” and also cited the Commerce Clause.

“These parts aren’t coming via horse and buggy,” Heiss said.

Heiss said the bill would “only benefit the repair shops” and increase repair costs “while putting hard-working Rhode Island used part suppliers out of business.” 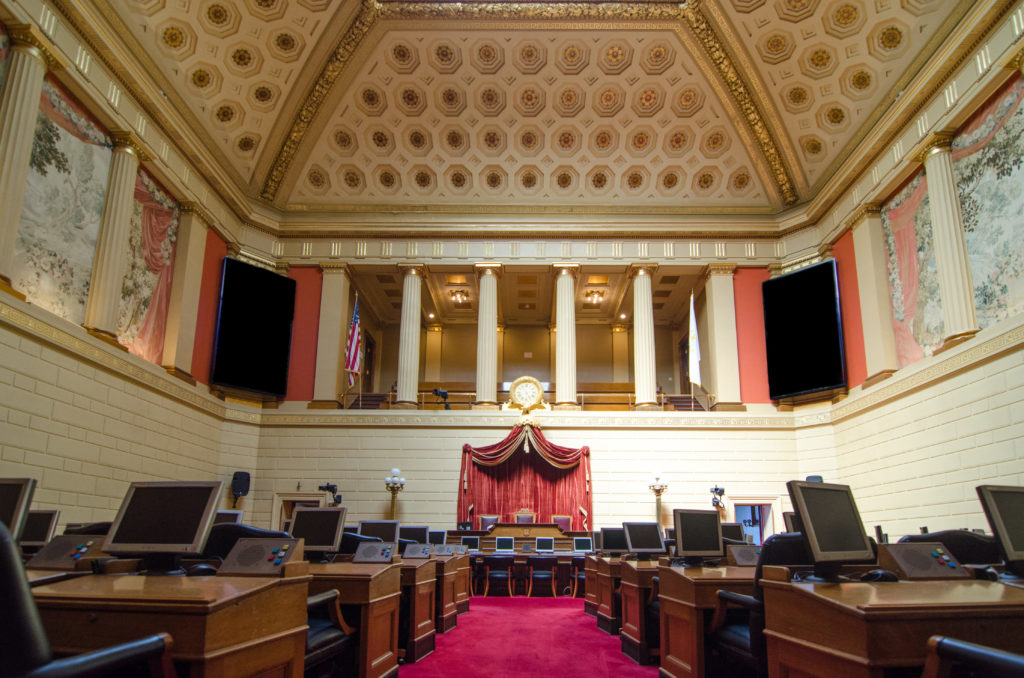 He said his trade group objected to the “nonsensical requirements” forbidding sourcing “beyond a certain geographical area” and on mileage.

“We have no issues with the provisions of the bill which deal with the use of appropriate parts, paying for their fit, paying for them to be finished, all that sort of stuff,” O’Brien said.

Bottella called it “absolutely untrue” the bill restricted the use of recycled parts.

It simply established a standard for used parts, something which didn’t currently exist, according to Bottella. “There’s absolutely zero,” he said.

Bottella asked if you would would want an older part with extensive mileage used on your vehicle. “Obviously not,” he said.

Godfrey called HB 6235 a “good bill” because it defined a used part.

“There is no definition of what a used part is,” Godfrey said.

Godfrey said he had been an appraiser for many years. Historically, the term “LKQ” — “like kind and quality” — was applied to recycled parts, and the concept seemed understood. “We really had no issues,” Godfrey said.

But the aftermarket parts industry now employs the term, and used parts are left “in limbo,” according to Godfrey. Appraisers now declare that the concept of like kind and quality refers instead to aftermarket parts, and there’s no used part definition, he said.

Godfrey said that in the case of a 2011 vehicle which uses the same fender as a 2007 model, some appraisers would attempt to use the 2007 version.

“It definitely does need a definition,” he said.

But Blalock argued that recycled parts from the same vehicle model series “should always be allowed.”

“They are all the same parts,” Heiss agreed. He said some new OEM parts might also be older than the age of the car.

Of course, such OEM parts still have no mileage. But Heiss said insisting that a used part have the same or less mileage as the policyholder’s vehicle “is not a good standard,” and Blalock said mileage had no bearing on the function of many components.

Blalock used the example of a 2015 Subaru Outback with 30,000 miles kept in a garage in a state with low humidity and outside of the Snow Belt. Its parts would be ineligible for 2016-19 Subarus within the same series, even though it would be an “ideal part” for those vehicles.

She said its standards were actually “baseless restrictions” meant to bar everything but new OEM parts, and she noted that the language wasn’t imposed on new OEM parts or remanufactured components.

Auto Care Association state affairs senior director Tom Tucker told lawmakers the bill would prohibit specialty aftermarket parts. As he described it, the issue lay with the language that an insurer must write for a new OEM part if their used part failed to return the vehicle to preloss condition.

The “consumer did not have or want OEM parts” in situations where specialty parts like oversized tires had been installed on the vehicle brought in for repair, he said.

This customer might be able to still get their wish. HB 6235 appears to only be creating law related to used OEM parts, not new or used aftermarket parts.

The bill adds a definition to Rhode Island General Law 27-10.2-1 that a “Used part” is “a used original equipment manufacturer part.”

The term “Original equipment manufacturer” and “OEM” had already been defined under 27-10.2-1 as “the manufacturer of the motor vehicle being repaired.” So

27-10.2-1 also already defines “Aftermarket part” as any part “that is not an original equipment manufacturer part.” And General Law 27-10.2-2 offers customers the option to request aftermarket parts in insurance claims.