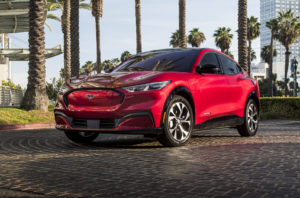 The 2021 Ford Mustang Mach-E’s body-in-white is nearly all steel, but it presents body shops with some materials variety when it comes to closures.

Ford vehicle hardware modules integration chief engineer Mark Mikolaiczik broke down the fully electric crossover’s various closure substrates during the May 19 Great Designs in Steel. He called it a “wide range of materials.”

According to a slide from his presentation, 29 percent of the vehicle closure materials involve substances other than steel. This tally counted the fenders as closures.

The hood and fenders are 6000-series aluminum except for a small component sandwiched between the hood outer and inner.

The rear liftgate features a thermoplastic outer and a fiber-reinforced plastic inner.

The Mach-E’s doors involve high-strength steel outers over mild-steel inners. Boron impact beams are sandwiched between the two parts, as is a mild steel beam. (Make sure you determine which is which!) 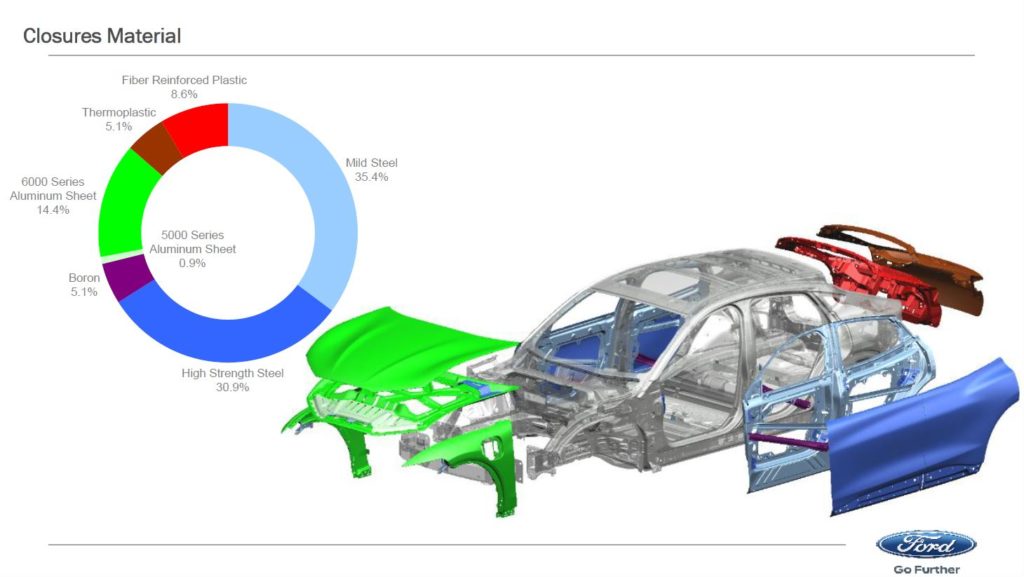 The body-in-white itself uses what Ford divided into five different classes of steel and an extruded aluminum bumper beam.

“From a structural development standpoint, I think you’ll be impressed” by the body’s material diversity, Mikolaiczik said.

A Ford slide described 9.5 percent of the body-in white as “Ultra High Steel.” This includes 1,500-megapascal rocker sections and 1,700 MPa roll-formed tubes running up the inside of the A-pillar and roof rails, according to Mikolaiczik. 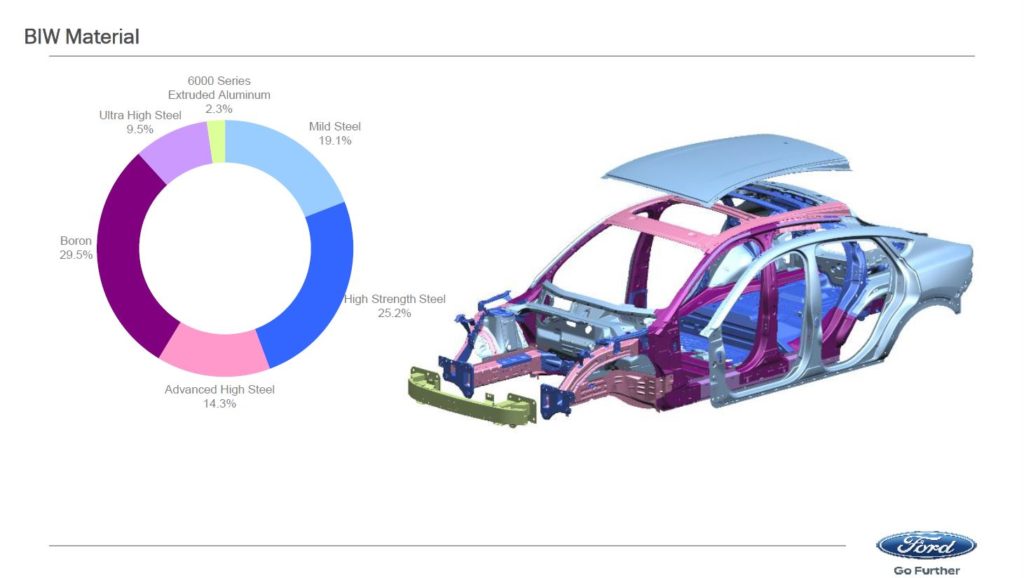 Mikolaiczik later described the rocker as a three-piece Martensitic roll-formed setup with steel strengths ranging from 1,500-1,700 MPa. He said this permitted smaller sections.

Through-bolts unite components to achieve a “solid node” for the IIHS’ small-overlap crash test, according to Mikolaiczik. The test involves a vehicle running the outer 25 percent of its front end into a barrier at 40 mph.

According to a slide, the rocker extends to the leading edge of the hinge pillar to engage with the small-overlap collision early, and Mikolaiczik said this allowed Ford to “rigidize” backup structure for that crash energy.

The rockers were designed for both side-impact and small-overlap crashes, according to Mikolaiczik. He said the ultimate design saved $50 per vehicle compared to the company’s early plans, which the slide suggested might have been extruded aluminum.

The three-piece design allows “B-pillar pass-through,” and the split geometry collapses together in side impacts to “maximize energy absorption,” Mikolaiczik said. 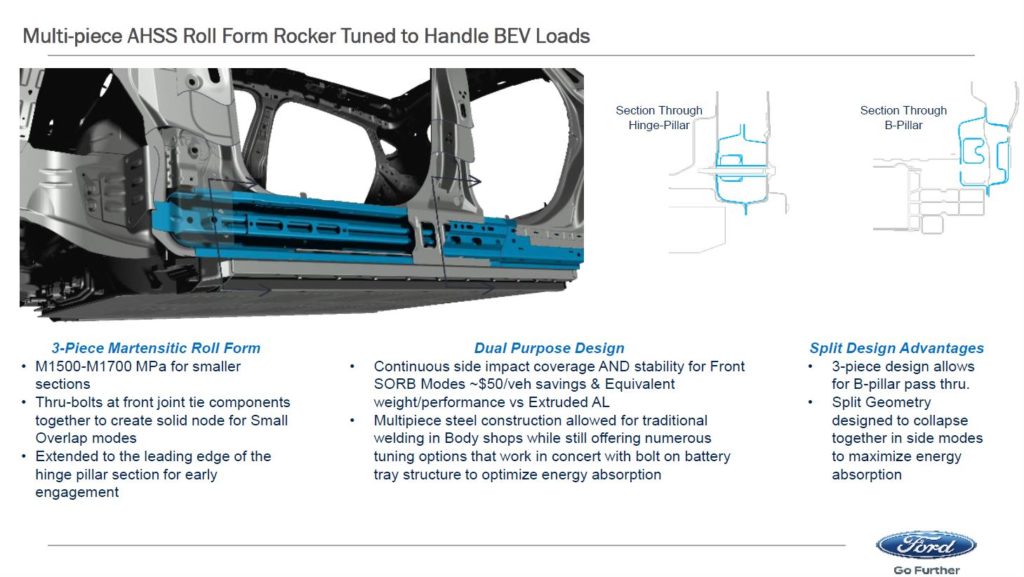 Mikolaiczik said the body features an “extensive use of boron,” including locations like the hinge pillar, rocker panel and vehicle crossmembers. The light, strong steel is actually the most common material within the Mach-E body-in-white. It comprises 29.5 percent of the structure, according to the Ford slide.

The boron B-pillar involves tailor-rolled blanks with a structural insert, which saved nearly 3.97 pounds compared to a press-welded blank, according to Mikolaiczik. He said it included a boron soft zone at the base to produce a “balanced B-pillar response” during high energy loads and a “strain interface” to the rocker.

Another 14.3 percent is what the slide called “Advanced High Steel.” Mikolaiczik said its locations included the DP600 shotguns and front rails.

High-strength steel was the second most prevalent type of steel and represented 25.2 percent of the body. Mikolaiczik said this included the bake-hard 210 rear floor and the high-strength, low-alloy 240 front floor.

It also appears to include a high-strength, low-alloy 350 “Y-Brace” structure found in the quarter panel.

Mikolaiczik said the front part of the Y-shaped feature reaches the C-pillar, transferring shock and subframe load up the pillar and increasing shock stiffness. It also stabilizes the C-pillar in a roof-crush scenario, he said.

The back of the Y resists the D-pillar and keeps it from intruding should the Mach-E be rear-ended, Mikolaiczik said. It also lets Ford lift the back of the body when running the Mach-E through an E-coat bath, he said.

The base of the Y manages shock and suspension loads, he said.

Altogether, the part generates enough stiffness and handles enough energy that Ford can get by without a “heavier traditional full quarter panel,” according to a slide. 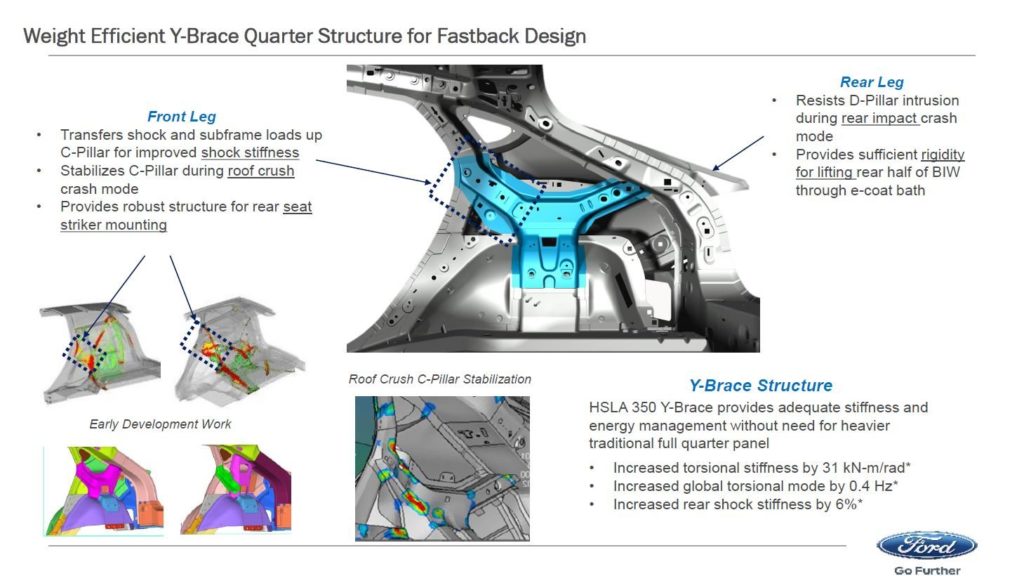 Only 19.1 percent of the Mach-E body is mild steel. Naturally, this proportion falls if the customer buys a Mach-E with a glass roof instead of the mild steel roof found on the Ford slide.

The panoramic glass roof is surrounded by a DP 780 steel structural halo, Mikolaiczik said. This steel part allowed Ford to dispense with crossbows, provided additional strength for the glass roof loads and permitted a common side assembly without an addition 9.9 pounds of “scar mass,” he said.

Mikolaiczik said Ford also developed a “structural ring adapter” to address the height difference between the stamped-steel and glass roof and keep the urethane application consistent across both. 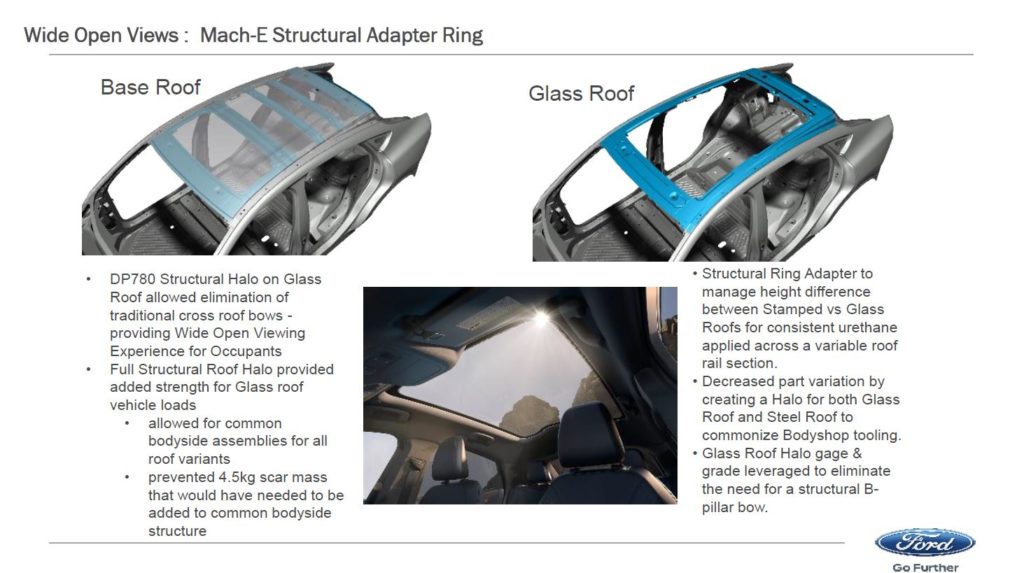 The 2021 Ford Mustang Mach-E’s hood and fenders are aluminum. The doors are steel, and the liftgate is a mix of thermoplastic and fiber-reinforced plastic. (Provided by Ford)

Steel and aluminum concentrations on the 2021 Ford Mustang Mach-E are shown. (Ford slide provided by Great Designs in Steel)

The 2021 Ford Mustang Mach-E can be purchased with a metal or glass roof. (Ford slide provided by Great Designs in Steel)