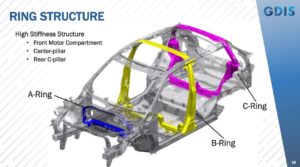 In addition to highlighting various steel grades (see coverage here), General Motors last month drew attention to some of the structural and joining details body shops would encounter on the 2021 Chevrolet Trailblazer.

For one thing: “We put three rings into Trailblazer’s body,” General Motors upper-body engineer Youngtaeck Kim’s told the virtual Great Designs in Steel on May 19.

The “A-Ring” is a smaller structure within the engine compartment, based upon a GM slide. The B- and C- rings run up their namesake pillars and across the floor and ceiling as well.

Kim said GM originally had planned to introduce a D-ring setup in tied to the opening for the trunk. But this would have required many more parts, he said.

Then they realized the Trailblazer lacked quarter panel glass and “took advantage of it,” Kim said.

They switched to a C-ring right behind the rear door aperture. “The performance was increased,” Kim said — a slide mentioned improved stiffness — and GM could save 8.8 kilograms of mass compared to the old design.

“Overall, we got a better mass balance” with a structural C-ring than a structural D-ring, according to General Motors body structures global chief architect Warren Parsons, who also appeared to represent GM during the talk.

“It’s because it’s short,” Parsons said. For a longer vehicle like the Chevrolet Traverse, a D-ring would make more sense, he said.

But the Trailbazer’s rear doorway edge is fairly close to the end of the vehicle, Parsons said. Because of this, GM’s research found the better design would be to place the mass of the structural ring closer to the door. This “was kind of a surprise,” Parson’s said.

Kim also highlighted another aspect of how body-in-white-parts connect to one another. He showed seven examples of what GM calls a “box-to-box 3D joint.” 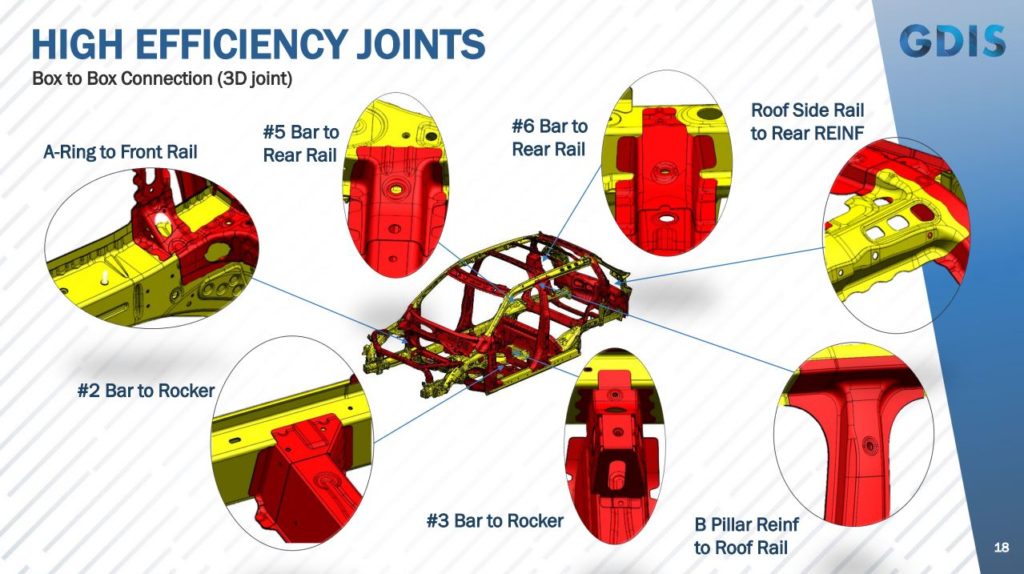 The joints use structures including flanges to connect two perpendicular parts at multiple points.

“With this joint, we can deliver load more efficiently to another structure,” Kim said.

Kim later showed how GM managed energy load in frontal crashes. The front of the Trailblazer is the energy absorption zone, while the passenger cage itself is known as a protection zone.

GM splayed the front frame rails outward rather than leaving them facing forward in two parallel lines. The design produces improved engagement in small-overlap crashes, Kim said. The rail connects to an “Elephant Trunk” structure curving up and back toward the hinge pillar, according to a slide. 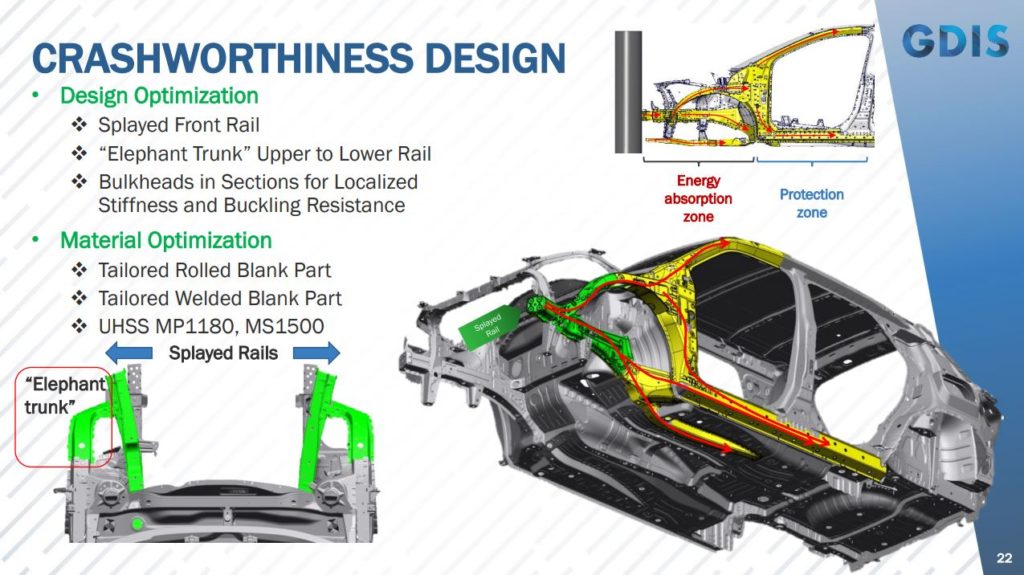 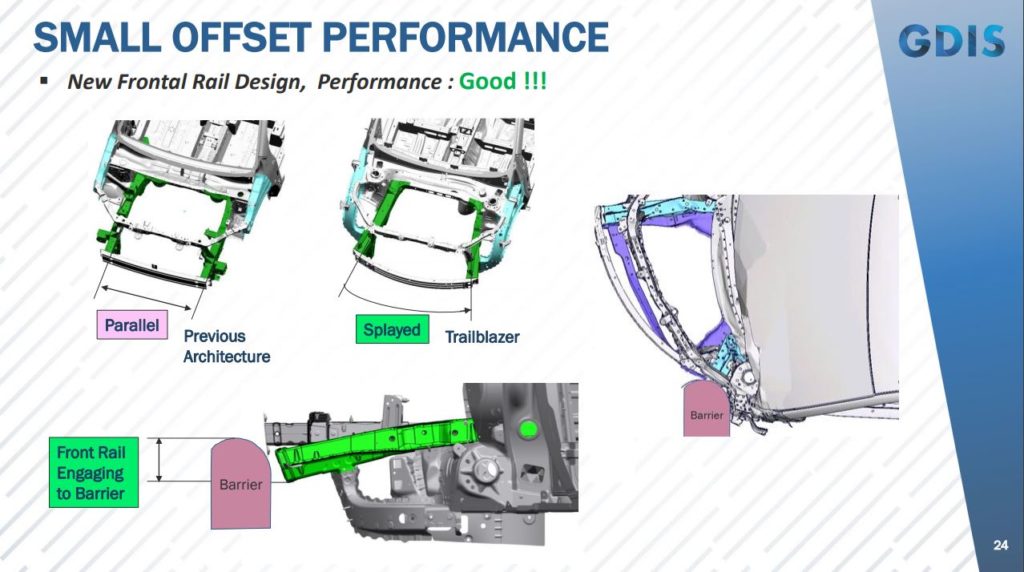 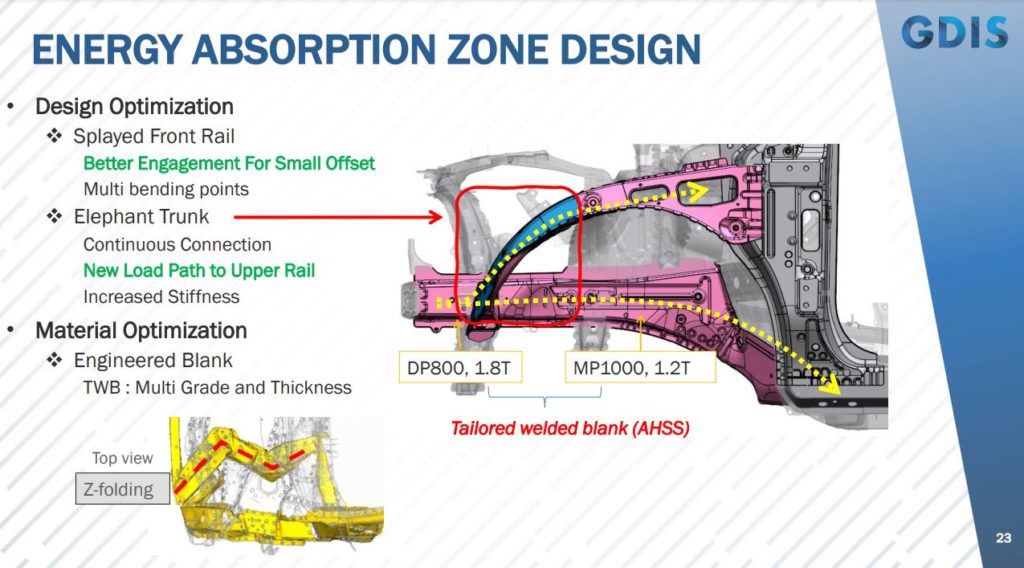 Kim said the Elephant Trunk gave GM had a continuous connection between the upper and lower rail, a new load path and higher torsional stiffness.

Over in the protection zone, Kim showed how the angle connecting the rocker to the hinge pillar had been reinforced with a series of internal bulkheads.

GM also showed off some tricks it used for the physical act of connecting Trailblazer body parts to one another.

The liftgate will rise to reveal a cleaner aperture than the previous-generation TrailBlazer. Spot weld marks found on the gutter system of the rear hatch opening are no longer present on the successor Trailblazer. 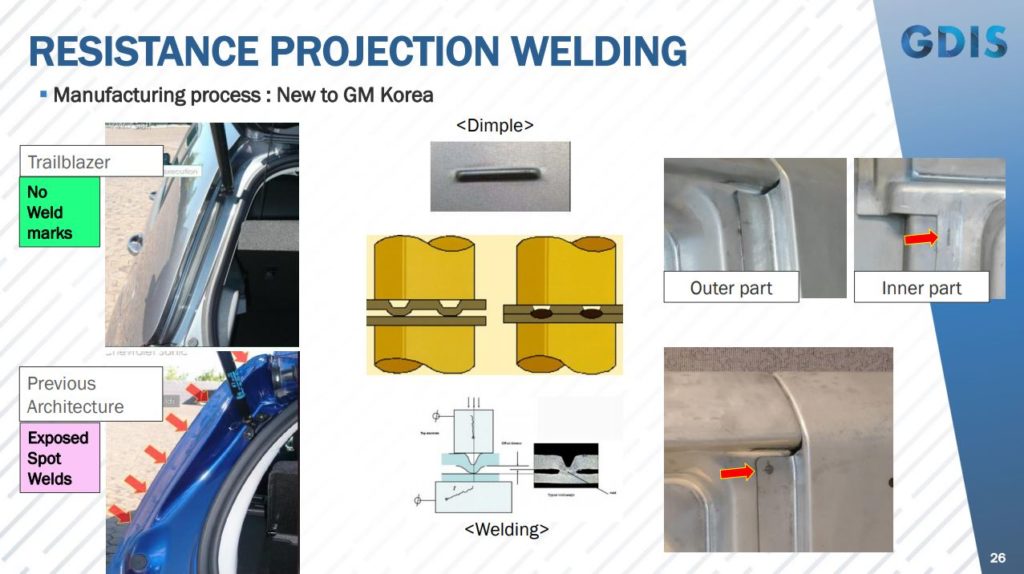 Kim said GM used a technique called resistance projection welding to connect parts without the telltale spot weld marks it had happened. “We make a dimple” in the part and add current and pressure, producing a small weld nugget in the dimpled area, Kim said. The weld itself is so small it “cannot be visible from outside,” he said.

Parsons said it’s a two-sided system. A “preform effort” to apply the dimple is needed in the outer, and then a weld gun with “special tips” completes the weld, he said.

GM dropped spot welding outright for joining the Trailblazer’s roof to the bodyside outer. Instead, it uses laser brazing to deliver a “clean and aesthetically pleasing joint” for the customer, Kim said.

Kim said the OEM laser-brazes the bodyside outer in the factory, followed by “robo grinding for better appearance.” A final stage involves inspection and repair, he said.

Parsons said the technique delivers a “positive business case.” He said the OEM could save on the expense of molding, and give a better-looking vehicle to the customer. Amortized over the life of the architecture, “it comes out positively,” he said. 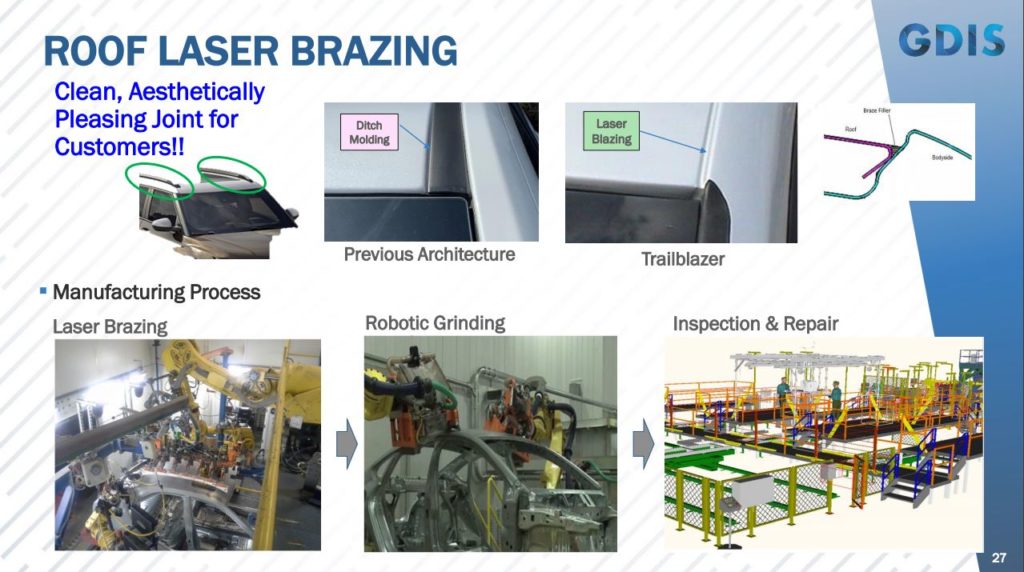 The 2021 Chevrolet Trailblazer has three structural rings, according to GM. (General Motors slide provided by Great Designs in Steel)