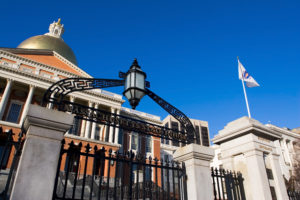 The Alliance of Automotive Service Providers of Massachusetts recently met with lawmakers to advocate for bills requiring insurers to reimburse labor rates adjusted for inflation.

“We have already made tremendous strides during this current legislative session to have our voices heard on behalf of consumers, and we look forward to further promoting this legislation when it is heard in the near future,” Executive Director Evangelos “Lucky” Papageorg said, according to the trade group.

House Bill 1111 and the nearly identical Senate Bill 709 would demand insurers cover at a minimum the 1988 auto body repair labor rate, adjusted for all the inflation since. The year reflects the date of the Insurance Reform Act, legislation intended to cut state auto insurance premiums.

After that initial floor is locked in, the rate would be adjusted annually based on the Bureau of Labor Statistics’ Northeast Consumer Price Index, which is the inflation rate for the region including Massachusetts.

Both bills were sent to the Joint Committee on Financial Services on March 29, but no further action has been taken.

The AASP-MA estimates that the state’s 1988 labor rate of $30 adjusted for inflation would be $68, rather than the average of $40 encountered today.

HB 1111 and SB 709 would increase the Massachusetts rate by half the difference (so around $14) between the current rate and the 1988-adjusted-for-inflation rate thirty days after the bill becomes law. The other half would be added a year later — but “will include the rate of inflation for the previous twelve-month period.”

“If there were no insurance, everybody here would be very comfortable competing for and posting their own rate – whatever it happened to be – based on what their cost of doing business was,” AASP-MA Jack Lamborghini (Total Care Auto Repair) said, according to the AASP-MA. Massachusetts is experiencing “big business trying to control small business to the detriment of every consumer and the entire collision repair industry,” he said, according to the trade group.

The law matters to consumers as well. Anything an insurer refuses to reimburse could be levied upon the vehicle owner, who is the body shop’s actual customer ultimately bearing responsibility for the bill. According to the AASP-MA, shops investing to keep current on modern vehicles “are struggling to remain profitable under the average rates paid by carriers, thus leading them to make the difficult choice to pass these costs on to consumers.”

“In order to keep pace with rising costs, shops are needing to start charging the consumer for the shortages that aren’t being paid for by the insurance company. That’s wrong,” Papageorg said, according to the AASP-MA. “The insurance company is selling an indemnification policy that is supposed to be making the person whole again. The customer shouldn’t be put into the predicament of having to come up with money after they’ve already paid for their insurance policy.”

We couldn’t get regional data for specific expenses, but nationally, all U.S. prices rose an average of 126 percent between October 1988 and June 2021.

“The insurance industry is always going to say, ‘We can’t afford it,’” association lobbyist Guy Glodis (Glodis Group), said according to the trade group. “With that said, record profitability by the insurance industry is publicly disclosed. Warren Buffett has said that the most successful stocks over time have been insurance; they have consistently done well over the last three or four decades. But to flip it, when insurance reform started in 1988, we had one of the highest Labor Rates in the country. In 2021, we’re the lowest Labor Rate in the nation. One side has record profitability; on the other end, we have the lowest rate in the country. I think this bill really addresses that issue.”

CCC estimates the average auto body labor rate on estimates involving an insurer was $52.27 in 2020.

According to the AASP-MA, the state is more than a decade overdue in addressing Massachusetts’ auto body labor rates. As the trade group characterized it:

AASP/MA Legislative Director at-Large Tom Ricci (Body and Paint Center; Hudson) explained that the need for this legislation stemmed from recommendations made several years ago by a special state-sanctioned committee comprised of auto body and insurer representatives that was created to study rate-setting practices in Massachusetts. At the completion of this study in 2008, then-Office of Consumer Affairs and Business Regulation representative Dan Crane recommended that the Legislature should act if insurers failed to do something to address the current reimbursement rate by the following year. With no action taking place since that time, the need for passage of House Bill 1111/Senate Bill 709 is stronger than ever.

Be heard: Massachusetts lawmaker contact information can be found here.

Featured image: The Massachusetts Capitol is seen in the late afternoon. (APCortizasJr/iStock)