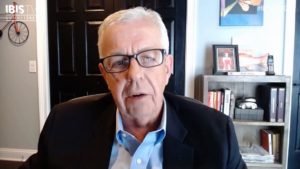 The rollout of virtual claims and artificial is a positive, but it comes up “a little short” on the repair of the vehicle, consultant Sean Carey recently warned the industry.

Carey, the president of SCG Management Consultants, suggested during a June 24 International Bodyshop Industry Symposium event and at a July 8 VeriFacts Guild 21 call that insurers should deploy the technology up to a certain point in a claim. Then, they should leave the vehicle repair estimating to a collision professional, he said during the Guild 21 call.

Stakeholders like OEMs, insurers and collision repairers should also collaborate now on virtual claims rather than find themselves stuck with a mess caused by siloed agenda-seeking, according to Carey.

“Which is great,” Carey said. “I’m all for technology.”

More than 60 percent of U.S. claims were handled virtually, he said. “I think that’s set to grow,” he said.

Carey discussed the scenario in the context of a consumer directed to take photos and images which could be transformed into an estimate.

“I think that’s great,” Carey said. It allowed insurers to handle more claims, and “I think it’s great for triage,” he said.

“It’s good to identify early total losses,” and the technology has antifraud benefits as well, he said.

But the tech is lacking when it comes to “repairing the vehicle,” Carey said. And there’s a risk if this isn’t addressed now rather than in the future, he said.

While the technology is replacing 30 years worth of claims and vehicle repair processes, “the friction points haven’t been resolved,” Carey said.

Insurers are trying to “trying to solve an engineering issue with an economic solution,” Carey said. “… That’s not going to work.”

Vehicle technology advances mean the repair process needs to be addressed “right up front,” he said. But virtual estimates don’t deliver that information, according to Carey.

Repair processes like calibration might be omitted, as could an increasing number of one-time-use parts — a trend which historical data used to educate artificial intelligence wouldn’t capture.

“We’re putting shops between a rock and a hard place,” Carey said.

The customer starts off “delighted” that photos can launch the claim, only to find a body shop reporting the customer’s estimate is deficient.

“The customer’s confused,” he said.

Virtual estimates identify what’s happening, Carey told the Guild 21 call July 8, but then they’re being used to assess cost. “They don’t belong in there,” he said. They have “no knowledge about that,” he said.

Insurers spend several billions settling claims in a process that’s inefficient and costly. A “near-term byproduct of AI” will be a significant cut in loss adjustment expenses, Carey said.

Using the technology for total loss detection and fraud prevention also delivers a “ton of gain” for insurers and significant reductions in cycle time, he said.

But insurers need to stop there — at which point a “fantastic service” has already been delivered — and say, “‘Now we need to hand over to people that know what a repair plan looks like.'”

Marrying the knowledge of both industries will produce the best result, he said.

Carey during his June IBIS appearance urged stakeholders to work together now, describing it as a short window which could lead to years of claims going smoothly or with friction.

“We have to find some common ground,” he said.

Otherwise, “my concern is that the insurtech and the insurers run off down this road holding hands into Utopia,” Carey joked, with repairers and automakers with the information for a correct repair left behind.

“That leaves the consumer in a terrible spot,” he said. They arrive at a body shop with an insufficient estimate, leading to multiple supplements.

In any collaboration, one item must be “nonnegotiable,” Carey said.

“This is a safe and proper repair,” Carey said. This must be a “North Star.”

The existing claims and collision repair process has “managed ourselves in to chaos” and inefficiency while “not caring enough about the one poor thing that’s at stake, and that’s the car and the safety of the vehicle occupants,” he said.

“Will AI and Virtual Claims build a bridge or widen the chasm?”