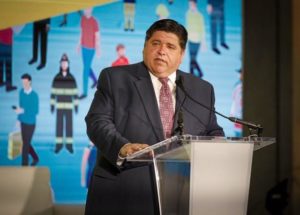 A list of complaints raised by dealership service departments in Illinois about their relationship with the car manufacturers when it comes to being paid for warranty work sounded as if they had been written by collision repair facilities describing how they struggle to be paid by insurance companies. The only difference: The state of Illinois just passed a new law to address the dealers’ issues.

Illinois Governor J.B. Pritzker on July 30 signed House Bill 3940 into law, requiring automakers to pay dealers the same labor rates and times for warranty work as the dealers are paid by retail customers for non-warranty work. The governor said it was a bill to “protect hardworking families” by ensuring that technicians at dealerships are “paid fairly for their skilled labor.”

“All work deserves fair compensation, and I’m proud that the bill I’m signing today ensures automobile mechanics are compensated fairly for the critical skilled labor they provide,” the Governor said in his announcement,

Supporters of the bill, including the Illinois Automobile Dealers Association, the Chicago Federation of Labor and the Illinois AFL-CIO, explained that, under existing law, manufacturers merely are required to provide “reasonable” compensation to dealerships for performing warranty work. Manufacturers then could calculate their own time allowance which dictates the compensation to the dealership.

“These time allowances tend to drastically underestimate the amount of time actually needed to complete the jobs,” the groups said in a fact-sheet.

To address this, HB 3940 requires manufacturers to pay “full compensation for diagnostic work, as well as repair service, labor, and parts” and that time allowances for the diagnosis and repair shall be “no less than charged to retail customers for the same work.”

As specified by the new law, a dealer’s retail labor rate shall be defined as “the same effective labor rate (using the 100 sequential repair orders chosen and submitted by the dealer less simple maintenance repair orders) that the dealer receives for customer-pay repairs.”

Interestingly, the bill also specifically provides that shops be paid fairly for the time it takes to research or obtain the proper technical repair information required to complete the job. The bill states, “if a technician is required to communicate with a Technical Assistance Center/Engineering/or some external manufacturer source in order to provide a warranty repair, the manufacturer shall pay for the time from start of communications (including hold time) until the communication is complete.”

Existing law only required manufacturers to compensate dealers at a rate that is “reasonable,” based on the “prevailing wage rate” in the “relevant market area.” Parts prices were also required to be based on the “prevailing retail price charged by that dealer” provided that the dealer’s price is not “unreasonable” when compared with others in the geographic area, presumably as determined solely by the manufacturer. But even with those requirements in place, the manufacturers were also free to draw up contracts with dealers that could require them to agree to lower parts prices and repair times for warranty work, essentially eliminating even the requirement to pay “reasonable” prices.

All of that language was removed in the new law that now requires rates to paid at the dealer’s normal retail rate, under the new definition, and states that, “there shall be no reduction in payments due to preestablished market norms or market averages.”

The law also allows for dealers to submit a request for warranty labor rate increases once per calendar year.

The measure had its detractors, however. The Chicagoland Chamber of Commerce opposed the bill. In a letter to the Governor urging him to veto the measure, the group’s President and CEO Lack Lavin said the bill, “requires auto manufacturers to pay car dealers far more than what is required to repair a vehicle, and would make Illinois the most costly and uncompetitive state in the nation for auto manufacturers on warranty-related issues.” He said the bill would cost manufacturers an additional $249 million per year in warranty repairs resulting in “higher prices for warranty services for consumers making car ownership a more expensive venture for low-and-middle income families.”

That argument might sound familiar to collision repairers. But supporters of the measure weren’t buying it.

“Technicians are receiving unjust pay for their hard work and expertise from manufacturers who are taking full advantage of them,” said State Senator Christopher Bel. “This is really a David and Goliath story. Technicians, especially in smaller shops, have little recourse if a major auto manufacturer decides to pay them poorly.”

The Chicago Automobile Trade Association also supported the bill. “A shortage of technicians at franchised dealers has been a problem for many years,” said David Sloan, the association’s president, “This new law will go a long way toward solving it.”

Lawmakers overwhelmingly agreed with the supporters. The bill, which takes effect on January 1, 2022, passed the Illinois Senate 85-24, and passed the House with no opposition, 58 to 0.

Interestingly, in the same week the Illinois bill was signed into law, two dealerships in Massachusetts filed a lawsuit against Volvo Cars USA, accusing the automaker of failing to pay them the “retail rate” for warranty work they perform, which the dealers say violates the state’s “Dealer Act.”

Chicagoland Chamber of Commerce letter to the Governor
https://www.chicagolandchamber.org/statements-releases/letter-to-the-governor-of-the-state-of-illinois-on-house-bill-3940/