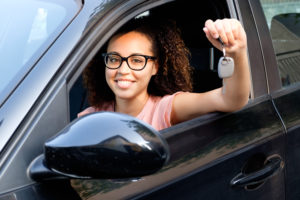 Crash avoidance features and teen-specific vehicle technologies could prevent or mitigate 41 percent of all crashes involving teen drivers, according to a new study published by the Insurance Institute for Highway Safety.

“We know these technologies don’t stop 100 percent of the crashes they’re designed to address, but our analysis shows that the potential benefits for teen drivers could be pretty stunning if they were widely used,” Alexandra Mueller, an IIHS research scientist and the lead author of the paper, said in a statement.

On a per-mile-driven basis, teen drivers are nearly four times as likely to crash as drivers 20 and older. Teen drivers are more prone to losing focus, and less likely to lower their speed to compensate for slick roads or poor visibility. They are also often involved in rear-end and right-angle crashes.

All that means that the safety benefits of crash avoidance technologies like front crash prevention and lane departure prevention could be particularly helpful for teen drivers.

“However, even at current levels of performance, existing crash avoidance technologies could prevent a lot of crashes if they were universally adopted,” the IIHS said.

Previous research has shown that lane departure warning, blind spot monitoring and automatic emergency braking reduce the types of crashes they’re designed to prevent by 11 percent, 14 percent and 50 percent, respectively. Based on those percentages, lane departure warning as it works now could prevent nearly 6,500 teen driver crashes a year, blind spot monitoring another 4,500, and auto-emergency braking a further 110,000.

One hurdle the study acknowledges: Many parents may not realize that their vehicles may be equipped with teen driver-specific technologies. Others may purposely decide not to use them. One IIHS study  of parents who owned MyKey-equipped Ford vehicles found that only a little over half knew their vehicles had the teen-oriented technology suite available. Even among those who knew the technology was there, about a third didn’t use it with their teens. Some said they didn’t think the technologies had any safety benefits.

“Lack of access and lack of acceptance are two major barriers preventing these technologies from delivering on their full potential,” Mueller said. “Manufacturers should include these features in more vehicles and do a better job of communicating the benefits to parents and teens.”