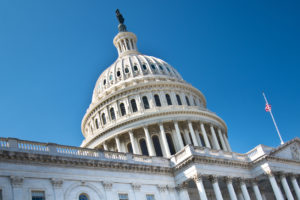 A coalition of 120 trade groups that includes the Society of Collision Repair Specialists (SCRS), the Specialty Equipment Market Association (SEMA) and the Auto Care Association (ACA), has signed on to a letter from the Main Street Employers Coalition opposing what it says could be as much as $1.75 trillion in new federal tax increases in a budget resolution approved by the Senate on Sept. 8. The tax package is part of a $3.5 trillion spending plan under consideration in Congress that would fund climate initiatives, paid leave, child care, education and health care.

“The Main Street Employers coalition strongly opposes the Senate budget resolution released today. The resolution calls for $1.75 trillion or more in higher taxes in the coming years. These tax hikes represent a triple threat to Main Street businesses still struggling to recover from the pandemic – they hit employers when they earn profits, when they sell their business, and when they try to pass it on to their children,” Chris Smith, Executive Director of the Main Street Employers Coalition, said in the one-page letter dated Sept. 8.

“Voters — 2 to 1 — oppose these tax increases because they understand that the higher taxes will be passed on to American workers in the form of higher prices, fewer jobs, and lower wages. The Biden tax plan represents one of the most anti-Main Street plans ever proposed, and this budget resolution brings the Biden tax plan one step closer to becoming law. That’s bad news for Main Street and the millions of Americans who work there,” Smith said.

The letter is addressed to U.S. Rep. Richard E. Neal, the chair of the House Ways and Means Committee, which now takes up the budget resolution approved by the Senate in a 50-49 vote, along party lines.

Analysts are already predicting that the spending plan could be pared back significantly during negotiations over the coming weeks. The Associated Press reported on the morning of Sept. 9:

The leaders seemed to suggest what many lawmakers and analysts have long predicted and progressives fear — satisfying moderates may well require shrinking the measure, perhaps by hundreds of billions of dollars. They spoke as 13 House committees have begun writing pieces of the bill, an initial step leaders hope to complete by next week.

Bernie Sanders, I-Vt., chair of the Senate Budget Committee, has described the budget resolution as a compromise from his initial $6 trillion plan, while moderates, led by West Virginia’s Joe Manchin, are seeking a bill significantly smaller than $3.5 trillion. Republicans have been unified in opposition to the bill, which means the Democratic House caucus can afford to lose no more than three votes.

Biden has maintained that his policies are focused on shifting more economic power to workers and away from businesses. He said core elements of his agenda, such as the expanded child tax credit, would reduce taxes for millions of U.S. households.

In a Sept. 9 statement, Neal noted that the federal government’s economic supports during the pandemic had served to “keep small businesses afloat.”

“Over the coming days, we will consider recommendations that make smart investments to protect Americans’ health and to strengthen our economy in a way that grows the labor force, empowers working families, and tackles the worsening climate crisis. We have a once-in-a-generation chance to make transformative, beneficial change,” Neal said.

According to Alex Ford, Executive Director of the S Corporation Association, one of the 120 signatories, the coalition’s objections to the tax provisions of the bill center on three areas: Changes to taxes on income earned by individually- and family-owned companies; an increase in the top capital gains rate to 43.4% on taxpayers with income over $1 million; and an imposition of higher taxes on a broader income base.

Ford said the Main Street Employers Coalition is concerned that proposals from Congress and the Biden administration would increase the top individual / pass-through tax rate from 37% to 39.6%, lower the threshold above which that rate applies, and greatly expand the application of the 3.8% Net Investment Income Tax (NIIT) and Self Employment Tax (SECA), in addition to the proposed repeal of the 20% deduction over certain income levels provided under Section 199A.

“Add it all up and a business currently receiving the Section 199A deduction could see their top rate go from 29.6 percent to 43.4 percent; that’s a 13.8 percentage point increase, much higher than anything that’s being proposed for corporations, and a level that’s completely unsustainable for many of these companies,” Ford told RDN.

The Section 199A deduction, also known as the Qualified Business Income deduction, arises from the Tax Cuts and Jobs Act of 2017.  This deduction allows non-corporate taxpayers to deduct up to 20% of their qualified business income (QBI), plus up to 20% of qualified real estate investment trust (REIT) dividends and qualified publicly traded partnership (PTP) income.

The S-Corporation Association maintains that eliminating the Section 199A deduction would raise taxes for up to one million pass-through employers, endanger up to 28 million jobs, and force large pass-throughs to pay rates 12 percent higher than the average C corporation.

“Coupled with the other rate hikes under consideration, including the higher corporate rate, between 2 to 3 million Main Street employers will be harmed, putting more than 40 million jobs at risk,” the S-Corporation Association states on its website.

According to the Internal Revenue Service, “A corporation generally takes the same deductions as a sole proprietorship to figure its taxable income. A corporation can also take special deductions. For federal income tax purposes, a C corporation is recognized as a separate taxpaying entity. A corporation conducts business, realizes net income or loss, pays taxes and distributes profits to shareholders.” An S corporation, in contrast, generally is not taxed separately.

The tax plan also calls for increasing the top capital gains rate from 23.8% to 43.4% on taxpayers with income over $1 million, or $2 million for couples. “That may sound like a high threshold, but would capture many small firm owners who are pushed into the highest bracket due to the one-time sale of their business (to fund their retirement, for example),” Ford said. “And for owners wishing to pass on their business to the next generation, the Biden proposal for repealing stepped-up basis and taxing unrealized gains at death is highly problematic.

“If enacted, we suspect many heirs would have no choice but to sell the business just to cover the sizeable tax bill, making it even harder for family-owned companies to survive from one generation to the next,” he said.

The increase in the capital gains tax, which would raise an estimated $19 billion over 10 years, would not affect the estate tax. Estates worth less than $11.7 million will continue to be untaxed.

The U.S. Chamber of Commerce, in a report titled “Impact on Jobs, Tax Revenue, and Economic Growth of Proposed Tax Increase on Carried Interest,” said the tax increase would reduce investment, lead to job losses, and decrease tax revenues at the local, state, and federal levels.

“New carried interest taxes would harm the innovators who are leading America out of the pandemic and the main street businesses that are fueling the economic recovery,” Tom Quaadman, executive vice president of the U.S. Chamber Center for Capital Markets Competitiveness, said.

The report estimates that the proposed capital gains increase could result in 4.9 million job losses within five years and annual net revenue tax losses of $96 billion over the same period. It also estimates that pension funds would lose up to $3 billion a year.

“Many assume that only big businesses will pay this higher rate. That couldn’t be farther from the truth,” Curtis Dubay, a Senior Economist with the U.S Chamber of Commerce, wrote in an April 30, 2021 post on the Chamber’s website. “In fact, over a million small businesses — those ‘Mom-and-Pop’ retailers, small manufacturers, and professional services firms that often suffered the worst during the pandemic — would also see their tax bills increase significantly. In turn, this would have a negative impact on small businesses’ investment and growth plans and, most critically, hiring and job creation.”

Broadening the tax base

Finally, Ford said the Main Street Employers Coalition is concerned that more limits on deductions will be imposed. “We saw a number of base-broadening provisions enacted as part of the 2017 tax bill (e.g. Section 163(j) cap on interest deductibility, and the $10,000 cap on state and local tax deduction, just to name a few), and the Biden plan seeks to expand that list even further,” he said.

Section 163(j) applies to all taxpayers who have business interest expense, other than certain small businesses that meet a gross receipts test. Some trades and businesses are exempted from the limitation.

The $10,000 cap on state and local tax deductions, commonly known as SALT, went into effect in 2018. According to the non-profit Tax Foundation, “The value of the SALT deduction as a percentage of adjusted gross income (AGI) tends to increase with a taxpayer’s income. Since the SALT cap was put into place, however, very high earners have seen a sharp reduction in the deduction as a percent of AGI, from 7.7 percent in 2016 for those earning over $500,000 to 0.71 percent in 2018. The value dropped so significantly because the deduction remains at a maximum value of $10,000 even if AGI and state and local taxes rise beyond that amount,” the Tax Foundation said.

About the Main Street Employers Coalition

The Main Street Employers Coalition is comprised of national trade groups representing individually- and family-owned businesses, whose members employ millions of private sector workers in every community and every industry, including contractors, engineers, retailers, manufacturers and more.

The coalition’s Steering Committee is made up of these eleven national business groups: