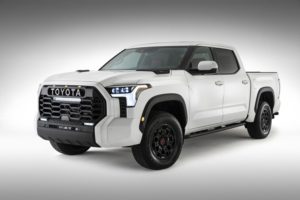 Toyota on Sunday revealed its all-new 2022 Tundra, which incorporates a new high-strength, boxed, steel-ladder frame, an aluminum-reinforced composite pickup bed and a fully redesigned multi-link rear suspension in its design.

“High-strength steel is employed throughout the chassis to increase rigidity considerably over the previous generation, while aluminum is used in key areas to help reduce weight,” Toyota said. “Frame crossmembers are more than doubled in size to provide additional reinforcement and rigidity. A new front cross member was constructed for the steering gear box, which adds rigidity via additional cross member support while enhancing steering input for the driver and handling dynamics.”

“The truck bed is lightweight and extremely strong thanks to the new Sheet-Molded Compound (SMC) construction and the use of reinforcing aluminum cross members in the bed. The new SMC bed offers added protection against dents, impact dings and rust compared to traditional steel decks. Even the tailgate uses lightweight construction techniques to reduce weight by 20% compared to the outgoing model. Speaking of the tailgate, one of the coolest features is the tailgate release on the key fob that is standard on all models,” the automaker said.

Toyota noted that the rear frame member was widened to improve the vehicle’s stability and towing capacity, while also improving ride comfort. On grades above the basic Limited, the Tundra features hydraulic cab mounts for added occupant comfort. 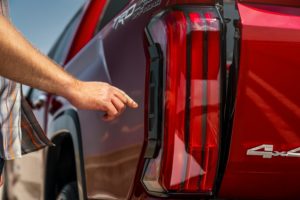 On TRD Pro or vehicles with the TRD Off-Road package added, an available “Multi-Terrain Monitor” will let the driver check the immediate surroundings for obstacles by pushing a button for front-, rear- and side-camera views. A “Panoramic View Monitor” will use cameras to display a top-down view of the truck, of particular interest to those towing a trailer.

A panoramic roof is included among the interior options, as are heated and ventilated front seats, a rear sunshade, a heated steering wheel and more.

Offered as standard equipment on all Tundra grades will be Toyota Safety Sense 2.5, a package of active safety features. These include:

All Tundras will also be equipped with Toyota’s Blind Spot Monitor (BSM), which is designed to warn of vehicles approaching or positioned in the adjacent lanes. Rear Cross Traffic Alert (RCTA) detects vehicles approaching from either side while the truck is backing out. The available Parking Support Brake is designed to apply brake control to avoid a collision with a stationary object or approaching vehicle, or while parking.

Not included in Toyota’s announcement was any mention of the new trucks’ headlights. The previous generation Tundra earned a Good rating from the Insurance Institute for Highway Safety for its LED reflector headlights, offered on high-end TRD models, and a Marginal rating for all others, which used a combination of halogen projector low beams, and halogen reflector high beams.

The Tundra will be offered with two different four-door layouts, as well as a variety of bed lengths that include a 5.5-foot bed, a 6.5-foot bed and an 8.1-foot bed. 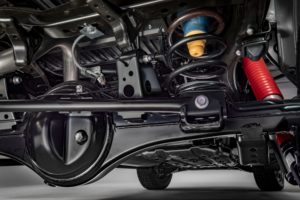 Like the prior generation Tundra, the new truck will be assembled at Toyota Motor Manufacturing Texas (TMMTX) in San Antonio. It will go on sale later this year, Toyota said, with pricing to be announced closer to the on-sale date.

Two powerplant configurations will be offered: a new, twin-turbo 3.5-liter V6 that makes up to 389 horsepower and 479 lb-ft. of torque; and that engine paired with a bellhousing electric motor system called the i-FORCE MAX, to give a combined output of 437 horsepower and 583 lb.-ft. of torque. Both configurations will be mated to a new 10-speed automatic transmission.

Research and development for this truck was conducted at Toyota Technical Centers in Michigan, Arizona and California. The goals for the chassis engineers, Toyota said, included improved capability and ride comfort. The solution included moving to a fully boxed frame, which the automaker said improved rigidity significantly compared to the current generation.

The tailgate of the 2022 Toyota Tundra weighs 20% less than the preceding model’s, thanks to innovative construction techniques, Toyota said. (Toyota Motor Sales, USA)