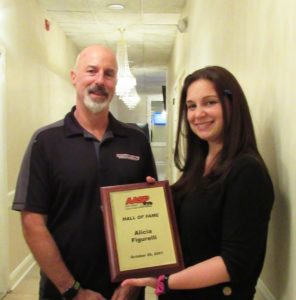 Alicia Figurelli, senior vice president of Thomas Greco Publishing, has been inducted into the Hall of Fame of the Alliance of Auto Service Providers of New Jersey (AASP/NJ), the organization has announced. Figurelli becomes only the second woman to achieve this honor.

The announcement was made during the association’s annual meeting, held on Oct. 20 at Gran Centurions in Clark, N.J.

“I was completely taken by surprise when Jeff [McDowell, past president of AASP/NJ] called out my name,” Figurelli said in a news release. “I’ve loved my time working with and for AASP/NJ over the years, and I never expected recognition like this. I’m humbled to be included in the company of such an elite group of professionals, many of whom I’m also proud to call my friends. It’s an amazing honor.”

“There is no person that I’ve interacted with in this association who has dedicated their life any more intently than Alicia,” McDowell said in his award presentation. “When I was president, she was my go-to person – she made all the wheels turn. And she still does. Alicia is the energy behind the association.”

The AASP/NJ Hall of Fame was introduced in the early 1990s to celebrate those who had made significant contributions to the association’s growth and success. Former Executive Director Cindy Tursi became the first woman inducted into the Hall of Fame two decades ago. Figurelli became the 36th individual to be honored.

“Alicia has spent the last two decades going far above and beyond her duties for AASP/NJ,” said Thomas Greco, AASP/NJ secretary and president of Thomas Greco Publishing. “Over that time, there hasn’t been a meeting or a function she has missed, always lending a helping hand and making sure things get done. Whether it’s our meetings, our functions or the NORTHEAST Automotive Services Show, she has been a crucial part of our association’s success for close to 20 years.”

For further coverage of the AASP/NJ Annual Meeting, see the December 2021 issue of New Jersey Automotive, which will be available at grecopublishing.com.

Featured image: Alicia Figurelli holds her Hall of Fame plaque. With her is Jerry McNee, president of the AASP/NJ board of directors. (Provided by the Alliance of Auto Service Providers of New Jersey)