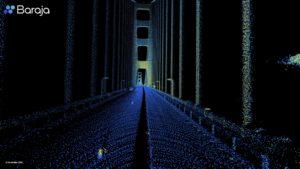 Lidar is on its way to widespread adoption by OEMs as a crucial part of the technology behind self-driving vehicles, but one obstacle to its performance is something as simple as car buyers’ color preferences, specialists in the developing field said during a Collision Industry Conference (CIC) presentation on Tuesday.

As lidar takes its place augmenting the two established technologies, radar and cameras, repairers will be presented with new considerations, and new opportunities, presenters said.

Cibby Pulikkaseril, chief technology officer and co-founder of lidar firm Baraja, said that lidar will be appearing on more and more vehicles because it performs in ways that the other two widely used technologies, cameras and radar, cannot.

“What you’re seeing is now the increasing adoption of lidar as another redundant method of sensing that gives the car an even greater sense of what’s around it. So this is why it’s a hot topic, and why there’s so many companies competing in this space,” Pulikkaseril said.

Moderator Aaron Schulenburg, executive director of the Society of Collision Repair Specialists (SCRS) and chair of the CIC’s Parts and Materials committee, noted that vehicles equipped with lidar are only now beginning to appear on North American roadways.

“And so it required us to dig pretty deep,” he said. “And so I’m really excited to share with you what we’ve identified, and a bit about this emerging technology because I think it’s something we’re going to see soon … it’s just around the corner.”

Though lidar units are expensive, limiting their use, Pulikkaseril said Baraja is aiming at “a couple of hundred dollars” as a price point, which he said could be possible through high-volume production.

Currently, in the U.S., Lucid is the only automaker to offer lidar-equipped vehicles to the public, Schulenburg said. General Motors has said it will use the technology in its UltraDrive system, to be offered on as-yet unidentified Cadillac models, while Volvo has said it will equip its XC90 replacement with lidar units.

Pulikkaseril explained that lidar, which he called “laser eyes for autonomous vehicles,” stands for “light detection and ranging.” Lidar works by firing a beam of laser light at an object, and then capturing the reflection of that beam. “By knowing the time it took for that laser to hit the object and return, we can capture then a very precise measurement to the object,” he explained. 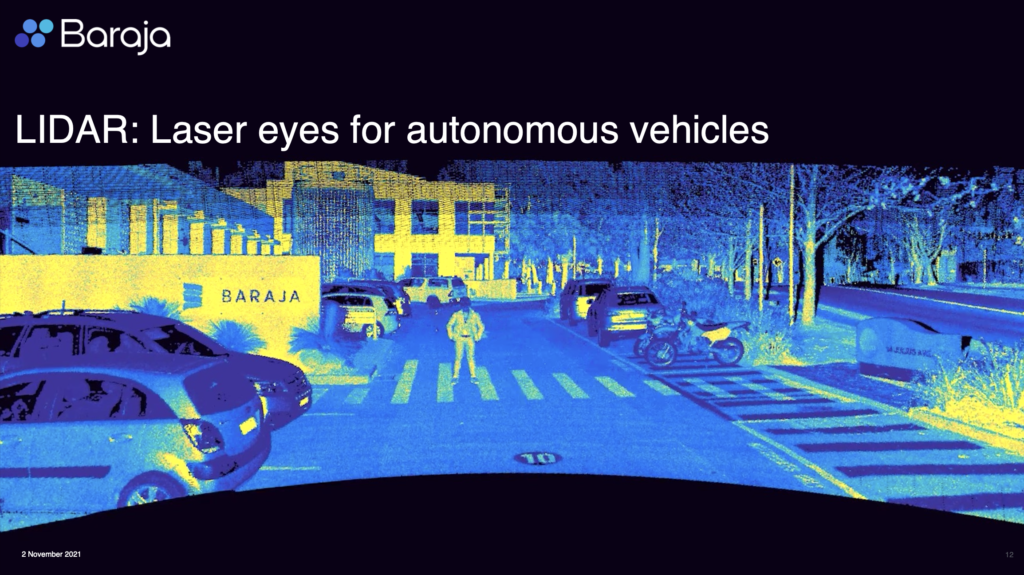 The “point cloud” provided by lidar represents a 3-D map of what lies in the unit’s line of sight. “So we’ve just presented this flat, like a picture,” Pulikkaseril said, referencing an image made outside the company’s Sydney, Australia, headquarters (shown above). “But each one of these points in here is an individual measurement that has been taken directly to that object as we get a true measure of distance. And so that is why lidar is really an exciting technology and crucial for autonomous vehicles … because it’s taking a true measurement of distance.”

How does lidar compare with cameras and radar? “That’s one of the key questions, and one that is really often described in the industry but never clarified,” Pulikkaseril acknowledged. 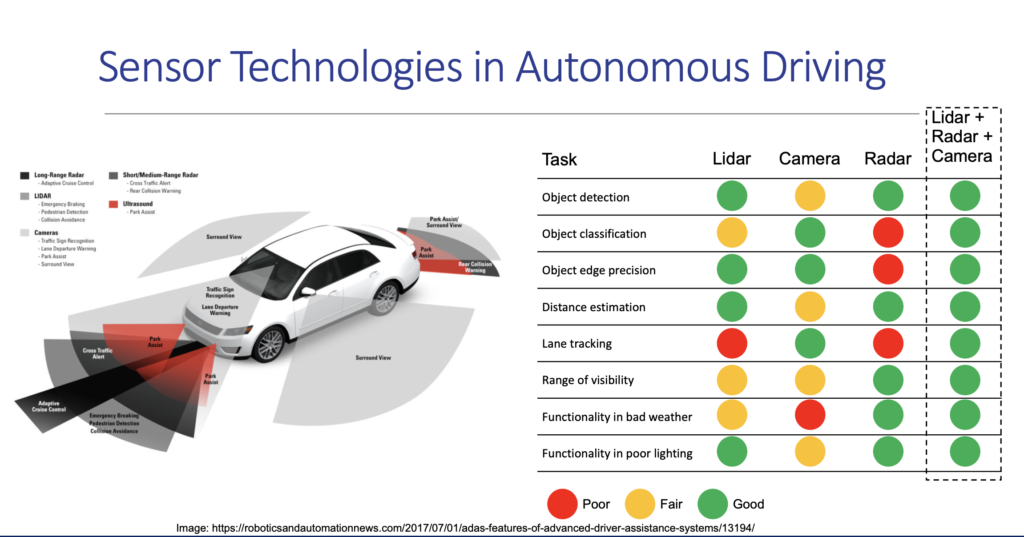 Cameras, which are relatively inexpensive and can be produced in the sort of high volumes that automotive production requires, are valuable for the high-resolution, full-color images they provide. “If you have enough resolution and if you have the right lighting conditions, you can see things that are really far away,” he said.

Its drawbacks, he said, are difficulties in dealing with poor weather, and its inability to provide a true distance measurement to an obstacle. Applications that use two cameras to provide a stereo effect are not a solution, because “your errors grow quadratically over a range. So the further away you want to see, the harder and harder it gets to estimate the distance to an object.”

As a demonstration of the limitations of cameras, he presented a June 1, 2020 video of a Tesla Model 3 crashing into an overturned truck on a freeway in Taiwan. The vehicles “haven’t been trained for a truck lying down on the road…. Relying on just cameras was not able to detect that hazard.” (The driver was reportedly uninjured.) In often-repeated remarks, Tesla CEO Elon Musk has dismissed lidar as “expensive” and “unnecessary.”

Radar is similar to lidar, but uses radio waves rather than light. “You get a true measure of distance, which is one of the advantages, and it performs really well in weather, so it can see through fog and see through dust. So it is a crucial sensor for any autonomous vehicle,” Pulikkaseril said.

Radar’s drawbacks are that it provides poor resolution and poor accuracy.

As lidar joins radar and cameras as part of vehicles’ advanced driver assistance systems, or ADAS, calibrating the systems when vehicles come in for repair will be necessary. Pulikkaseril said Baraja is doing its own calibration now, and predicted that the systems on production vehicles will have “a self-calibration routine that can be run.”

“The real challenge, I think is the calibration of the lidar to the camera,” he said. “That I think is a pretty fine operation, and at the OEM level I think they have to establish what that method is going to be. Errors there will result in errors in the perception ability of the vehicle.”

Pulikkaseril said development is making lidar units smaller and better suited to automotive use. The first lidar units needed to rotate to get a full scan around a vehicle, and were contained in a bucket-shaped enclosure on a vehicle’s roof.

These evolved to units that use spinning or oscillating mirrors. These can be enclosed and built into a vehicle’s design, but their moving parts may make them unreliable in the sort of extreme environment that automotive use presents, he said.

Baraja’s patented Spectrum-Scan technology uses no moving parts, Pulikkaseril said. Instead, it uses wavelength-tunable infrared lasers to scan the environment, much as a prism breaks down visible light into its component colors, each with its own, unique angle. 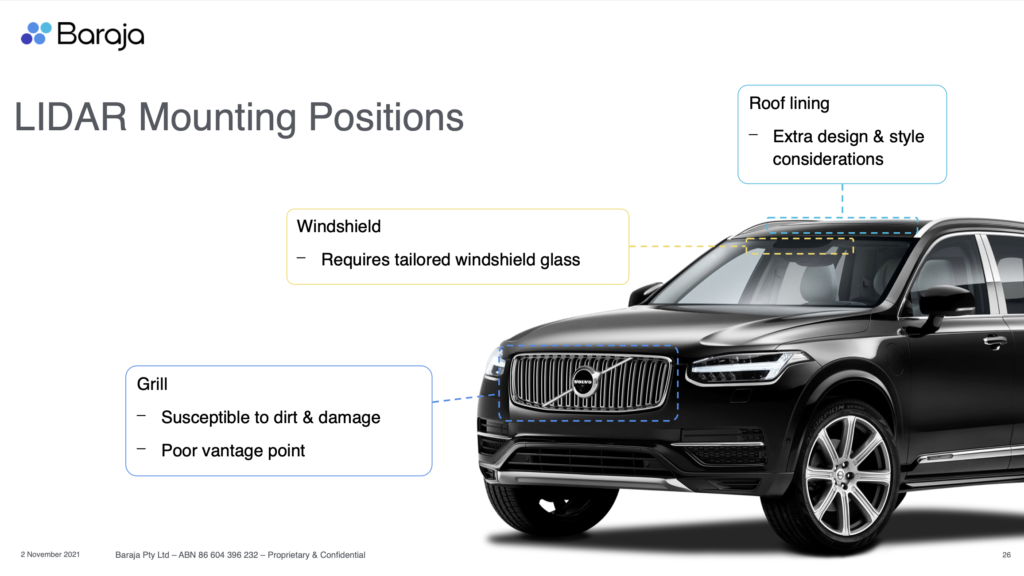 As lidar units become more compact, OEMs are presented with different options for mounting positions. Behind a windshield might be a good choice, Pulikkaseril said, because it provides a good vantage point, and its vision can be kept clean.

Roof-mounted units present styling challenges, and grille-mounted units have a low vantage point and are more susceptible to dirt and damage.

A major consideration in the behind-the-windshield application is the type of glass used; typical laminated glass blocks infrared laser light, and so specially designed glass must be used. One Tier 1 supplier, AGC, is developing glass called Wideye that is optically transparent in the visible and infrared spectrum.

If a repairer had to replace a windshield in a vehicle with behind-the-glass lidar, it would be crucial to use the windshield designed and manufactured for that application, he noted.

“It’s similar to a camera, in that you don’t want anything to obscure the field of view,” he said. “These windshields have to be designed for lighter transmissivity, so you would not be able to just replace it with any other windshield, you’d have to get the actual specified one,” he said.

Though lidar’s prospects are bright, the technology does face a challenge: Black paint. Black vehicles are popular with buyers, but they’re very difficult for lidar to detect, Pulikkaseril said. “It’s a huge problem.”

It’s also a problem that BASF has recognized and has been working to solve, said panelist Daniel Ferris, a scientist with the corporation’s OEM Coatings division. 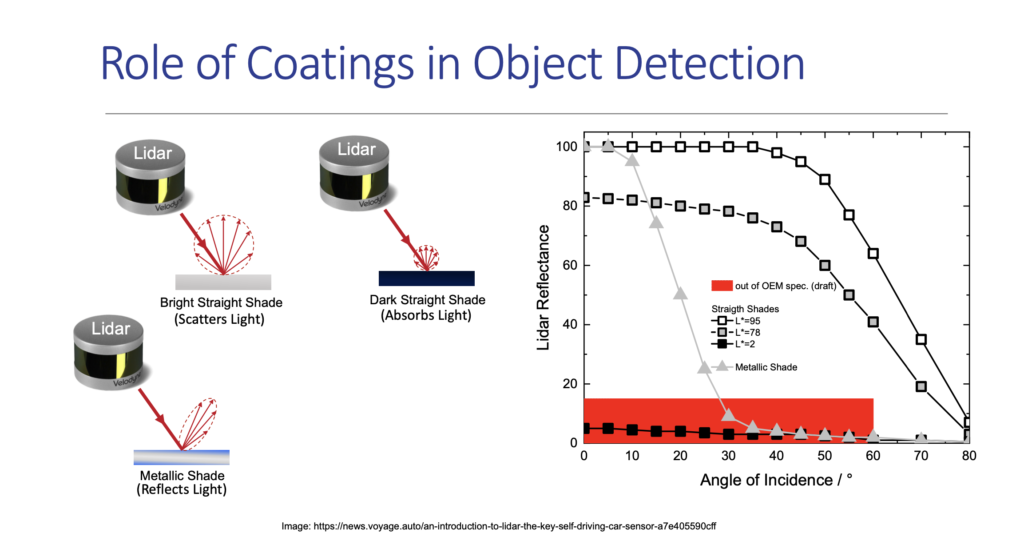 Dark colors are good at absorbing laser light, allowing too little to return to the lidar unit for an accurate reading, Ferris said.

“We’ve discovered there’s many materials out there that although they’re not necessarily black, most of them are dark in color, but they too can also absorb the the laser light,” he said. “And so you get a either an undefined distance where it can come back to the devices being further away than then you would expect it to be or that you just don’t see the object at all.”

The culprit is a material called carbon black, an extremely common ingredient in paint mixtures. “The issue is is it doesn’t take very much black color mixed into your paint for it to decrease the sensitivity to the target,” he said, “where even concentrations greater than 1 percent mixing in this black color can actually start to cause interference in the lidar. Black is used ubiquitously in the paint industry, in this carbonaceous material, so how do we solve this problem?”

BASF is working on two possible solutions, Ferris said. One is its research into materials called “organic black” that absorb visible light, but reflect infrared light. While “your eye detects them as being a nice shade of black,” they return 80 to 90 percent of lidar’s signal. 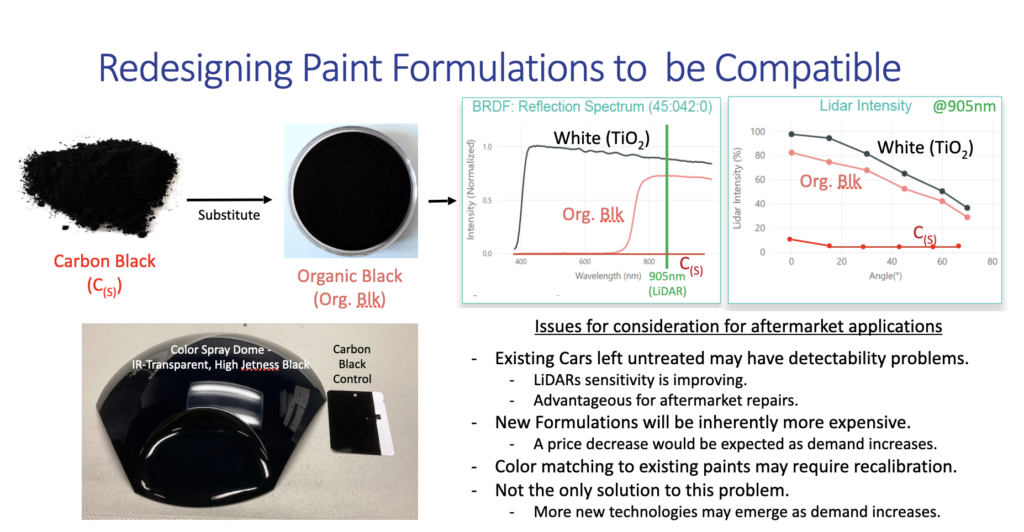 To demonstrate, he showed two videos of a lidar-guided robot vacuum cleaner navigating around a black-painted object. In the first video, where carbon black has been used as the pigment, the robot bumped into the object, backed up, changed direction slightly and bumped into it again. While this “might be really good for the refinish business,” he quipped, “we really don’t want to see that on the technical side.”

The second video, a test of paint that uses a different pigment, shows the robot vacuum stopping and changing course before it hits the object.

This has application not just for new cars, but for those already on the road, Ferris noted.

“It’s going to be generations before all of these vehicles that have a carbon black paint are off the road,” he said. “I mean, is there something that we can do to identify these vehicles? Is there a solution for that, or do we just have to wait for generations?”

“This could actually be advantageous for aftermarket repairs, such as if you repaired a car and color matched it to an existing car that had paint that was not efficient at reflecting lidar. You could put a new paint on the repair area. And it would help the lidar actually detect the distance to that target which would increase its safety value,” Ferris said.

He said BASF has experimented with lidar-visible coatings that are visually indistinguishable from those that use carbon black. And, while these new pigments are more expensive than carbon black, their cost will undoubtedly come down as they become more widely used, he said.

Noting the countless customized vehicles on display at the SEMA Show, Schulenburg asked about lidar’s ability to detect matte finishes, or vehicle wraps.

“My experience is that matte is actually really good for lidar,” Pulikkaseril responded.

Ferris agreed. “Essentially, the reflected signal is really what we’re looking at, and how it reflects off the surface,” he said. “With ones that give more scattering, say you’ve got a matte finish, you essentially pick up a huge  amount of scattering, so your angle dependency goes away.”

BASF has yet to test wrap finishes, he added. “It really boils down to how well the material will reflect at any given angle, and so it’s less about the color, and more about the surface that the lidar is hitting,” he said.

Featured image: The Golden Gate Bridge, as captured by a Baraja lidar unit. (Provided by Baraja)

An image made by a Baraja lidar unit outside the company’s Sydney, Australia, headquarters. (Provided by Baraja)

Lidar, radar and cameras are seen as complementary technologies, working best in conjunction with one another. (Provided by Baraja)

As lidar units become smaller and more robust, OEMs have greater flexibility in designing them into vehicles. (Provided by Baraja)

BASF research shows that white paint is best for reflecting the infrared laser light emitted by a lidar unit, and that black is poorest. (Provided by BASF)

BASF research shows that substituting an “organic black” for carbon black as a pigment can make coatings much more visible to lidar. (Provided by BASF)