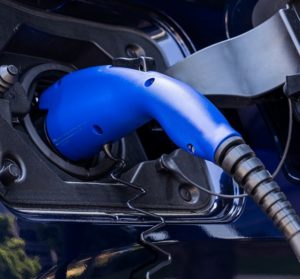 Insurers pay for recharging an electric vehicle (EV) less than a third of the time, and continue to pay for pre- and post-repair scans more than 80% of the time, according to results of a fall “Who Pays for What?” survey of more than 600 collision repairers.

This was the first time the vehicle charging question had been included in one of the quarterly surveys, conducted by Mike Anderson of Collision Advice in conjunction with CRASH Network.

The latest quarterly “Who Pays for What?” survey, focusing on “not-included” refinish labor operations, is now open through the month of January. Read on for details of how you can help the industry by participating.

Perhaps indicating the limited market penetration of EVs to date, roughly 75% of respondents said they had never sought payment for recharging an EV’s battery pack.

According to queries submitted through the Database Enhancement Gateway (DEG), charging an electric vehicle is a not-included operation in the P-pages of CCC, Mitchell and Audatex.

Although EVs make up only a fraction of the vehicles on U.S. roadways, “I expect to see this grow in the future as electric vehicles become increasingly common,” Anderson said. General Motors, for instance, is standing by its target of having EVs account for the majority of its sales by 2035, while Toyota and Volkswagen have recently laid out plans to invest a total of $170 billion on EV development.

The survey found that, among the eight major insurers included, USAA was most likely to pay for the operation at least some of the time. The rest were reported to “never” pay 48% to 55% of the time, showing a degree of consistency across the industry.

Shops that are members of insurers direct repair programs (DRPs) generally were paid more often than those that are not, according to the survey. Progressive was the outlier, saying no to DRP shops 66.7% of the time, and non-DRPs 44.9% of the time — though the numbers may be too small to be statistically significant. 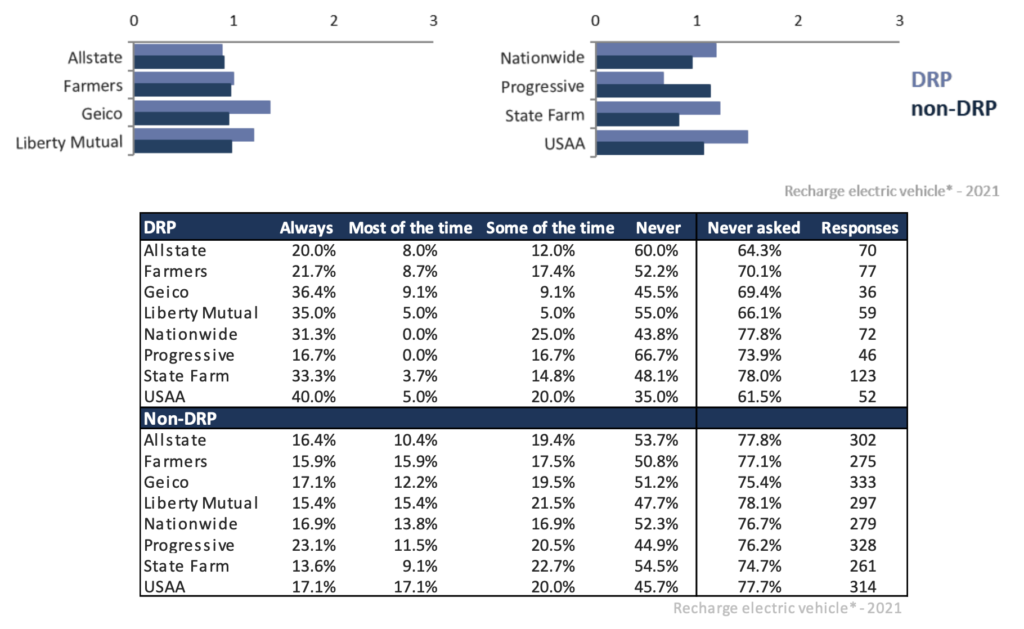 In his commentary, Anderson noted, “Another labor operation that may be needed is to drive a vehicle sufficiently to reduce the battery charge prior to painting. Some OEMs say the battery cannot be above a 20 percent charge during refinishing.”

He also pointed out that several companies, such as ClipperCreek, are now marketing charging stations that have the ability to produce a receipt, similar to a gasoline pump.

The survey also revealed that payment for pre- and post-repair scans continues to be widely accepted across the industry. The good news is that more than 80 percent of repairers were paid for these operations “always” or “most of the time.” Less good, Anderson said, is that the number is still below 100%.

OEMs routinely require scans both before and after repair. This, for example, is Honda’s position statement on scanning:

Any repair that requires disconnection of electrical components in order to perform the repair will require a post-repair diagnostic scan to confirm if the component is reconnected properly and functioning.

Some safety and driver assistive systems will require inspections, calibration, and/or aiming after collision or other body repairs. See page 2 for additional information.

*A collision is defined as damage that exceeds minor outer panel cosmetic distortion.

The survey found insurers slightly less willing to pay for pre-repair scans than post-repair scans. State Farm was most resistant of the eight insurers included, followed by Geico. It’s interesting to note that the overwhelming majority of repairers have asked for payment for the procedure, with “never asked” reported 1% of the time or less.

Even fewer repairers — 0.8 percent or less — reported never asking for payment for post-repair scans. Again, State Farm lagged the field in willingness to pay for the procedure, followed by Geico.

“This is different from some of the other procedures where a significant percentage of shops aren’t getting paid because they’re not seeking to be paid,” Anderson said in his commentary. “In this case, when shops aren’t being paid, it’s generally because of friction from the insurance carriers. But also remember that an insurer refusing to pay for a post-repair scan does not remove your shop’s liability for not conducting a scan.”

Anderson noted that not every malfunctioning component of a vehicle will set a dash light, and that some functions require a certain number of key cycles before a light is triggered, making scanning an important step in the safe and proper repair of a vehicle.

“There is no dash warning light, for example, that tells you the Bluetooth feature isn’t working. There may be no dash light for blind-spot monitoring or adaptive cruise control. So, I look forward to the day when post-repair scans are being paid 100 percent,” he wrote.

CRASH Network also called attention to the findings of an earlier “Who Pays?” survey, which found that the percentage of U.S. shops saying they are paid an administrative fee related to the processing of total losses has risen steadily over the past several years.

In 2021, 72% of shops said they are paid always, or most of the time, when they bill for this work. When the “Who Pays for What?” surveys began in 2015, just 46% said they were regularly paid a total loss administrative fee when they invoiced for it.

The survey also found that the percentage of shops that say they have never billed for this fee has declined steadily, falling from 30% in 2015 to just 11% in 2021.

“Processing a total loss has become more complex than it used to be,” Anderson said. “It can involve more tear-down, more research of OEM procedures, vehicle scans and more.”

According to the 2021 survey, 74 percent of shops itemize charges (as opposed to charging a flat fee) for total loss processing. In addition to the administrative time, these charges may include moving a non-drivable vehicle, covering the vehicle to protect it from weather, etc.

Back in 2015, 38% of shops said they believed that the top eight largest insurers in the survey “never” paid an administrative fee for total losses. In 2011, only 17% percent still thought so.

The latest quarterly “Who Pays for What?” survey is now open through the month of January. It focuses on “not-included” refinish labor operations. Shops can take the survey at https://www.surveymonkey.com/r/YDTT8NN.

Survey participants receive a free report with complete survey findings along with analysis and resources to help shops better understand and use the information presented.

Anderson said the survey, which will take about 15 minutes, can be completed by anyone in a shop familiar with the shop’s billing practices and the payment practices of at least some of the largest national insurers. Each shop’s individual responses are held in the strictest confidence; only aggregated data is released.

The results of previous surveys are also available online at https://www.crashnetwork.com/collisionadvice.

Graphs and tables provided by CRASH Network and Collision Advice.

Tagged with: payment survey Who Pays for What