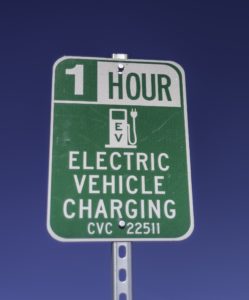 Bills have been introduced in several states regarding electric vehicle (EV) regulation and charging infrastructure – some aimed at determining if businesses can profit from charging stations.

The U.S. departments of Transportation and Energy announced last week a program under President Joe Biden’s 2021 infrastructure law that will provide nearly $5 billion to build a national EV charging network. To get its piece of the pie, every state is required to submit an EV Infrastructure Deployment Plan to the new Joint Office of Energy and Transportation that describes how the state intends to use its share of the program funds. Meanwhile, Wisconsin, Florida, and Massachusetts are considering bills to encourage private ownership and operation of EV stations for profit.

The Wisconsin Senate bill, and its companion in the House, would allow “a person” – as well as state agencies and local government entities under a separate owner — to charge users parked near or connected to the EV charging stations they operate a flat fee or base the cost on the amount of time spent there or the electricity used. That could be great news for collision repair shops that want to make some extra money by allowing public use of their EV charging stations. And for those that don’t have charging stations at their shops, there may come a time in the future with the growth of the EV market to invest in having them installed. The cost of installing a business EV charging station varies between $5,000 and $50,000 per station for the charger as well as construction and electrical work, according to WattLogic.

In addition to the idea that shops could curb long lines during peak charging times by offering retail charging, it could also be a free incentive to offer to customers to encourage end-of-week drop-off versus Monday drop-off. However, be mindful that producing a fast charge means a lot of electricity and a high cost.

Florida House Bill 737, and its companion bill in the Senate, in part, requires the Public Service Commission to adopt rules for an electric vehicle transportation electrification plan that “facilitates the deployment of electric vehicle charging infrastructure in a competitively neutral manner” and encourages incentivized private investment and ownership of EV charging stations. It would prohibit investor-owned electric utilities from using rate-based investment in the ownership and operation of new EV stations thereby putting a limit on how much money the public utilities could make off the stations.

Of the five bills related to EVs that have been introduced during the current legislative session in Massachusetts, two relate to charging station ownership. House Bill 3425 allows for private installation and ownership of EV charging stations, while Senate Bill 2192 would have the state’s Department of Transportation install and maintain EV charging stations at all service plazas for public use.