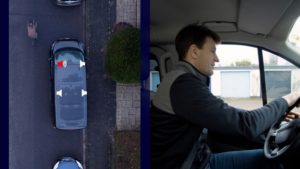 Engineers are exploring the use of in-car audio to clearly convey the location of the people or objects with directional audio alerts, such as footsteps, bicycle bells, or the sound of passing cars, rather than a single tone.

“Today’s warning tones already inform drivers when they need to take care and be vigilant. Tomorrow’s technology could alert us to both exactly what the hazard is and where it is coming from,” said Ford SYNC software engineer Oliver Kirstein.

Ford cautions that driver-assist features are “supplemental to and do not replace the driver’s attention, judgment, and need to control the vehicle.”

Ford spokesperson Monika Wagener told Repairer Driven News that corner radar sensors, like those used for BlindSpot Detection and CrossTrafficAlert, are used to locate the obstacle. “Based on its location (x,y) relative to the driver, it will be decided which speakers are used for the warning sound,” she said. Software developed by Ford uses information from the sensors to make that decision as well as what sound will be played.

Therefore, calibrations and testing of the sensors during collision repair would be the same as those used for those features.

Wagener declined to comment on when the feature could be added on new Ford vehicles.

Ford vehicles currently have driver assistance technologies that use a suite of sensors to identify when pedestrians, cyclists, and other vehicles are nearby, which offer visual and audible alerts and if necessary, apply emergency braking, according to the release.

Tests in a simulated environment showed that drivers alerted by directional audio correctly identified the nature and source of the hazard 74% of the time and emitting a regular tone from the appropriate speaker enabled the driver to correctly identify the location of the object 70% of the time, according to Ford.

Ford conducted a real-world scenario on the test track with a pedestrian approaching a vehicle backing out of a parking space and alerted the driver with a footsteps alert. “Participants in the test responded positively to the footsteps sound, especially when this intuitive alert was played through a specific speaker,” the release states.

Ford engineers believe the results might be further improved by using 3D spatial sound similar to what’s used in cinemas and gaming to better enable drivers to identify the source of the hazard.