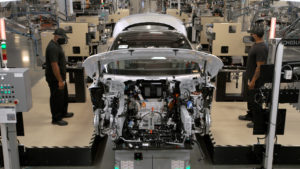 EV startup Lucid Motors has voluntarily recalled 203 of its 2022 Lucid Air sedans, after being notified by a supplier that the front strut dampers may have been incorrectly assembled and could fail.

Lucid said it was informed by its supplier that the snap ring below the front strut damper may have been installed incorrectly, which may result in snap ring failure, causing a sudden loss of ride height and damping force, and possible damage to the front brake line hoses.

“Either of these scenarios increases the risk of a crash,” the automaker said.

Lucid dealers or satellite service centers will inspect and replace the front strut dampers, as necessary, free of charge, Lucid said. It said that it expects to mail owner notification letters on Feb. 24.

The Feb. 16 recall provides a textbook example of how an OEM, in close cooperation with its parts supplier, can quickly and directly reach those owners whose vehicles contain a potentially defective part and have it replaced, if necessary.

According to the Safety Recall Report filed with the National Highway Traffic Safety Administration (NHTSA), parts supplier Bilstein notified Lucid on Jan. 6 that “a failure of Supplier’s vision system” had allowed spring seats to be incorrectly installed on the front damper assemblies.

On the next day, Lucid began a “containment protocol” to quarantine any potentially affected parts. By Jan. 10, Lucid had quarantined all of the parts, and began inspecting all quarantined and already installed parts.

Bilstein certified that, as of Jan. 10, only conforming parts had been supplied to Lucid. On Jan. 13, the issue was brought to the attention of Lucid’s Product Safety Working Group (PSWG). Knowing that Bilstein’s fatigue testing showed that the parts could fail at between 4% and 44% of their design life, the PSWG began analyzing the effect of a failure on vehicle controllability, the likelihood of a spring seat contacting the braided brake lines, and what might happen if they were to do so.

On Feb. 2, Bilstein recommended that the issue be assessed on vehicles, because the problem could happen at “extremely low cycle counts.”

The PSWG met to consider the recommendation, and Lucid’s own engineering analysis, which showed that a strut failure would drop that corner of the car, reducing loading on the diagonally opposite corner, resulting in degraded steering and braking performance.

The group could not conclude if the damper would contact and damage the brake lines, but assumed that the worst case loss of braking ability would be 50% if they did.

On Feb. 9, two days after being briefed by the PSWG, Lucid’s Product Safety Executive Council (PSEC) concluded that Lucid should voluntarily recall the vehicles, out of “an abundance of caution.”

Information from Bilstein has allowed Lucid to pinpoint 188 vehicles built and delivered to customers during the period from Oct. 22, 2021, to Jan. 9, 2022, as potentially having the defective components.

Featured image: A Lucid Air on the assembly line at the company’s Casa Grade, California, factory. (Provided by Lucid Motors)