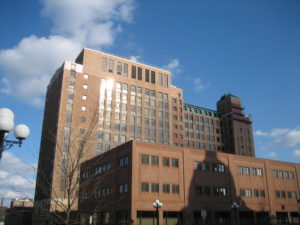 The owner of a Missouri collision repair center is seeking $10 million in punitive damages from State Farm, accusing the carrier of aggressively steering business away from his shop.

The tortious interference lawsuit, The Collision Company v. State Farm, was filed in the Circuit Court of Adair County, Missouri. Besides the carrier, the Missouri director of insurance and three individual State Farm agents are named as defendants.

The suit claims that the number of vehicles insured by State Farm and repaired at The Collision Company dropped from 44 in calendar year 2018 to just 10 in the first four months of 2019. The resulting loss of business led to the closing of the shop in July 2019, the owner, Brad Buck, told Repairer Driven News.

The suit claims that the plaintiff’s “willful, intentional and outrageous” conduct justifies the punitive damages sought.

State Farm told Repairer Driven News that it would not comment on the lawsuit.

Because The Collision Company was not a member of State Farm’s network, the suit alleges, the defendants “engaged in an ongoing pattern and practice of coercion and implied threats to insureds and claimants who had entered into collision repair contracts with Plaintiff and to insureds and claimants who were considering using Plaintiff’s vehicle collision repair services….”

State Farm’s actions were intended to hurt the shop’s finances, the suit claims, and to force other policyholders to use either a member of State Farm’s network or another shop that would accept the insurer’s estimates.

“The Defendants regularly and routinely engage in ‘steering’ in order to punish the noncompliant shops, including Plaintiff’s repair facility,” the complaint states. “Through several common methods, the Defendants will steer insureds and/or claimants to favored, compliant DRPs or other compliant repair facilities through misrepresentation, insinuation, and casting aspersions upon the business integrity and quality of disfavored repair centers, including Plaintiff’s repair facility.”

In other words, “They painted me to be some kind of crook,” Buck said. 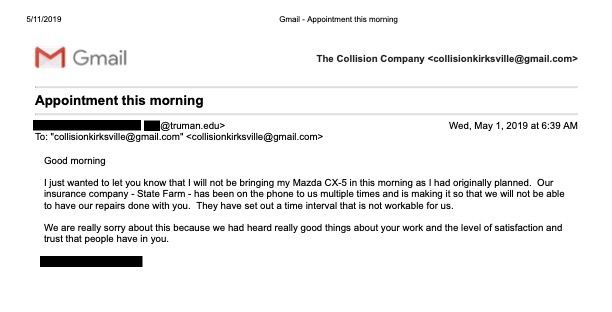 “Asserting that Plaintiff charges more than other shops is often not a function of what the shop actually charges but is the result of the Defendants’ refusal to pay, also a factor wholly and completely within the control of the respective Defendants,” the lawsuit states.

“They would go so far as to say, ‘If you go to that shop, your claim won’t be covered. We won’t pay anything,'” Buck said. He said he has signed affidavits from former customers attesting to that.

Missouri has no specific legislation barring insurers or their agents from trying to influence their customers’ choice of repair shops. The current law states that “Insurers shall not require a claimant to travel unreasonably either to inspect a replacement automobile, to obtain a repair estimate, or to have the automobile repaired at a specific repair shop.”

A bill that would have prohibited any attempt to “persuade, require, coerce, or pressure the vehicle owner to use an auto body repair facility other than a facility of his or her choice after the vehicle owner states a choice” was introduced in the state legislature in 2009, but not enacted.

The suit also accuses State Farm of delaying tactics, and of consequently warning customers that their repairs would take longer at The Collision Center than another shop. These tactics included a delay in payments, and an initial requirement that the shop use “aftermarket and/or imitation” parts that were “not of like, kind and quality” as required by Missouri law, forcing time-consuming negotiation.

Buck said the carrier The Collision Center’s difficulties with State Farm began in 2018. Until May of that year, he said, the carrier had routinely paid his shop’s repair invoices in full, including the unchallenged use of OEM parts.

He said State Farm paid in full for the repair of one customer’s car; when the very same car was again damaged six months later, just half of The Collision Center’s $3,200 bill was paid. “What changed? It was the same [insurance] policy, and our billing practices didn’t change. The customer was just totally confused.”

Buck told RDN that he eventually developed a successful strategy for dealing with State Farm’s refusal to pay: He would repair the vehicle, let the customer take the vehicle home, and sue State Farm on his customer’s behalf for the difference in Adair County Circuit Court. The practice became so successful, he said, that his attorney agreed to take his cases on a contingency basis.

“They wouldn’t do supplements or negotiate. They knew that unless they paid my sheet in full, I was going to sue them,” he said. “Most of it was stuff they didn’t pay for – diagnostic scans, calibration, blind spot monitors, radars. Broken parts they just wouldn’t pay for.”

“We would document everything really well,” he said. Although the approach was a gamble, “we had a lot of success getting paid.”

Buck said most of his short-pay litigation against State Farm and other insurers was resolved in mediation, requiring non-disclosure agreements. “While I understand signing non-disclosures on some of these settlements didn’t help the industry as a whole, at the time I was trying to keep my doors open, which had become difficult due to the amount of steering taking place by State Farm,” he added.

State Farm’s response to his successful litigation, he said, was to begin steering work away from his shop. With the “vast majority” of his shop’s work generated by the defendants’ customers, the tactic did considerable harm to his business.

The suit also accuses State Farm of using a flawed method to identify the market labor rate, and of using that depressed rate to justify refusing to pay The Collision Center’s rates. It maintains that the carrier uses an electronic forum to survey shops, but then “alter[s] the labor rates that the body shops input, decreasing those arbitrarily deemed too high or higher than Defendants wish to pay.”

By altering the rates entered, “Defendants manipulate the results to achieve a wholly artificial ‘market rate,'” the suit states. “The results are therefore not that of an actual survey reflecting the designated market area but created from whole cloth by Defendants, particularly since Defendants determine the market area to be included.”

The defendants “have engaged in an ongoing, concerted and intentional course of action and conduct … to improperly control and depress automobile damage repair costs to the detriment of Plaintiff and for the substantial profit of the Defendants,” the suit charges.

The suit is currently in the discovery phase.