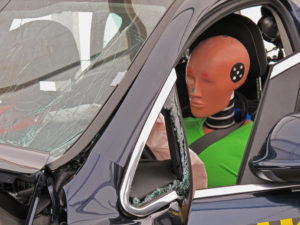 The latest generation crash test dummies by safety testing equipment company Humanetics focus on improved biofidelity, or a more human-like design, as well as a more accurate representation of females.

Data from crash tests not only help OEMs to develop safely designed vehicles and collision prevention systems but is also more evidence for collision repairers to point to when explaining to customers and insurers why they’re following OEM repair procedures since doing so preserves crashworthiness.

The male THOR-AV-50M and female THOR-AV-5F have 3D and 4D imagery capabilities of simulated injuries and onboard data collection systems rather than several cords that can affect how the dummies move in crashes, according to Humanetics President and CEO Chris O’Connor in a recent CNBC interview. They also rotate and turn compared to the previous models that only pivot forward and back. They’re loaded with more sensors as well – 138 in the 5F compared to 12 in the previous model – that measure airbag impact, movement, acceleration, and more.

Both the male and female models have testing capabilities for autonomous vehicles (AVs). Humanetics and automotive test systems manufacturer AB Dynamics use robots to test advanced driver assistance systems (ADAS). But some OEMs, the National Highway Traffic Safety Administration (NHTSA), and the Insurance Institute for Highway Safety (IIHS) still use older-model dummies, according to Humanetics.

The THOR-5F is the first by Humanetics to more accurately match the anatomy of women to address a longtime issue of crash test dummies essentially only being accurate for males. Although O’Connor says both male and female dummies are increasingly less accurate due to as well due to men being taller and weighing more now. In fact, O’Connor told the New York Times in December that car safety features used over the last 50 years – from seatbelts to airbags and dashboard size – have largely been based on the average 1970s man.

“Nothing in the car’s safety is really geared towards us [women],” Humanetics engineer Sarah Michaud told CNBC. “None of our injuries are being accounted for. We are 17% to 19% more likely to die in the same accident as a man and 73% more likely to be injured. That’s because we’re not testing for a woman so we have to move towards this to make sure that we’re not putting women in danger.”

O’Connor said the new THOR-50M is being used by The European New Car Assessment Programme (NCAP) as well as China and Japan’s NCAPs but is yet to be adopted by the NHTSA for its NCAP. In a Feb. 17 webinar, Humanetics Engineering Manager Breanna Greenlees said NHTSA contracted the company to build, test, and deliver three of the female model THOR-5F dummies and has placed another order for five more dummies. Numeric scores of the THOR-5F’s biofidelity were good and were “considerably better” than the previous dummy, Greenlees said.

“The biggest challenge we have, quite frankly, is the slow timing that it takes to get a new product into the marketplace,” O’Connor told CNBC. “We can change technology in a car from one year to the other. We now have hundreds of computers onboard a vehicle and yet the test device for which we’re measuring those advanced technologies is actually 45 years old and that’s really concerning so we have to think about a faster way that governments can act because if the government’s not going to mandate it, then it’s not going to happen.”

IIHS Vehicle Research Center Vice President Raul Arbelaez told CNBC the THOR “breaks too often and we don’t always get the measures we want.” One of those measures is chest injuries, which the latest dummy didn’t a better job of predicting, he said. That and the cost to repair and maintain the dummies are the IIHS’ reasons for deciding to not continue using the dummies.

Honda Motor Co. Crash Safety Department Manager Brian Bautsch told CNBC the company is using THOR-50M dummies in its tests, which are front, side, and rear collisions as well as component-level, such as for whiplash.

“The information that these new dummies give us with all of the sensors and all of the rotational sensors and the different deflection areas that the old dummies didn’t have is very valuable for us because we can get into the details,” he said.