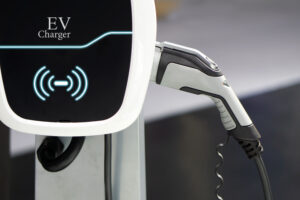 Shop owners and representatives from Audi America, I-CAR, and Enterprise Holdings all stressed the importance of following OEM repair procedures and safety guidelines as well as wearing proper PPE when working on electric vehicles (EVs) during an April 14 panel discussion at the Collision Industry Conference (CIC)’s meeting.

Most of the group – Mark Allen with Audi, Dirk Fuchs with I-CAR, and Jason Norman with Enterprise, along with shop owners Barry Dorn and Ron Reichen as well as Buck Zeise with LaMettry’s Collision – are members of the CIC’s Emerging Technologies Committee. They wanted to cover what shops should expect as EVs begin becoming more commonplace. In fact, as Committee Co-chair Bob Augustine noted, 670,000 new EVs are estimated to come out this year on top of the 481,000 that hit the road last year. 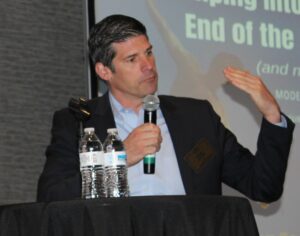 Fuchs said before an EV, which operates on a high-voltage system, is touched collision repairers need to verify and measure bonding resistance to the chassis, the battery charge level, the state of the battery insulation, and check to see if adhesives from previous repairs are on the battery cable. And those are just a few examples of what needs to be checked.

Proper PPE includes a helmet and gloves, he said. The correct measurement tools according to OEM guidelines also need to be used. Metal jewelry shouldn’t be worn around your neck or on your hands or wrists. He also said that even if an EV is drivable after a collision, it may not be safe to drive because it’s unknown if its safety systems are still working.

Allen said the National Highway Traffic Safety Administration (NHTSA) requires warning lights on the dash and that no warning lights means the car has checked itself and it’s safe. However, it’s best to look with your eyes and not your hands – meaning don’t touch it – and to check OEM repair procedures to know what warning lights or no lights mean, he said. 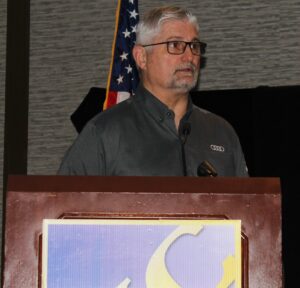 “These are things to look at [and] to understand,” Allen said. “We’re doing research of repair procedures.”

Fuchs drove the point home with one simple statement: “You make a mistake, you are dead.”

The panel also said repairers should keep in mind it’s not simple to replace a high-voltage EV battery pack. It has to be programmed, calibrated, and balanced, which is only possible with OEM software and diagnostic tools. Therefore, it’s best to have OEMs replace batteries. Smaller components, such as an electric heater or charger, can be replaced at shops by those who are properly trained to do so, according to Fuchs.

Decommissioning or de-energizing batteries in order to work on the vehicles has to be done properly or there will be issues, the panel cautioned. With Audi vehicles, Allen said, failing to properly shut the battery down will cause faults that repairers will have to spend time figuring out how to clear. He suggested documenting the steps taken when de-energizing batteries and bringing them back up to high voltage.

Dorn added that some EVs require de-energizing by an OEM dealer and so in the collision shop, they have to be skateboarded around, even for a fender change. A work permit can also be required from OEMs for every day of work that can’t be given electronically, he said.

First thing first when working on EVs is having charging stations and, of course, that takes a lot of electricity. Dorn said most shops likely don’t have enough and upgrades aren’t cheap. The cost to run power for an EV supercharger at his shop and to upgrade its electricity infrastructure was $220,000.

Allen recommended shop owners have an electrical engineer look at their buildings to find out how much power is needed to operate all of the equipment within it along with EV chargers.

Norman noted, “It requires a lot of research and a lot of cooperation between, not just your shop, but …other people that are stakeholders in where that power gets used.” 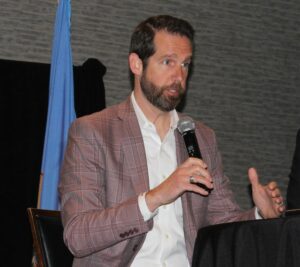 And the amount of power depends on the level of the charger – a higher level requires more voltage and creates a faster charge. A Level 1 (L1) charger comes with each EV and monitors temperatures and the charging amount, Fuchs said. It can take up to three days to charge depending on what level of charge the battery was at when it was plugged in, Allen said. A Level 2 (L2) charger requires 220 volts and takes around eight hours to fully charge a battery. Level 3 (L3) at 120 amps takes 20 minutes to charge.

Keeping the battery cool becomes “super important” at L3 so L3 chargers cool the charging head and the battery, Allen said. However, repairers need to know if the EV they’re working on is liquid-cooled.

Now, having in mind how much power is needed to use EV chargers, don’t forget to take into account how much power the other tools and equipment in your shop will use.

“You have to look at your entire facility’s amperage draw,” Reichen said. “What is your three-phase usage? More than likely your air compressor, you’ve got some resistance spot welders. You may have some other equipment  that’s running on three-phase power.”

Spot welders likely will be hooked up to an extension cord and any time they’re used, power will be drawn down, he added.

“If you have a single-phase MIG welder, you’re pretty safe in your shop with that but if the air compressor’s running and somebody’s running a resistance spot welder, and all of a sudden you plug in a couple of electric vehicles, this is where the challenge comes,” Reichen said.

The panel used a recent example of a damaged EV charger as a cautionary example of ensuring regular maintenance like, as Reichen said, tightening nuts that will loosen because of expansion and contraction caused by heat.

Having a lift that can handle the weight of EV batteries and is wide enough for them is also a must. For example, Audi and Volkswagen EV batteries are the size of a queen mattress and weigh 2,000 pounds, Allen said. Having at least 67 inches between the lift posts is best. Dorn suggested an inground cassette lift because a two-post lift won’t be able to handle EVs. A clear area and level floor is also needed underneath the lift for a battery table. 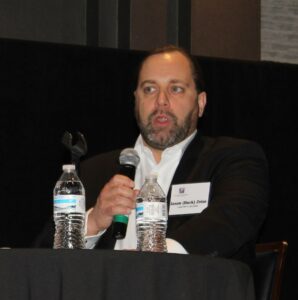 Space in collision repair shops “is always at a premium” but working on EVs often requires more, Reichen said. For instance, batteries that are removed have to be stored outside because they’re flammable.

Over time, Zeise said more will be learned about EVs but repairers should keep in mind that, just like with any other vehicle, parts can fail so making sure repairs are being carried out safely is that much more important.

“Even though the OEMs do an amazing job of making and keeping technicians safe working on these vehicles – they’re very well designed – parts will fail,” he said. “Parts will wear out. …Because of the price of the vehicles and because of the total loss threshold, we’re going to be fixing them at 10 years old. …Our technicians must follow [OEM] procedures every time even though they’re in a hurry, they’ve never seen an issue when they’re doing their testing on a vehicle. It’s going to become more and more important as these vehicles age. we don’t know which components are going to wear out or develop flaws in the future.”

All other photos were taken by Lurah Lowery