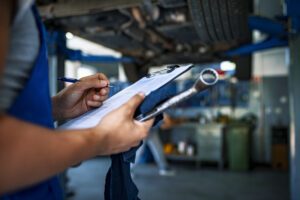 Three recalls – one each from Mercedes-Benz, Hyundai, and Kia – involve malfunctions that could not only lead to owner-involved crashes but could also affect collision repairers who take vehicles for test drives.

A voluntary stop drive recall of 292,287 Mercedes-Benz 2006-2012 model year ML, GL, and R-Class vehicles urges owners not to drive them because issues found in the braking systems may cause the brakes to fail. Recalls of the 2021 and 2022 Kia Forte and Rio and the same model years of the Hyundai Accent have to do with unsecured steering columns.

Mercedes, in a news release about its recall, states “the function of the brake booster might be affected by advanced corrosion in the joint area of its housing.”

The OEM confirmed there had been no crashes, injuries, or deaths related to the issue as of May 12, but advised affected owners to stop driving their vehicles.

“In this case, the brake force support might be reduced, leading to an increase in the brake pedal forces required to decelerate the vehicle and/or to a potentially increased stopping distance. In rare cases of very severe corrosion, it might be possible that a strong or hard braking application may cause mechanical damage in the brake booster, whereby the connection between the brake pedal and brake system may fail. In such a very rare case, it would not be possible to decelerate the vehicle via the brake pedal. Thus, the risk of a crash or injury would be increased. The function of the foot-activated parking brake is not affected by this issue.”

The following models have been recalled:

Mercedes-Benz USA will offer complimentary towing to its OEM workshops. The rubber brake booster sleeve will be removed and the brake booster housing inspected to determine if any parts need to be replaced, according to Mercedes.

Before the issue occurs, the driver might notice a change in the brake pedal feel and/or hear hissing or airflow noises when using the brake pedal, according to Mercedes. Mercedes says notification letters are expected to be mailed on May 27.

A chronology report on the National Highway Traffic Safety Administration’s website under campaign number 22V315000 states Mercedes’ initial investigations began in July 2021 “based on an individual field report from outside the US describing an instance in which a customer allegedly experienced a reduced brake force support.”

“No damages or personal injuries were reported. Parts of the affected vehicle were requested for further analysis. MBAG determined that, in the analyzed case, the function of the brake booster was impaired and corrosion of the brake booster housing was observed. Starting in August 2021, further analyses was conducted regarding a potential failure mechanism, root cause and potential consequences.”

A field study was conducted in September 2021 “to analyze the level of corrosion on brake booster housings in vehicles in different countries and regions worldwide.” Corrosion tests were conducted from November through May 2 when Mercedes decided a recall should be announced. The recall was filed with NHTSA on May 5.

Vehicles not included in the recall don’t have an aesthetic rubber sleeve around the brake booster housing, according to the recall report.

A possible issue with the 2022 Kia Rio was first noticed on March 24 by Kia Mexico (KMX) during a test drive at a plant. On April 13, KMX investigated the noise issue and identifies the problem was due to low torque applied to the steering column U-joint bolt with a supplemental torque wrench at the vehicle assembly plant, according to the chronology report filed with NHTSA.

KMX notified both Product Quality and the Safety Office of Kia North America on April 21 that the issue could affect 2021-2022 Rios and Fortes.

Four days later, the Safety Office completed a review of field data and confirmed there had been no related complaints or warranty claims due to the issue. On April 28, Kia North America decided to conduct a safety recall.

A similar chronology occurred with a 2022 Hyundai Accent vehicle, also in Mexico, and all but two potentially affected vehicles were contained based on a review of manufacturing historical records.

A fourth safety recall, by Rivian, has to do with child safety seats. A total of 502 R1Ts are affected, which is about 10% of Rivian’s total vehicle production to date, according to CNBC. While this doesn’t directly affect repairers, shops that are working on R1Ts and notice child seats in them could let their customers know about the recall. Information about the recall on NHTSA’s website says the pickup trucks may not deactivate the air bag when a child or child seat is in the front passenger seat.

NHTSA provides a VIN lookup tool on its site to access information about recalls.