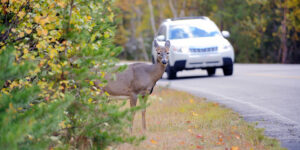 Drivers struck an estimated 2.1 million animals on U.S. roadways between July 2020 and June 2021, an increase of 7.2% over the previous twelve months, according to an analysis by State Farm Insurance.

The carrier theorized that speeding may have been a factor in the increased number of collisions. Noting that 2020 saw the highest number of highway fatalities, according to the National Highway Transportation Safety Administration (NHTSA), State Farm said that speed “could also be a factor behind the staggering animal collision statistics and their recent increase.”

As CCC noted in May 2020, the COVID-19 pandemic led to fewer vehicles on the road, which in turn led to higher speeds and more severe accidents.

The annual analysis made no mention of whether the presence of advanced driver assistance systems (ADAS) features, such as automatic emergency braking (AEB), had any effect on the numbers. According to the Insurance Institute for Highway Safety (IIHS), some front crash prevention systems can recognize animals, as well as pedestrians and cyclists.

One IIHS study found that AEB systems that recognize pedestrians cut pedestrian crashes by 27%. “Even if a front crash prevention system doesn’t avoid a crash altogether, it may still reduce the impact speed, thereby making a crash less severe,” the institute said.

According to the State Farm analysis, repairers in West Virginia are most likely to have taken in a vehicle damaged in a collision with an animal. The odds of such an accident are 1 in 37 there, followed by Montana (1 in 39), South Dakota (1 in 48), and Michigan and Pennsylvania (1 in 54 in both states).

Least likely to have struck an animal are drivers in the District of Columbia, where the probability is just 1 in 569.

The industry claim estimates are based on the number of animal collision claims received by State Farm, the company’s market penetration, and the number of licensed drivers in each state.

Unlike some previous years, State Farm did not provide average dollar amounts for claims. An IIHS study several years ago found that striking an animal “can be costly, but on average it’s not as pricey as colliding with another vehicle.”

A variety of other animals are on the list, the analysis said, including chickens, alligators, bats, cows, pigs, armadillos, bears, donkeys, eagles, horses, coyotes, owls, and cats.

November, October, and December are the months when crashes between animals and vehicles are most likely to happen. That is unchanged from previous years.

State Farm noted that many collisions end up as road kill, while a significant number of human injuries and deaths also result. “From a material perspective, the damage to the vehicles can vary wildly, from a scratch or a bump to a car being completely totaled, depending on factors such as the speed at which one is driving or the size of the animal being hit,” the carrier said.

“Animal collisions remind us of the intrinsic risk that comes with driving a motor vehicle that has the potential of traveling very fast,” Kimberly Sterling, Auto Claims teams lead at State Farm, said in a statement. “Scanning the road while we drive and avoiding speeding, which has been very prevalent during the pandemic, can avoid and reduce the severity of all kind of car crashes, including those where pets or wild animals are involved.”

Featured image provided by the Insurance Institute for Highway Safety

Chart provided by the Insurance Institute for Highway Safety