To address the rising number of pedestrians injured by vehicles and to keep pedestrian fatalities on a downward trend, Volkswagen and other OEMs have been working with local and state academic institutions, government agencies, law enforcement, and others in Michigan under a consortium called the Vulnerable Road Users Injury Prevention Alliance (VIPA).

According to the most recent data from the National Highway Traffic Safety Administration (NHTSA), released in December 2020, a pedestrian was killed every 85 minutes in a traffic crash in 2019. More than 6,200 pedestrians were killed nationwide in 2019 and 76,000 injured. That’s a 2.7% decrease, or 169 fewer fatalities compared to 2018, but injuries increased by 1,000, or 1.3% during the same period of time, according to the NHTSA’s

However, the proportion of pedestrians, motorcyclists, pedalcyclists, and other people killed outside of vehicles as a result of vehicle crashes increased from a low of 20% in 1996 to a high of 34% in 2019. 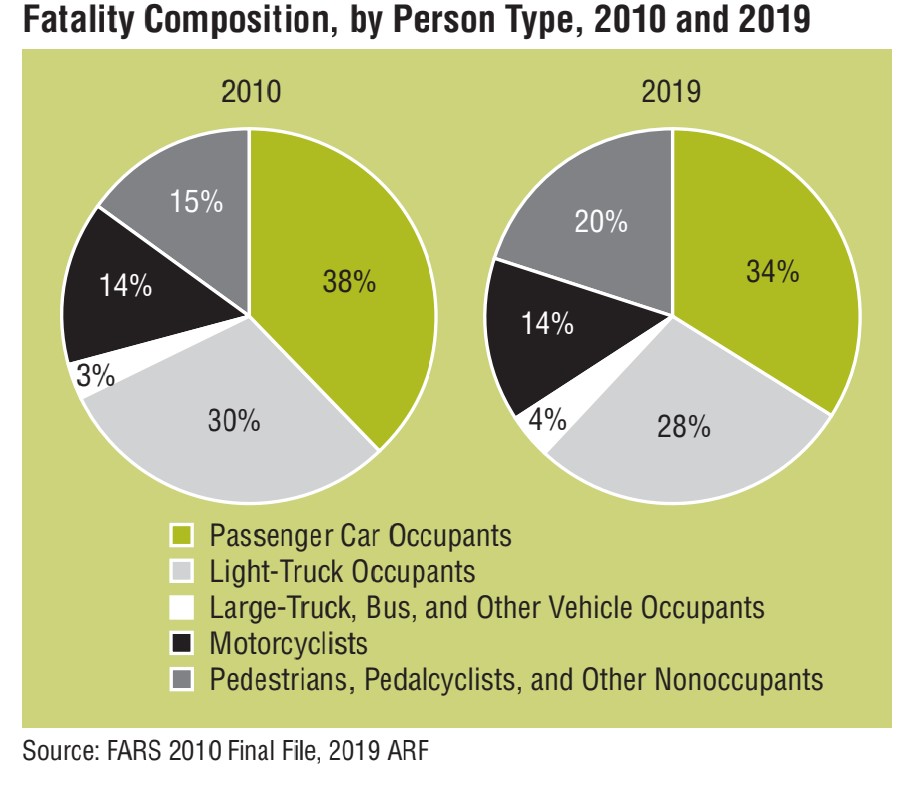 VIPA is “dedicated to gathering and studying detailed data on pedestrian safety to help find ways to reduce pedestrian-related collisions, as pedestrians are referred to as ‘vulnerable road users’ by VIPA safety researchers,” according to a VW news release.

The International Center for Automotive Medicine (ICAM) is at the helm of the research led by Dr. Stewart Wang. According to a summation of VIPA’s early data and insights that were presented during the International Research Council on Biomechanics of Injury (IRCOBI)’s 2019 conference, the alliance is designed “to produce high dimensional data describing crash conditions and VRU [vulnerable road user] injuries.” Data is collected from either a random sample of vehicle crash police reports and medical records or from crash reconstructions, on-scene vehicle photos, and complete medical records including imaging then put into a database.

“Providing this data with partners such as car manufacturers, consumer metric organizations that rate vehicle safety, state agencies, police departments, and medical centres informs policies, contributes to preventive measures, and reduces injury in VRUs,” the IRCOBI document states. “It is the intent of this consortium to provide regular, periodic summaries of the data to the scientific community to enhance global safety efforts. This analysis will briefly report on early observed trends in the VIPA Limited and VIPA In-Depth datasets regarding VRU-motor vehicle interactions, including vehicle descriptions and kinematics.”

An in-depth sample of 137 cases included in the document shows that 20% of the pedestrians struck by a vehicle were killed and 10.2% were severely injured.

VIPA is focused, so far, on data collection and research in Michigan. Wang said the main goal is to “provide actionable data to improve vehicle design and safety-enhancing features for vulnerable road users” adding that the data will be used by “automotive engineers, policymakers, and transportation planners [who] need unbiased, real-world, representative data upon which to make safety-enhancing design decisions to best protect vulnerable road users.”

VM said they routinely access and refer to VIPA’s data to help increase pedestrian safety. Jason Gainey, Volkswagen Group of America Vehicle Safety Office senior manager of vehicle safety and compliance, said the alliance provides unique insights and is one of the only sources of such data in North America.

“Real-world data like this plays a crucial role in determining how policymakers and the industry can better protect pedestrians, cyclists and other road users,” Gainey said, in the release. “It gives us insights to better understand the problem, why and how these collisions with pedestrians are happening and what can be learned to help improve our vehicle designs to prevent, or at least minimize the severity of the interaction between pedestrians and vehicles in the future.”

Similar to how crash safety tests evaluate the ways in which the body reacts to crashes inside vehicles, VIPA researchers studying pedestrian-vehicle crashes do the same for the trauma inflicted on the people outside of the vehicles. Wang has been researching how to prevent motor vehicle crash injuries since the late 1990s when, as a hospital trauma doctor, he founded the University of Michigan Program for Injury Research and Education (UMPIRE), which led to the university’s creation of ICAM.

“In the almost 20 years that UMPIRE has been in existence, thousands of crashes and the data associated with the subsequent interaction between vehicles have been measured, catalogued, and analyzed to better inform the professionals responding to the MVC, the clinicians treating the victims, and the automotive and safety experts who design and engineer vehicles,” Wang wrote. “Together, we have gotten incrementally better at preventing injury!”

As part of the Fall 2021 Unified Agenda, which is a public roadmap for potential future rulemaking, the U.S. Department of Transportation and NHTSA have indicated they are likely to publish a “Notice of Proposed Rulemaking,” which will recommend requirements to further protect pedestrians upon impact with vehicle hoods, according to the VW release.

“This is designed to be done in coordination with Global Technical Regulation No. 9, the ninth part of a United Nations agreement from 1998 that standardized car safety guidelines across the globe and specifically deals with pedestrian safety,” the release states. “Additionally, as part of the Infrastructure Investment and Jobs Act, signed into law by President Biden in November 2021, Congress is mandating that NHTSA issue public notice and comment regarding both crash protection and crash avoidance technologies for future vehicles, a move that could see the number of pedestrian deaths decrease significantly.”

As part of the Infrastructure Investment and Jobs Act, Congress has mandated that NHTSA issue public notice and comment regarding both crash protection and crash avoidance technologies for future vehicles – a move that VW believes could lead to a significant decrease in the number of pedestrian deaths.

The act also requires the U.S. comptroller general to conduct a study that, among other things, will examine “how the practices of the Administration with respect to crash test dummies compare to other programs that test vehicles and report results to the public, including the European New Car Assessment Programme.” That’s a step that VW said could “harmonize” U.S. performance requirements with other countries and unions. Gainey hopes the information will “help the company work with VIPA in improving the safety of all road users, not just those behind the wheel.”