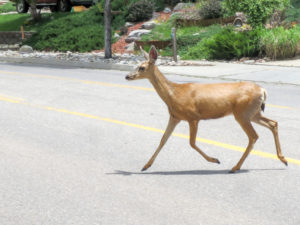 Artificial intelligence object recognition company StradVision on Thursday announced it would add animal detection as a standard feature in its SVNet software.

The company said that the capability could power advanced driver assistance systems to the point that vehicle-to-animal crashes are nearly eliminated.

“With the addition of Animal Detection, SVNet will have the ability to almost completely end the tragedies and property damage caused by vehicle incidents involving animal collisions,” StradVision CEO Junhwan Kim said in a statement. “Upon detection of an animal, SVNet will be able to assume control of the vehicle virtually at the speed of light, in scenarios where human reactions are not going to prevent the collision. We are truly excited about the possibilities for this technology in the U.S., where car-deer collisions are a problem, and in areas of Asia where animals are a common road obstacle.”

StradVision said its technology could permit for autobraking or autosteering around an animal.

“Due to the size and weight of the animals, damage to the vehicle can be costly. Based on numerous studies, the average cost of repairing a vehicle after colliding with a deer was estimated at $1,840. For collisions with elk and moose, the averages increase to $3,000 and $4,000, respectively.”

State Farm last year put the odds of crashing into an animal at 1 in 116.

According to Stradvision, its competitors get tripped up distinguishing animals from environmental items. It said its software could handle “difficult conditions such as rain, snow, fog, darkness, and urban situations” that might stymie its rivals’ AI.

“We have also considered environmental conditions. Even in a road next to trees and branches and other conditions that could hide animals, SVNet maintains a high level of accuracy,” Kim said in a statement. “Other perception solutions are often confused in these situations and accuracy goes down, and you don’t want that when there’s a deer about to pop out of the woods.”

StradVision said it already has “ADAS vehicles” on the road in China and has mass production efforts in China and Europe “in partnership with leading global OEMs and Tier 1 suppliers.” It predicted millions of vehicles would be using its technology for either self-driving vehicles or advanced driver assistance systems by 2021.

Featured image: A deer in a street in Durango, Colo. (KaraGrubis/iStock)