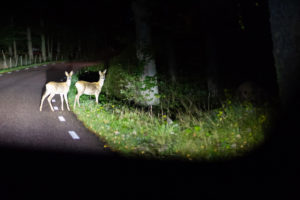 Deer breeding season is well under way, most of the fawn-rearing is over and firearm hunting season is just around the corner in much of America.

Deer are everywhere, it seems, including on our roads.

More than a million auto collisions involving deer happen each year in the U.S., causing an average of about 200 human deaths and 29,000 serious injuries.

While accidents equate to business in the collision repair market, there’s a good chance those human injury numbers and deaths can begin to rapidly decline as artificial intelligence (AI) unlocks new benefits when coupled with older technology.

A proposed solution which might produce such an impact is using AI with with infrared imaging to easier see large animals (or pedestrians) when inclement conditions or poor visibility obscures them from the driver’s vision.

Twenty years ago in the early days of infrared night vision cameras, a driver already straining from darkened conditions also had to try and monitor a display showing the infrared pick-ups. That was some tough multi-tasking for drivers.

But today’s infrared cameras linked to advanced driver-assistance systems (ADAS) offer quadruple the detection range for large animals. Thermal cameras that view infrared wavelengths can detect the heat emitted by animals in the dark no matter the weather conditions. When the infrared cameras are connected to an ADAS system like automatic emergency parking breaks, the system stops the vehicle in its tracks. 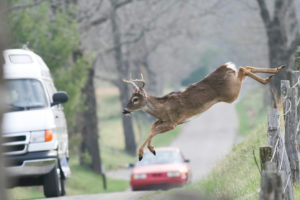 ADAS systems that use convolutional neural networks that enhance visual imagery can pick up large animals, pedestrians, cyclists, vehicles and other road objects in the thermal video stream.

Repair shops generally see about double the usual deer/vehicle collisions at this time of year. More than a few shop owners count on deer season for a revenue stream from an uptick in customers, so this is a bit of mixed news for the industry.

The move to ADAS thermal cameras isn’t going anywhere. Quite the opposite, in fact. Mordor Research recently predicted the market for global infrared vehicle cameras will jump from $6.64 billion last year to $10.68 billion by 2026.

Paul Clayton is the Vice President and General Manager of FLIR Systems, which produces ADAS thermal cameras, including for vehicles.

“We’ve really got to get the word out,” Clayton told DesignNews. “That’s what our mission is. That’s why we gave away our thermal data set. That’s why we’re promoting thermal as much was we possibly can in the marketplace … so we can help save lives.”

Other image: Deer/vehicle collisions cause a yearly average of about 200 deaths and 29,000 serious injuries in the U.S. (Ockra/iStock)