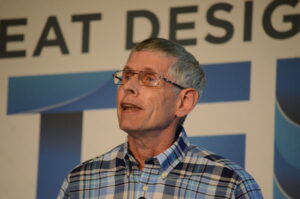 Although aluminum is the lighter material, ultra-high strength steel (UHSS) bumper beams require less total energy consumption over the product’s life cycle, according to results of a sustainability assessment presented at the Great Designs in Steel symposium.

The results were generated by a life cycle assessment (LCA) model developed at the University of California at Santa Barbara (UCSB) for WorldAutoSteel, automotive bumper systems consultant Stu Brown, of Brown Technical Consulting, told the audience at the May 18 automotive materials conference.

The case study shows that a UHSS bumper beam that weighs 7.5 kilograms will require less total energy than an equivalent 6.7-kilogram extruded aluminum bumper beam, when all three phases of its life cycle are taken into account.

Traditionally, he said, decisions by OEMs on materials used are “largely driven by a piece cost per unit of mass saved.” Typically, steel is chosen for lower cost, while aluminum is chosen when reduced mass is important.

Factoring into the equation are the type of vehicle that is being constructed, how close the vehicle is to a desired weight class, and whether there are other opportunities on the vehicle to reduce mass, Brown said.

In contrast, the life cycle assessment model developed by UCSB seeks to quantify the environmental impact of a vehicle over its whole life. It calculates greenhouse gas (GHG) production and energy consumption for three phases: material production and manufacturing, use, and end of life, or recycling.

“The decisions that we make today will affect how people live in the future. And that’s what sustainability is about,” Brown said. “The goal would be to use the least amount of resources in order to maintain a sustainable life for future generations.”

Currently, “The decisions on steel versus aluminum are largely based on the use phase only of the vehicle life cycle,” he said.

Asked whether OEMs are receptive to considering sustainability in materials selection, Brown replied that vehicle teams are usually aiming at specific targets, such as the fuel economy standard. “However, the point of this presentation is that there’s more to this story … that needs to be included and acknowledged.” 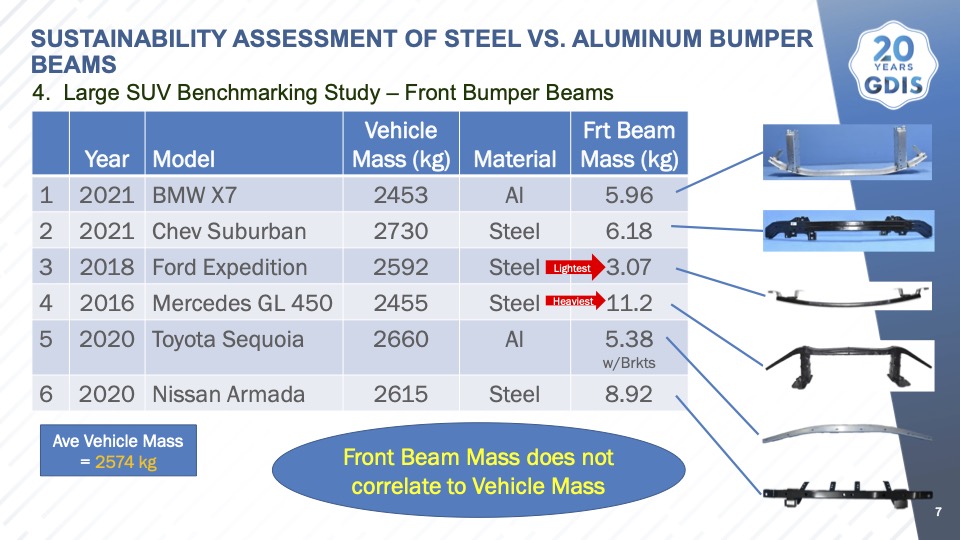 For a large SUV benchmarking study, Brown chose six SUVs, weighing from 2,453 kilograms to 2,730 kilograms. He found that the mass of the front bumper beam had no correlation with the mass of the vehicle; the beam of the 2,455-kilogram 2016 Mercedes GL 450 was the heaviest of the six, at 11.2 kilograms, while the aluminum beam of the 2,592-kilogram Ford Expedition was the lightest, at 3.07 kilograms.

Much of the mass differences between beams was a result of their design. “It really depends on how each vehicle manufacturer strategizes how they’re going to interface the bumper beam to the vehicle structure for their high speed crash” capability, Brown said. “And so you see differences in the design itself. The Mercedes has some pretty significant crush cans and rail extensions, where on the Ford Expedition we just have mounting brackets in that particular case.”

Fed into the UCSB model, the bumper beam results showed that GHG emissions and total energy usage had the same relative relationship to each other. The 2021 BMW X7, with its 5.96-kilogram aluminum beam, was highest in both measures, while the Expedition was lowest.

“The aluminum [beams] may seem to have a lot more greenhouse gas [emissions] or total energy [consumption],” Brown said. “That is true, and that’s largely driven by the refining process from taking bauxite and converting into aluminum. That’s a large amount of electricity as part of that process. That’s what drives the aluminum beams higher.”

In the model, as the recycling rate increases, total energy use decreases. While “there is some disagreement over how much recycled content you can put into these particular products,” Brown said, “in my experience with aluminum beams, the the model tolerances are so tight that we we did not use any recycling at all.” The lower the recycling rate goes, the greater AHSS’s energy advantage over aluminum, he said.