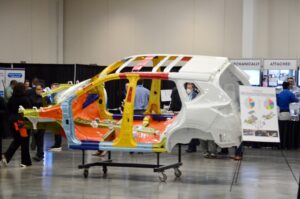 The third-generation Nissan Rogue, introduced for the 2021 model year, incorporates a much greater percentage of advanced high-strength steel (AHSS) than its predecessor, including super high formable 980 and super high formable 1180 materials, according to the senior engineer in the OEM’s Materials Engineering Group.

The conflicting requirements for a roomier passenger cabin, improved performance, and reduced weight led to the choice of AHSS for 35% of the body structure, nearly triple its predecessor’s 13%, senior engineer Weston Lawson told an audience at the Great Designs in Steel (GDIS) symposium on May 18. 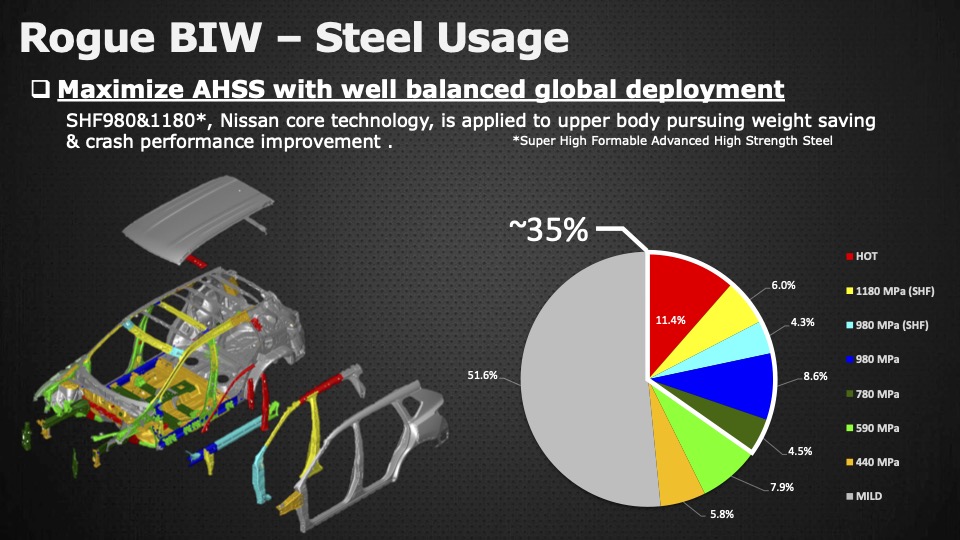 As I-CAR’s Scott VanHulle noted in another GDIS presentation, steel that’s above the 600 mega Pascal (MPa) range is much more likely to crack when straightened, making collision repair for those components a matter of removal and replacement.

Lawson, in response to a question from the audience, said he believes “there should be solutions that are implemented at Nissan dealerships in order to repair these vehicles,” but explained that he does not have much involvement in repair issues.

Repairers can find OEM repair procedures through www.OEM1Stop.com and https://www.nissan-techinfo.com/home.aspx.

The use of AHSS was critical in meeting Nissan’s weight targets, Lawson said. “Due to the increase in size and performance requirements, the mass increase would have been over 96 kilograms [212 pounds] if the same material strategy as the previous Rogue was utilized,” he said.

Further weight savings were realized through the use of aluminum for the vehicle’s hood, doors, and front fenders, and resin for the fuel filler door and rear hatch. “We also achieved mass reduction through the increased usage of joining technologies such as structural adhesives, and from the newly optimized platform,” he said. 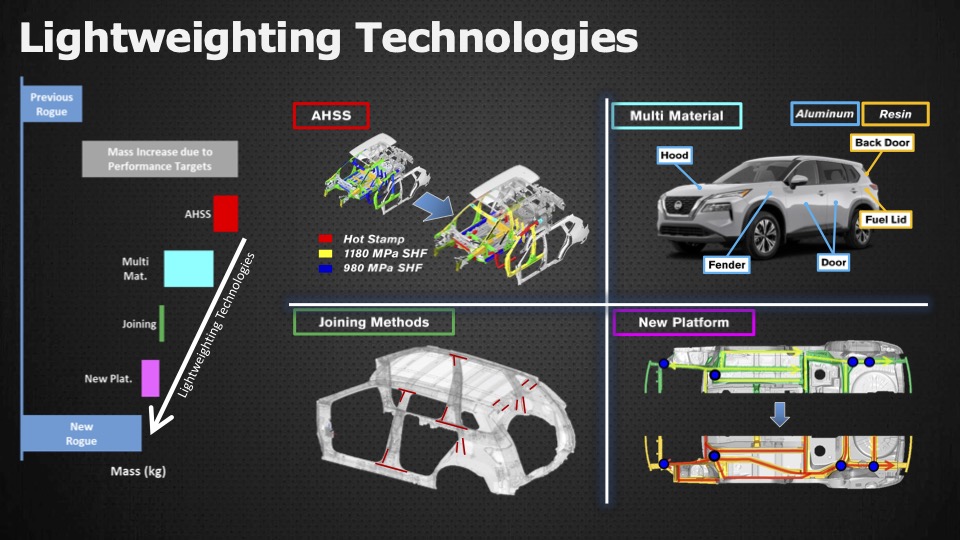 The vehicle’s performance in the 37 mile per hour side impact test was helped through the use of 980 MPa material for the crossmember, increasing the section strength by 52% compared with the previous model, while lowering the section height of the crossmember by 56 millimeters helped crash side load management. “The lower height reduces the bending moment from the side impact and it smoothly transfers the load across the member,” Lawson said.

Reinforcements in the sill section help to prevent collapse during loading, ensuring effective load transfer, he said. Overall, the structure’s reaction force increased by 38% through the material and design optimizations, Lawson said. 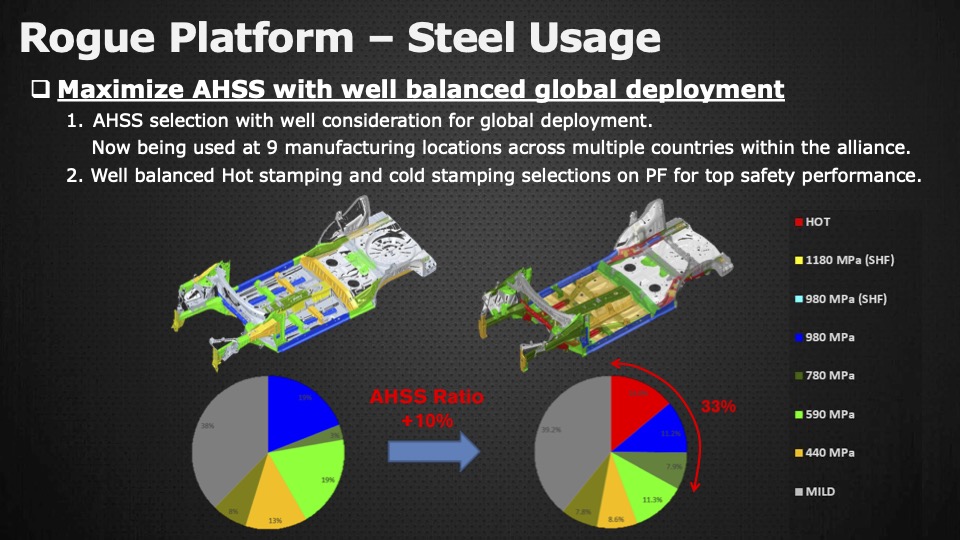 “By utilizing super high formable advanced high strength steel and a cold stamping production process, we can realize the same benefits of hot stamping at a much higher productivity,” he said.

The blank is created by a laser weld process developed by Nissan that allows the hardness across the weld bead to be finely controlled. “This advanced high strength steel solution balances crash safety while providing a mass savings of approximately 15% compared to the previous Rogue design,” Lawson said.

Another technology that enabled the use of super high formable 980 and super high formable 1180 material, he said, is the development of design guidelines for welding stacks that include those materials. These guidelines use weld gun control and panel positioning to prevent unneeded additional tensile stress in the weld stack. 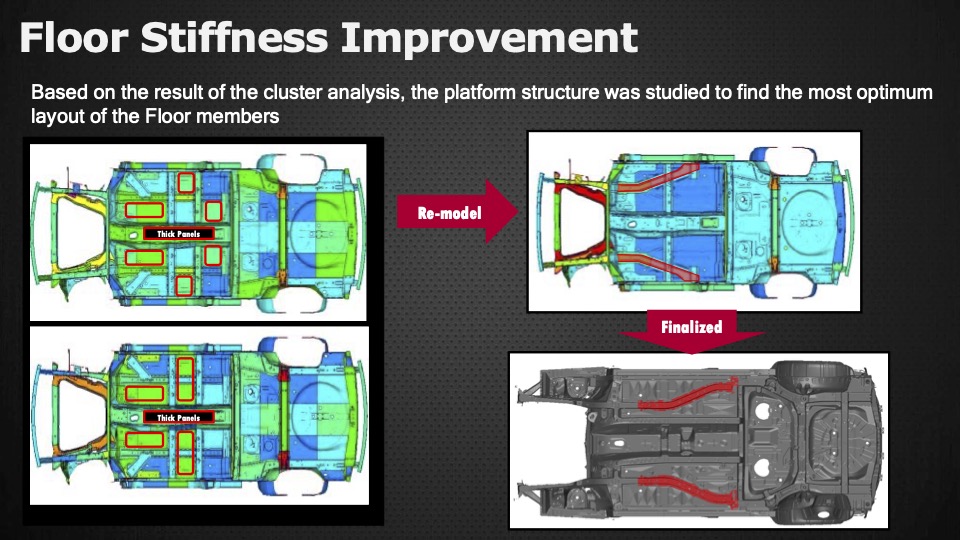 Nissan engineers used cluster computer-aided engineering (CAE) tools in determining the optimal balance of materials, using the results of more than 520 case studies, Lawson said. Although cluster CAE is not a new concept, its use in the automotive segment is “rare and innovative,” he said.

One area where cluster CAE benefited the design was in the Rogue’s floor. “The Initial cluster CAE indicated regions of the floor pan requiring higher thicknesses indicating a higher requirement for reinforcement,” Lawson said.

“These regions were marked up to study as potential routing for floor members, with the platform floor remodel as shown. The design was then finalized to provide the production platform layout with members to achieve the optimized performance across all target parameters.”

Optimization resulted in the use of diagonal side members. “This reduced deflection due to suspension input load, resulting in a 20% increase in torsional stiffness,” Lawson said. 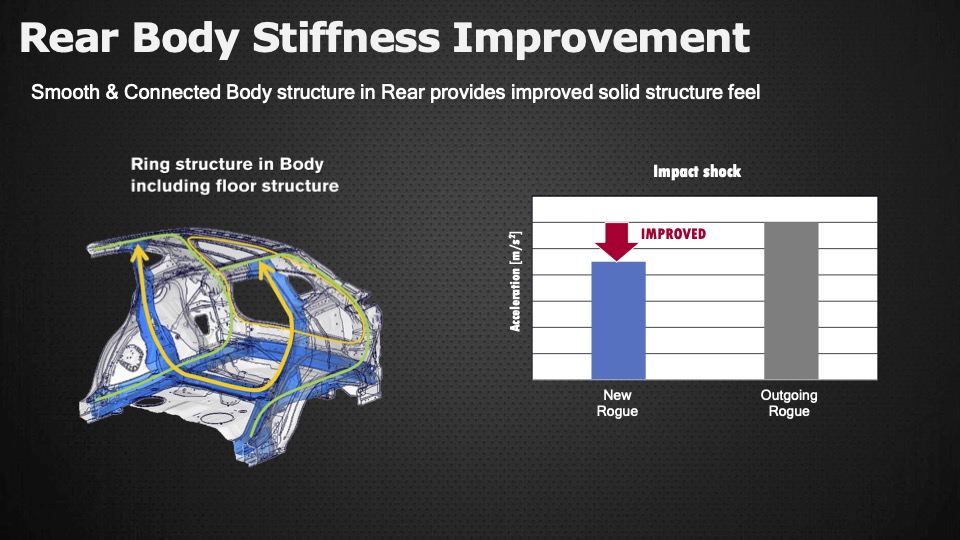 The Rogue incorporates a rear body ring structure to reduce noise and vibration and provide a smoother ride. “By having a smooth and connected structure between the platform and upper body, and eliminating the previously existing bed points from the previous Rogue, we achieved a 30% improvement in stiffness over the previous model,” Lawson said.

Lawson concluded by encouraging the steel industry to continue to develop new grades of AHSS. “Nissan strives to continue to improve performance and lightweight the vehicle through increased usage of advanced high strength steels,” he said. “These innovative designs, as discussed, would not have been possible without the material development.”

Featured image: The body in white of the 2021 model year Nissan Rogue, with components painted to indicate the grade of steel they are manufactured from, is displayed at the Great Designs in Steel symposium in Novi, Michigan. (Dave LaChance/Repairer Driven News)

All graphics courtesy of Nissan