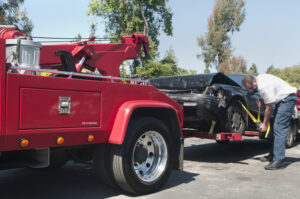 Connecticut tow truck operators will be prohibited from requiring motorists to sign an agreement for storage before the towing job is complete, under a law signed by Gov. Ned Lamont on Tuesday.

As proposed, the legislation, Senate Bill 332, would have allowed operators to require a storage agreement of up to 24 hours as part of the tow job. SB 332 was amended to restrict wrecker operators from requiring motorists to sign agreements for storage of any duration.

Proponents, including insurance industry representatives, said the bill was designed to protect consumers from being coerced into signing a contract as a condition of getting their vehicle towed.

The original bill had been criticized as an attempt to give insurers a 24-hour window to pressure their customers to bring their damaged vehicles to a direct repair program (DRP) facility.

The bill was also amended to make clear that the prohibitions “do not limit the owner and the wrecker from entering into contracts after the tow job is complete.”

Existing law already prohibits tow truck operators from requiring vehicle owners to sign a repair contract before towing, or a repair order or authorization to estimate repairs until the tow job is complete.

The amended bill was approved by the House and Senate in votes of 149-0 and 36-0, respectively.

During a March 9 public hearing before the joint Transportation Committee, attorney Peter Bowman said the bill was “simply a blatant attempt by the insurance industry to circumvent the anti-steering law that has been on the books for decades in Connecticut.”

Bowman argued that the bill conflicted with Section 38A-354 of the state’s general statutes, which guarantees consumers the right to be able to choose where their vehicle will be repaired.

“The consumer, if they can’t have the car touched for 24 hours, now has an extra day of rental, an extra day of storage, and really for no purpose, because there is no public screaming for this bill,” Bowman said.

Brooke Foley, general counsel for the Insurance Association of Connecticut (IAC), said during the same public hearing that AIC was requesting a change in the language of SB 332 “to prohibit a tow vendor from requesting a vehicle owner to sign anything, whether a consent to tow or a repair order, at the scene of an accident or within 24 hours of an accident.”

Foley said it’s “common” for collision repair shops, under such contracts, “to begin repairs on a vehicle in many cases that’s an obvious total loss. Frequently, the repairs include scans which are completely unnecessary.”

The Transportation Committee approved the bill in a 25-10 roll call vote on March 24, although at least two committee members agreed that the language would need more work when it reaches the assembly floor.

The Towing and Recovery Professionals of Connecticut did not testify on SB 332 as filed but objected to a similar bill, SB 921, filed last year. That bill, which also would have allowed tow truck operators to require up to 24 hours of storage, failed to make it out of committee.

SB 332, as filed, had written support from AIC and the American Property Casualty Insurance Association, and was opposed by the owner of Farmington Motor Sports, an auto repair and towing business located in Farmington.