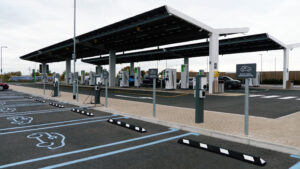 The proposal is FHWA’s plan to support President Joe Biden’s build-out of the first national network of 500,000 electric vehicle (EV) chargers, which are to be built 50 miles apart along designated alternate fuel corridors.

“These minimum standards will help ensure our national EV charging network is user-friendly, reliable, and accessible to all Americans, and interoperable between different charging companies, with similar payment systems, pricing information, charging speeds, and more,” an FHWA news release states.

FHWA says the rule would lay the groundwork for states to build federally-funded charging station projects across a national EV charging network and include workforce standards for installation, maintenance, and operations. It follows the announcement earlier this year of nearly $5 billion for states to use to build EV infrastructure under the NEVI Formula Program, which was established by Biden’s Bipartisan Infrastructure Law.

Charging stations would be required to contain a minimum number of charges and chargers that are capable of supporting “drivers’ fast charging needs” as well as consistency in the installation, operation, and maintenance of NEVI Formula Program projects. It also requires charging stations to have customer support services. The proposed rule supports workforce development and on-the-job training.

“To support the transition to electric vehicles, we must build a national charging network that makes finding a charge as easy as filling up at a gas station,” said U.S. Transportation Secretary Pete Buttigieg, in the release. “These new ground rules will help create a network of EV chargers across the country that are convenient, affordable, reliable, and accessible for all Americans.”

Deputy Federal Highway Administrator Stephanie Pollack added that the funding and framework provided by the Bipartisan Infrastructure Law “gives more people the confidence they need to buy and use electric vehicles to travel from coast to coast and in every state in between.”

And U.S. Secretary of Energy Jennifer M. Granholm noted the departments are working together to tackle range anxiety and “vehicle charging deserts” as well as “boost local economies and strengthen our independence from the volatilities of fossil fuels.”

The Department of Energy, along with U.S. DOT through the Joint Office of Energy and Transportation, also have created the 25-member Federal Advisory Committee Act Electric Vehicle Working Group (EVWG) made up of federal and special government employees. The group is tasked with making recommendations on the development, adoption, and integration of EVs into the country’s transportation and energy systems.

FHWA also released additional resources to help states successfully complete their deployment plans and access NEVI formula funding to build out the charging network. FHWA has more online resources available for states to complete their NEVI formula deployment plans and to access funding including a Questions and Answers page and a technical assistance page to help determine the best locations for charging stations.

The proposed rule is expected to publish in the Federal Register next week. A final rule may be published after FHWA has had the opportunity to review the comments submitted, the release states.

While federal officials are optimistic about the proposed rule, the coalition Charge Ahead Partnership (CAP) says its efficacy depends on each state and offers some ideas on how to more effectively set up the charging network.

“As regulators develop standards for the program – and state leaders develop their implementation plans – Charge Ahead Partnership urges them to incentivize the long-term private investment that is necessary to expand the EV charging footprint throughout the country,” a CAP news release states. “…Rather than steering funds exclusively toward publicly-funded entities or to groups not staking their own capital in the EV charging industry, the FHWA ought to develop criteria that incentivize private investment in the EV charging marketplace.”

CAP urges FHWA to encourage states to think about attracting long-term EV charging investments so that the network can survive after the initial funding stream is spent.

“This influx of federal funding into the EV charging market is a once-in-a-generation opportunity to motivate retailers, businesses and entrepreneurs to enter an exciting new marketplace,” CAP Executive Director Jay Smith said in the release. “However, we should all be thinking beyond this one federal grant program, and use it to drive longterm private investment so that the EV charging market can blossom into a profitable, economically-stable industry that EV-driving Americans can count on to get from A to B.”

Sparking private business competition and innovation will ensure that “recharging an electric vehicle will be as easy as refilling a car with fuel,” he added.

“These federal charging programs were designed to catalyze additional private sector investments that complement the build-out of a user-friendly, cost-saving, and financially sustainable national EV charging network,” the release states.