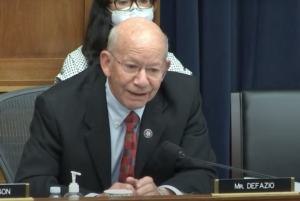 Witnesses told a House Transportation and Infrastructure committee last week that the nation can and must do more to address the surge in traffic fatalities, particularly the sharp rise in deaths among pedestrians and cyclists.

Speakers applauded the inclusion of $5 billion in federal funds to help combat the rise in fatalities in the $1 trillion Infrastructure Investment and Jobs Act (IIJA), and pressed the Department of Transportation to move quickly on safety mandates spelled out in the law.

Much of the discussion on road safety during the June 8 hearing centered on the design of the roads themselves, though some speakers addressed the issue of increasing weight limits on commercial vehicles, and of the need to prepare the transportation network for autonomous vehicles (AVs).

The National Highway Transportation Safety Administration announced on May 17 that an estimated 42,915 people died in motor vehicle traffic crashes last year, a 10.5% increase from the 38,824 fatalities in 2020. It said it was the highest number of fatalities since 2005 and the largest annual percentage increase in the Fatality Analysis Reporting System’s history.

“We are moving in the wrong direction,” said U.S. Rep. Eleanor Holmes Norton, D-D.C., the chair of the Subcommittee on Highways and Transit.

“For years, all we emphasized was fast throughput for cars and trucks,” DeFazio said. “And you know, that ignored a lot of factors that were having to do with safety. And as congestion increased and number of cars increased on the roads, even that was was problematic in terms of additional deaths.”

DeFazio said the U.S. is “kind of pathetic” in its ranking as 64th in the world in fatalities per capita by the World Health Organization.

“People in America are more than twice as likely to be killed on the road compared to Canada, just over the border, and more than four times as likely than in the leading countries of Western Europe,” he said. “These countries have long acknowledged the risk of dangerous road design, embraced robust vision zero and complete streets policies, and provided many safe and convenient alternatives to driving.”

“One size, as the ranking member noted, will not fit all, but we want everybody to identify these areas where they’re experiencing high fatalities and use these federal funds to invest and fix it,” he said. “Get it done. So that’s, that’s very, very key.”

“Vision Zero and Safe Systems have only been in the U.S. since 1994, with most of those cities adopting this approach in the last five to 10 years, yet some cities such as Washington, DC, New York, and San Francisco have already seen double digit reductions in fatalities and serious injuries,” he said.

“Too often, crashes that have maimed and taken the lives of locals simply trying to cross the street connect back to design issues – unsafe crossings, narrow inconsistent sidewalks, and little space for outdoor dining or other local economic drivers that make the city a great place,” Clegg said. “This doesn’t serve Idaho or the small towns in all the other states, nor does it serve the drivers who are often haunted forever by the people they hit.”

The National League of Cities submitted several recommendations, among them that states adopt the “Safe System” approach, as well as other actions for Congress, the administration, state departments of transportation and the road safety community to take.

Advocates focused on the 66% increase in fatalities resulting from crashes involving a large truck since 2009 and the 5,000 lives lost in such crashes in 2021 alone.

“The Insurance Institute for Highway Safety (IIHS) reports that in fatal two-vehicle crashes involving a large truck and a car, 97 percent of the deaths are the occupants of the passenger vehicle. Moreover, according to the U.S. Department of Labor, truck driving is one of the most dangerous occupations in the U.S. The cost to society from crashes involving large trucks and buses was estimated to be $163 billion in 2019, the latest year for which data is available,” Advocates said in written testimony.

“Any proposals to increase federal truck size and weight limits will result in more carnage on our roadways and increased damage to our infrastructure. They must be rejected,” the group said.

Cindy Williams, representing the American Traffic Safety Services Association, told the committee that now is the time to make certain that the transportation network is ready for connected and automated vehicles (CAV).

“Updating the transportation system with these kinds of improvements will not only prepare us for the future but can be helpful to the driving public today. For example, recent studies have indicated that wider pavement markings are beneficial to CAVs, as well as older human drivers. Additionally, CAVs and drivers today benefit from contrasted pavement markings, especially in areas of glare,” she said.

According to studies collected by the Federal Highway Administration, Williams said, lane departure warning systems, which rely on pavement markings, could prevent 13% to 22% of all fatalities if they were deployed in all vehicles.

“These types of vehicle safety improvements strongly rely on investments in roadway safety infrastructure,” she said.