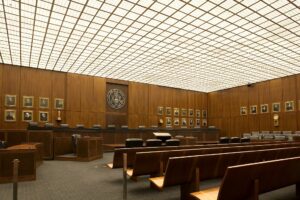 AI photo estimating company Tractable cannot compel arbitration of an intellectual property suit brought against it by CCC Intelligent Solutions because it used a fake name to obtain a license to use CCC’s technology, a federal appeals court has ruled.

Because Tractable’s name does not appear on CCC’s user agreement, it has no right to invoke the arbitration provision of that agreement, the U.S. Court of Appeals for the Seventh Circuit ruled on June 6.

According to a complaint filed by CCC in October 2018, someone posing as “Jason Chen” with “JA Appraisal,” working on behalf of Tractable, bought a CCC One independent appraiser license in August 2017 and passed some of CCC’s trade secrets on to its London-based rival.

“…[S]ome legal disputes are simple. This is one. It is so simple that the courts of Illinois (whose law applies) have not found it necessary to address during the last 80 years the question whether C can claim rights under a contract that has only A and B as parties,” the court said.

Tractable said in a statement Friday that the decision means only that the dispute will proceed in the Northern District of Illinois instead of to binding arbitration.

The ruling “does not reflect a decision surrounding the merits of CCC’s complaint, which we believe is meritless and intended to stifle competition and industry innovation,” Tractable said. “The case remains ongoing, fact discovery has not yet begun, and will proceed to district court where Tractable looks forward to obtaining a favorable resolution to CCC’s unfounded complaint.”

In affirming a decision by the U.S. District Court in Chicago, the appeals court dismissed Tractable’s argument that it and JA Appraisal should be considered one and the same.

“Many a corporation does business under multiple names. So if CCC were to contract with ‘Oreo Cookies,’ Nabisco might legitimately claim to be a party. That Oreo is one of Nabisco’s brand names is widely known. As far as we can see, however, ‘JA Appraisal’ is not known to the public, or the trade, as a name under which Tractable does business,” reads the opinion, written by Circuit Judge Brennan Easterbrook.

In fact, “Asked at oral argument whether CCC could have discovered that Tractable uses the name ‘JA Appraisal,’ counsel for Tractable acknowledged that this was not possible. As Tractable’s own little secret, it does not affect anyone else,” the court ruled.

The court dismissed Tractable’s argument that, under general principles of contract common law, “one side can deceive another about its identity and still have an enforceable contract.”

Language in CCC’s contract “demonstrates that the identity of CCC’s trading partner was a vital element of the deal,” the court said.

“We are inclined to treat [CCC’s clause] as addressing the question whether an identified person can form a contract despite lying about his wealth or other attributes,” the ruling states. “Think: Joe Blow obtains credit by presenting Elon Musk’s financial statement. The ruse does not relieve Mr. Blow of his commitments. Nor does Musk get to claim any benefits of the contract. Substitute ‘Tractable’ for ‘Musk,’ and you have the district court’s ruling.”

The court’s six-page judgment begins with a summary of CCC’s allegations:

“CCC is a leader in this business. Tractable tried to catch up by fraud. It dispatched one of its employees to obtain a license to use CCC’s software. Using a false name, false physical address, and false email address, the employee purported to represent ‘JA Appraisal,’ which he falsely described as a small, independent appraiser.

“CCC issued the requested license. The contract forbids assignment of the license without CCC’s consent and represents that JA Appraisal is not a front for anyone else. The contract also forbids disassembly of the software or its incorporation into any other product.

“Tractable’s agent gave it the software package, violating his promise to CCC. Tractable disassembled the software and incorporated some of its algorithms and features into its own product, violating the license as well as CCC’s rights under copyright and trade-secret law. After some of CCC’s customers reported that Tractable appeared to be using a clone of CCC’s software, CCC filed this suit under the diversity jurisdiction. Tractable replied with a motion to refer the dispute to arbitration, pointing to a clause in the agreement between CCC and JA Appraisal.”

“Had CCC been aware of Tractable’s true intentions, CCC would not have granted Tractable (or ‘JA Appraisal’) a license to use CCC ONE,” CCC wrote in its Oct. 30 lawsuit. “Tractable knew this, and in order to surreptitiously take advantage of the integrated platform of CCC ONE, Tractable registered for the license under the fake name ‘JA Appraisal’ under the customer type ‘independent appraiser.’”

Tractable has maintained that it has done nothing wrong. It said it created estimates in the software and sent them to an insurer, consistent with the license.

“We want to be very clear: Tractable’s AI does not contain any CCC intellectual property,” Tractable founder and CEO Alex Dalyac told Repairer Driven News shortly after CCC’s suit was filed. “We believe related claims are unsubstantiated and will fold under legal scrutiny.”

Tractable told the district court that the company was behaving like any other appraiser using CCC.

“Tractable works with insurers to provide artificial intelligence software to review auto repair appraisals and provide appraisals based on photographs of damage,” the company wrote in a motion. “…Consistent with the terms of the License, Tractable acted as an independent appraiser for the insurer and used CCC ONE to provide estimates to the insurer. Tractable received data from the insurance company reflecting car damage, entered its appraisals of the damage into the CCC ONE software, and communicated the estimates to the insurer.  Tractable communicated the estimates in CCC’s format, which includes CCC’s marks.”

CCC is asking the district court to order Tractable to quit using the CCC ONE platform and CCC’s trademarks, destroy or return anything it received from CCC, and never mislead anyone that Tractable’s products are related to CCC. CCC also seeks statutory, punitive, and compensatory damages and restitution as well as attorneys’ fees.