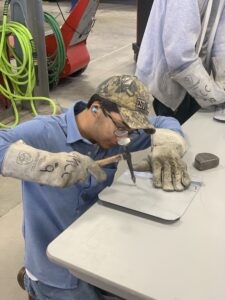 College collision repair department heads and a recent graduate say the industry as a whole needs to get behind pulling kids’ interest to the skills it takes to become technicians at younger ages.

And that’s just what Metropolitan Community College (MCC) in Omaha, Nebraska is doing through its summer camps focused on kids ages 10-12, called “College for Kids,” and “College for Teens” for ages 14-17. The first group of 10-12-year-olds spent a day last week learning about the uses of and differences between rigid and flexible foam with an I-CAR frame rail demonstration. They also learned about tools used in collision repair. The same topics will be covered with a second group this week.

“College for Teens” is also being held for four days this week. Students will learn body repair basics on 10×12 mini hoods with dents in them from body filler to hammer and dolly work, grinding, masking, priming, and painting.

“Hopefully, what that does is it gets them interested in the business,” said MCC Instructor Pat McKibbin, who is teaching College for Teens. “We also get the chance to tour them through the shop and show them what our advanced students are doing.”

The camps show kids that college isn’t just about sitting at a desk and learning math and English — a college education can be hands-on, he added. He said the kids “have a blast” and the camps “get them excited about the business.” McKibbin said he hopes students that participate will spread the word to other kids to get them interested in attending.

Auto collision repair wasn’t on MCC lab technician Cheyenne Purchase’s radar before she found out about the college’s high school program and enrolled. “I ended up being good at it,” she said.

She was successful in the national SkillsUSA competition, placing 12th in her first year and in the top 10 in her second year. She now holds a two-year collision repair degree from MCC and is part of her work at the college this year is helping teach College for Kids.

“I want the industry to keep growing,” Purchase said. “I want them [students] to be successful. You can make a lot of money in this industry so you don’t need a four-year degree. A lot of people don’t realize that. I think it helps to do camps like this. It gets them more involved earlier and it gives them, maybe, a clear path of what they might want to do when they grow up.”

MCC Auto Collision Department Director and instructor Joe Baker said kids are pretty excited by the end to join the college’s program when they’re old enough. This year is the first time the camps have been held since 2019 because of the pandemic.

“[We’re] trying to think outside the box — something to get them engaged — rather than just watching a PowerPoint on what collision repair is,” he said. “Back in 2019, we had one of our students that was going to a local middle school. He talked about how his dad likes cars and he’s interested in cars and he wants to restore a car when he gets older. He actually [in 2021] joined our Career Academy. That’s the best part of it — is seeing some of those really young kids come back.” 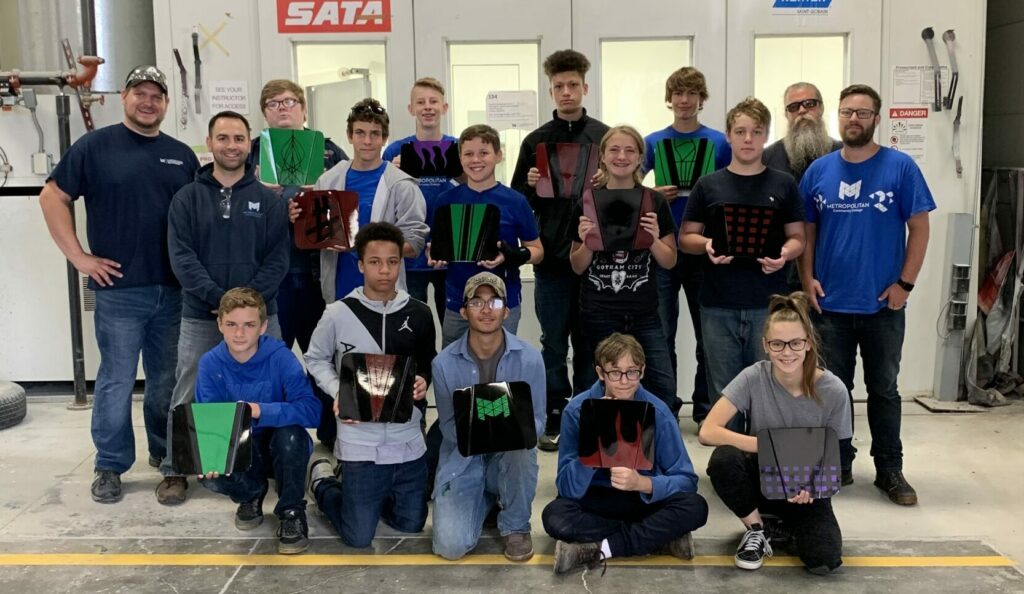 MCC’s Career Academy is a 37-credit-hour program for local high school juniors and seniors that can be enrolled in to explore a career field or work toward a college degree and/or job.

Baker said the summer camps are an important first step “because a lot of these kids haven’t been around it before.”

“Cars aren’t what they were before. The days of working in the garage with Mom or Dad and changing the oil or even changing an air filter — some of these cars you can’t even do that on your own now. So, we’ve had to kind of reinvent the wheel to get younger people involved in stuff like this.”

Similar to what was pointed out during the Collision Industry Conference (CIC)’s April meeting, Baker noted it’s important for shops to be on college advisory boards and to come out and talk to students in collision repair programs at high schools and colleges about job opportunities and their experiences in the industry.

“If you don’t have that as a collision repair program, you’re not going to be doing very well because that’s who’s employing your students,” he said.

In fact, Fayetteville Technical Community College (FTCC) Collision Repair and Refinish Technology Department Chair Doug Irish told RDN the industry’s focus should be on getting students into certificate and degree programs — not on finding jobs for those already in programs.

“If you have a kid that’s good with a computer, likes to build things with their hands, they’re artistic — they like to paint — any of those things that they don’t really know they can have a lucrative career in the collision repair industry by tapping into that skillset,” he said. “It doesn’t do us any good to try to capture them when they’re 17, 18, 19 years old. It’s harder because they, at that point, have found something else that interests them.”

The industry also needs to inform school counselors and parents about what the collision repair industry is — that it’s highly technical and skilled versus the stigma a lot of people still believe that it’s dirty, low-paying, and low-skilled work, he added. It’s also good to let them know a degree can be obtained in two years and will likely lead to making $40,000-$60,000 a year in three to five years post-graduation. And it doesn’t just start with high schoolers, he said. The conversation should start with middle schoolers.

Irish also encourages shops in or near Fayetteville to send their employees and technicians to the college for needed certifications. If he can get enough interest from school-age children, he would like to put together “Summerscapes” classes, or summer camp, in collision repair but participation hasn’t previously been high enough.