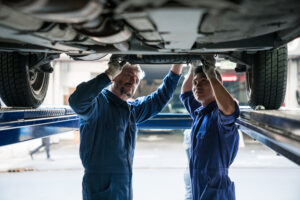 A panel of shop owners and Oklahoma state career program officials agreed last week that outdated perceptions often keep students from considering a career in collision repair and that there are other barriers that also need to be broken down to address the shortage of technicians.

Day said the perception is that shops are dirty and they smell, which is what a lot of parents saw 10 to 20 years ago and are discouraging their kids from getting into the industry because of it. However, he said, that’s no longer the case. Oden agreed that parents are often the problem, but school counselors are too because they don’t know enough about the industry to encourage students to get into it. Amberson said he thinks counselors encourage college over skilled trades because they went to college.

Oden went on to describe a different take she had than the rest of the group when it comes to a lack of automotive technicians. 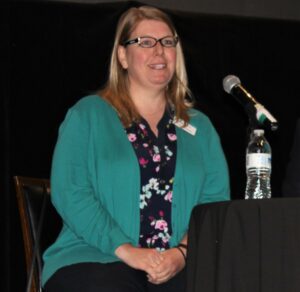 “We do not have a recruiting problem. If you can sell it, you got it,” she said. “We have a retention problem. How we treat our employees is key. If you don’t provide them with means; if you don’t provide them with opportunity, they will look elsewhere. They will tell you it’s because of the dollar. People do not leave a job that they are loved and they feel happy and appreciated. They leave management.”

And instructors, Oden added, “work hard every day to instill the passion they have for this industry into those children and those adults. When they get out into industry and they’re treated terribly they may leave your shop and go down the street to the next shop but if they’re treated terribly at that shop, they will leave the industry. They can get better pay [and] better hours with less hard labor working at Amazon. Once we get them recruited, once we get them passionate about what we do, we’ve got to treat them with respect.”

When meeting attendees were given the opportunity to ask questions and make comments, Wichita Falls Independent School District Career Education Center Auto Collison Instructor Adam Miller spoke up to make some of the same points as the panel members.

“We have to change the whole stigma. These counselors push college,” he said. “Not everybody can make it in college. We have to be able to get these kids to feel like they’re worthy of these kind of jobs. …We’re automotive engineers. You’re an engineer when you work for General Motors and you put a car together. You need to be able to be labeled as an engineer to be able to take that car that’s been wrecked and be able to put it back together. But they’re not. They’re being told that these kind of jobs are for lower-level people and they’re not. These are smart, educated people.”

Day agreed and passed along a suggestion he’s heard of – schools should recruit pre-engineering students. According to Yahoo News, Oklahoma is tied for the fifth-lowest unemployment rate meaning there are more open jobs than people to fill them with engineering having the most significant labor shortage.

James Grimsley, executive director of advanced technology initiatives at the Choctaw Nation of Oklahoma, told Yahoo there’s a nationwide Science, Technology, Engineering and Mathematics (STEM) shortage. “And a lot of the bigger companies are sort of desperate because they would love to work with universities to incentivize universities to produce more,” he said.

Grimsley went on to say that “Oklahoma should focus on extending the pipeline even earlier than from college, exposing students before high school to opportunities for those who follow the STEM path” and “noted the continued lack of gender diversity within STEM occupations.”

Day and Oden said during the CIC meeting that the younger students are exposed to collision repair, the better.

“It’s all about planting seeds,” Oden said. “There are summer camps that the Career Tech. [Department] has put on so kids in fifth and sixth grades can come and do programs and see it. …It’s making parents and counselors aware of the opportunities that are out there.”

Eighth graders also visit Career and Technical Education facilities to see what programs are available and decide when they’re sophomores, during what’s called “Sophomore Showcase,” if they’ll enroll, she said.

She also suggested companies create career paths with compensation package examples to give students an idea of what their future would look like.

Day said it’s important to reach students when they’re younger because “they’re getting a lot less exposure at a younger age than they ever used to [to] what is out there. What are my possibilities?”

Alley said she believes the solution to a lack of skilled workers in the collision repair industry is two-fold: industry professionals should come together to have a “serious conversation” about how much shop technicians should be paid and ways smaller shops can afford it as well as repairers getting involved with apprenticeship programs and local collision repair programs at community colleges or technical schools. 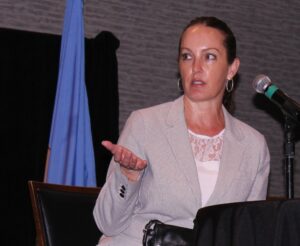 “If you can’t charge what the work needs to cost and there’s that restraint then you can’t pay the people what they need to make to stay in the industry,” she said. “That needs to be, really, a priority of having that conversation.”

And telling parents their kids can make $80,000 to $90,000 a year by age 25 isn’t always the best route to take to attract students to the industry, she added, because it’s often not possible to pay technicians that much and “isn’t a reasonable expectation.”

Day also mentioned a couple of barriers specific to the U.S. Department of Labor in recruiting new collision repairers. He said the department’s “red tape” and numerous, sometimes unnecessary steps, to get an apprenticeship is burdensome and the department doesn’t allow students under 18 years old to work in automotive shops because they’re classified as dangerous jobs. To remedy the latter issue, Oden said she’s helped employers work with a local temporary agency that will take on the insurance liability of underage employees and suggested shops look into that as a possibility to bring in student apprentices and/or employees.

The panel also encouraged shops to participate in state or independent apprenticeship programs. For example, Alley’s shop participates in a national, independent program that she said she’s been very happy with and would like to see more programs like it. Amberson said his shop welcomes apprentices through a state-led program at a local technical college that provides shops with criteria that students should be taught and feedback is given back to the schools as well. 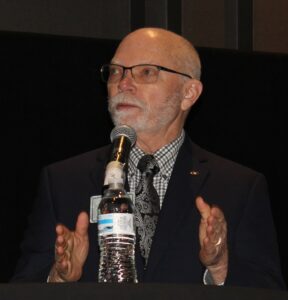 “We’re working harder to get new people than ever,” he said. “We’re reaching out further geographically. We’re more inclined to be at a better introductory compensation level simply because we have to; we have no choice. It’s just more difficult to get people and I think we’ve really come to the conclusion that it’s going to be a bigger challenge, we’re going to have to work harder at it, and we’re going to have to give more money to it.”

Tomorrow’s Technician recently spoke to three automotive instructors, each based in a different state – Florida, Alabama, and Connecticut – to find out more about why there’s a technician shortage. All were united in the stance that “low wages continue to contribute to the technician shortage at a dangerous rate,” according to the article.

“Some of these students are being paid entry-level pay that’s equivalent to what they can earn with something that is less strenuous and less work,” Roxanne Amiot, CTECS Automotive department head at Bullard-Havens Technical High School in Bridgeport, Connecticut, told Tomorrow’s Technician. “They need to see a pay raise, a growth chart of some sort, or we’ll keep losing them quick.”

The article also notes that the misconception exists that automotive technicians aren’t smart. 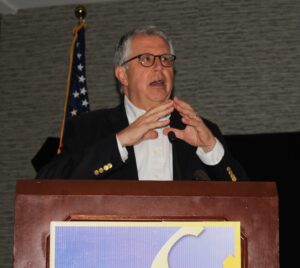