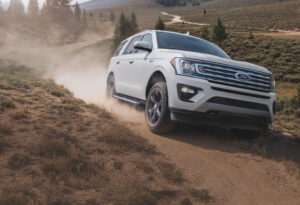 A class action lawsuit has been filed against Ford Motor Co. over engine fires in 2021 Ford Expedition and Lincoln Navigator models.

The suit, filed on June 7 in the U.S. District Court for the Eastern District of Michigan, alleges Ford breached its duties “to provide consumers with a safe car” by selling the SUVs “that were dangerously defective and prone to catching fire, including while driving, while parked but on, and while parked and off.” It also claims Ford failed “to promptly warn consumers and fix or replace” the vehicles.

According to a recall notice posted on the National Highway Traffic Safety Administration’s website, 39,013 Expeditions and Navigators are affected and there is no known cause or remedy. More than 32,000 of those that have been recalled are Expeditions.

“The automaker has confirmed 16 fires, mostly in vehicles that were unattended,” NHTSA states. “Fourteen of these fires were in rental cars. Until further notice, owners of these affected vehicles should not park them inside – they should only be parked outside and away from homes and other structures. Fires have occurred in vehicles that were parked and turned off.”

The warning should also be heeded by collision repairers to avoid fires in their shops or on their properties when housing any 2021 Expeditions or Navigators.

Hargett added that Ford is investigating the cause of the underhood fires and shared the OEM’s recall notice, which states the investigation began on March 24, 2022. She also said Ford typically doesn’t comment on pending litigation and didn’t make any statements about the lawsuit.

“We are absolutely committed to addressing potential vehicle issues and responding quickly for our customers,” Hargett said. “We proactively monitor all potential customer concerns in the field. More than ever, we are looking at all sources of information, including connected vehicle data to identify potential concerns so we can resolve them even sooner for our customers.”

Ford stated in its recall notice that the incidents “are believed to originate in the rear of the engine compartment near the passenger side of the vehicle.”

The lawsuit alleges the majority of the fires occurring in rental vehicles “suggests that the Spontaneous Fire Defect may be related to mileage or use, thereby increasing the risk to Plaintiffs and the Class if they continue to use their vehicles.”

The suit claims Ford “knew or should have known” about the fire risks prior to putting the models on the market and that the SUVs contain a defect in the engine compartment that can cause “spontaneous fire” while driving or parked with the engine running or off.

“Ford does not tell Fire Defect Vehicle owners and lessees just what constitutes a ‘safe’ distance from a vehicle erupting in fire or explain what owners should do with their vehicles if they have no such place to park their vehicles,” the suit states. “This places an unfair burden on class members who are unable to safely operate vehicles they paid a premium for and are unable to park in their garage (and may have to park quite far away from their homes to park away from other vehicles).”

Ford hasn’t done “the right thing” and offered owners and lessees a buyback of the vehicles or loaner vehicles so the recalled vehicles can remain parked, according to the suit.

“Because of Ford’s omissions and misrepresentations regarding the Spontaneous Fire Defect and failure to act more quickly in disclosing and providing a remedy, it has violated state consumer protection acts, been unjustly enriched, and breached implied warranties of merchantability. Plaintiffs and other owners and lessees of the Fire Defect Vehicles have been injured in fact, incurred damages, and suffered ascertainable losses in money and property.”

There are three proposed class representatives — Florida resident Jessica Stahlman, New York resident Jeremy Sessler, and North Carolina resident Ronald “RJ” Smith. The plaintiffs are suing as a nationwide class and state subclasses. The nationwide class includes all persons or entities that purchased or leased 2021 Ford Expeditions or Lincoln Navigators. Each state subclass includes all persons or entities that purchased the vehicles in their respective states.

The nationwide class claims Ford is in violation of the Magnuson-Moss Warranty Act, which “provides a cause of action for any consumer who is damaged by the failure of a warrantor to comply with an implied warranty” and that the OEM has been unjustly enriched.

Stahlman and her husband own a 2021 Expedition for use by their dry cleaning business but since learning about the recall have quit using it for their safety and the safety of their employees. However, they continue to pay for the SUV and to insure it while not being able to park it off or away from their business because of insurance purposes, according to the suit.

The Florida subclass claims Ford is in violation of the state’s Unfair and Deceptive Trade Practices Act and has breached Implied Warranty of Merchantability under Florida law.

Sessler leased a 2021 Lincoln Navigator as the primary vehicle for his wife and three young children but “is now concerned about driving the Fire Defect Vehicle due to the dangers resulting from the Spontaneous Fire Defect.”

“Plaintiff has three young children that all ride in car seats and extracting them all safely and quickly in the event of an engine fire would be
difficult if not impossible. In addition, it is inconvenient and unsafe for Plaintiff to park the Fire Defect Vehicle on the street — under Ford’s instruction to park outside and away from structures and other vehicles — with three small children that must be loaded into the vehicle daily.”

The New York subclass claims Ford is in violation of the state’s deceptive acts and practices law, False Advertising Act, and has breached Implied Warranty of Merchantability under state law.

Smith and his wife leased a 2021 Lincoln Navigator as the primary vehicle for his wife and three young children and have “no such reasonably accessible spaces” near their home to safely park it to avoid a structure fire and “if Plaintiff switches vehicles with his wife, he will incur more than double the fuel costs to commute to work.”

The North Carolina class claims Ford is in violation of the state’s Unfair and Deceptive Acts and Practices Act and has breached Implied Warranty of Merchantability under state law.

The suit notes that if the plaintiffs had known about the fire risk they wouldn’t have bought the vehicles and that “on information and belief” new vehicle limited warranties for both models should include the fire defects.

Plaintiffs further allege that Ford marketed the 2021 Expeditions and Navigators “as family-friendly, functional, safe, and reliable, and knew these attributes were material to consumers.”

“Consumers paid a premium price for the Fire Defect Vehicles,” the suit states. “The Manufacturer’s Suggested Retail Price (“MSRP”) for the 2021 Ford Expedition starts at $51,320 for the XL Fleet base-level trim and goes up to $78,070.12, and the MSRP for the 2021 Lincoln Navigator starts at $78,400 for the base-level trim and goes up to a whopping $103,550. Plaintiffs and putative class members paid the premium prices commanded by the Fire Defect Vehicles because of these qualities touted by Ford.”

Some owners are selling or trading their Expeditions and Navigators “at greatly reduced prices because of Ford’s conduct,” according to the suit.