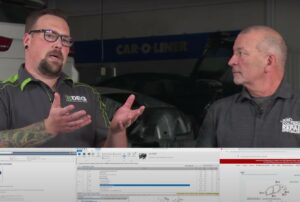 Looking to help your shop’s repair planners learn the ropes of researching and documentation? The Society of Collision Repair Specialists (SCRS) and the Database Enhancement Gateway (DEG) have some tips for just that.

DEG Administrator Danny Gredinberg said in a recent SCRS Quick Tip video that the best setup for repair planners includes two computer monitors — one screen to look up OEM repair procedures and the other for pulling up estimating systems. Tutorials on how to use third-party OEM procedure programs are a great way to help planners get their start as well, he said. I-CAR and Collision Advice provide tutorials on how to use OEM sites to research procedures.

“Once they’ve gotten the information out of the repair sites, then it’s time to read it, understand it, and apply it to the estimating line notes so that way it tells a story of the repairs being done following the OEM procedures,” Gredinberg said.

He also reminded viewers that the time shops invest in researching repair procedures is a not-included operation by all three estimating systems — CCC, Audatex, and Mitchell.

In a July 11 Estimating Tip provided by DEG, Gredinberg wrote that when preparing estimates it’s important to realize that some graphics could additional labor notes that are specific to all the components in the graphics versus an individual part footnote or collision estimating guide (CEG).

For example, since bumper absorbers are commonly not included per the Mitchell CEG, the footnote showing the absorber as part of the bumper section is then considered included labor, Gredinberg wrote.

In a July 5 Estimating Tip, Gredinberg lets shops know that CCC/MOTOR considers pressing out a damaged bearing as a not-included operation. This tip was based on an inquiry to DEG about whether the pressout of the bearing and pressing in a new bearing on a 2015 Kia Soul pressing of bearing is included or not included.

According to DEG, Motor responded: “The estimated work time applied to the Hub & Bearing is for replacement of all new parts. The time to remove the Hub from the Bearing is not included and would be an on-the-spot evaluation. Pressing in the existing Hub into the new bearing would be an included operation.”

And speaking of included and not-included operations, Gredinberg in the most recent SCRS Quick Tip video, defines what part of AC leak tests are included and what isn’t.

When OEMs require an AC leak test after the system has been recharged, leaks are to be checked for at the service ports only.

“Diagnostic steps that may include checking the compressor, AC lines, [and] condensers that might be identified by the manufacturer would be a not-included operation,” Gredinberg said.