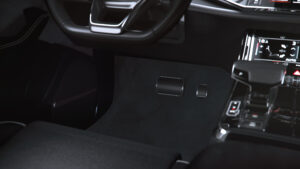 Automotive supplier Hella has been commissioned to develop and produce the world’s first totally electric “brake by wire” system for large-volume production, with rollout expected to begin in Europe in 2025.

Unlike conventional brake systems, the technology transmits the braking commands purely by electric means, with no mechanical connection between the pedal and the rest of the system.

The electric brake pedal sensor is being developed at Hella’s headquarters in Lippstadt, Germany. The first customer for the system will be a German OEM, which Hella did not identify.

Some OEMs currently employ brake-by-wire technology, but all of these systems maintain a physical connection between the pedal and the brakes themselves as a backup in the event of a failure. The Hella system has no such connection.

“With our by-wire technology, many bulky hardware components are eliminated. The brake rod, for example, has always been a bit of a trouble spot in vehicle design,” Björn Twiehaus, who is responsible for the global electronics business on the Hella Management Board, said in a statement. “With our brake-by-wire pedal, we are now able to resolve this aspect and thus create completely new possibilities to design the vehicle interior in a highly flexible way.”

“Hella has been one of the world’s leading suppliers in the field of pedal sensors for more than two decades. Building on this, we have now set another technological milestone with our brake-by-wire solution, which will become the standard in all vehicle segments in just a few years,” Twiehaus said.

The Tier 1 supplier said that the brake-by-wire pedal simulates the feel and behavior of a conventional brake system, in which the pedal works through a mechanical rod to apply the brakes.

Because the system is entirely electric, it can easily support the functions of automated driving, and will allow the brake function to be customized to suit every driving scenario, Hella said.

The lightweight plastics used in the brake-by-wire pedal can reduce component weight by 20%, it said. “This can help to increase the range of electric cars and also to reduce the CO2 emissions of vehicles with combustion engines or hybrid drives while at the same time maintaining high performance and functional safety. And into the bargain, installation costs and the number of variants involved are reduced,” Hella said.

A spokesman for the company told Repairer Driven News that the system will incorporate safeguards against failure.

“Obviously, braking systems require the highest level of functional safety in order to ensure that any potential fault does not result in an accident. Therefore, our brake-by-wire pedal sensor uses our fail-operational electronics – which means: they are designed with a redundant architecture consisting of two independent sensors delivering a robust and undelayed signal to the braking system, so that unrestricted vehicle control is provided in every situation,” Daniel Morfeld said.

Hella said brake-by-wire technology is part of the development of the “Cockpit of the Future” by Hella and its parent company, Faurecia, under the umbrella of the Forvia Group.

“Together with Faurecia’s display and interior solutions and also with our lighting and electronics expertise, we are strengthening our base as a systems provider in this field of the future,” Twiehaus said.